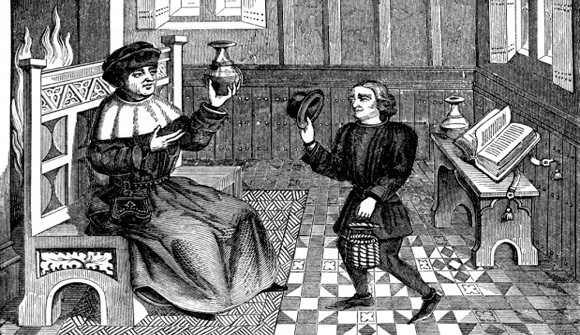 Fed Finds Elixir for Tapering QE as Markets Embrace Rate Outlook … For six months, the Federal Reserve has struggled to engineer a pullback of its bond-buying program without unhinging financial markets. Yesterday, the Fed did it. After the Fed and Chairman Ben S. Bernanke expressed enough confidence in the jobs outlook to taper the pace of asset buying and extended the timeline for zero interest rates, U.S. stocks surged to record highs and 10-year Treasury yields rose just six basis points. – Bloomberg

Dominant Social Theme: The Fed always gets where it needs to be.

Free-Market Analysis: Once again we are exposed to a triumphant article about the eventual infallibility of the Fed. Yes, Ben Bernanke did initially have trouble initiating a "taper" but now he's found the right recipe.

The Fed has found the "elixir." It can disentangle itself from the rankest form of monetary stimulation without interfering with the upward appreciation of markets.

And please note this ascension is obviously appropriate and necessary. Anything else, as the Bloomberg article tells us, would result in an "unhinging."

That's the opposite of Bernanke's experience in June, when global equity markets lost $3 trillion in the five days after he said he might reduce his $85 billion in monthly bond purchases this year and end it by mid-2014.

Since then, policy makers have tried to convince investors that tapering quantitative easing isn't tightening policy. They succeeded yesterday by coupling a $10 billion reduction in monthly asset buying with a stronger commitment to keep interest rates at record lows, according to Ward McCarthy, chief financial economist at Jefferies LLC in New York.

"The Fed is trying to get policy back in the direction of normal without causing setbacks in the economy and too much distress in financial markets," said McCarthy, a former Richmond Fed economist, who predicted the Fed would taper.

"Based on the initial reaction, they found a magic elixir." The Standard & Poor's 500 Index rose 1.7 percent yesterday to 1,810.65, its biggest gain in two months. Yields on the benchmark 10-year Treasury note climbed 0.06 percentage point to 2.89 percent, according to Bloomberg Bond Trader prices.

This article is generally packed with elite dominant social themes. The financial bubble is deemed "normal." And if equity prices head downward, that's considered "distress." Distress for whom?

The whole idea apparently is that up is good. And damn the consequences.

Also, please notice that the Fed has done exactly what we predicted it would do: It's found another way to prop up markets. The article even admits it. In order to "taper," the Fed has had to make it clear, emphatically, to market participants that interest rates will remain at low points.

What this does, of course, is encourage terrific risk-taking, which older versions of the Fed were loath to support. In fact, Fed meetings once were so shrouded in secrecy that few knew when or if the meetings took place.

This approach to finance was deemed reasonable at the time. One of the big criticisms of the Fed – of modern central banking generally – is that its repetitive price fixing allows insiders to game the system.

If you are assured, for instance, that the Fed will keep rates down, there are certainly creative ways to exploit this certainty.

Ironically, what is called forward guidance is all about providing the markets with confidence of central banking behavior. This is because bankers don't want to see markets destabilized and the "recovery" derailed.

But this strategy acknowledges the fragility of the recovery, which is no recovery at all but merely indiscriminate inflation of various asset classes.

Little noticed is how far central banking has sunk as a concept. The idea once was that powerful central bankers would work behind the scenes to make sure that various markets were stable and fair.

Nowadays, central bankers work to ensure that markets – especially stock markets – are propped up so that the appearance of an improving economy can be maintained.

And far from working in secret, this generation of bankers is desperate to reassure investors that optimal conditions for continued equity gains will be continued.

This is, in fact, what the Bloomberg article is telling us. The Fed's magic elixir is simply the ability to assure top investors that they can continue to shovel money into the stock market without undue risk of reversals.

How this qualifies as the beginning of a "recovery" is anybody's guess. Those affiliated with the Fed, or writing about it, seem to feel somehow that assuring markets of a continued upward trend is some sort of significant victory.

But it is not a victory. Forward guidance itself is a kind of white flag, an admission of the reality of what central banking does, which is to manipulate money in order to stabilize the current and increasingly corrupt regime.

This is indeed a Wall Street Party that Fed bankers and their journalistic minions are maintaining. And, with others, we intend to exploit it as long as we can. But how long it lasts is anybody's guess. And the hangover will be fierce, indeed.

We are not supposed to think about that. We are supposed to be awed that the Fed has concocted yet another elixir.

One day, the Fed surely will mislay the recipe. What then?