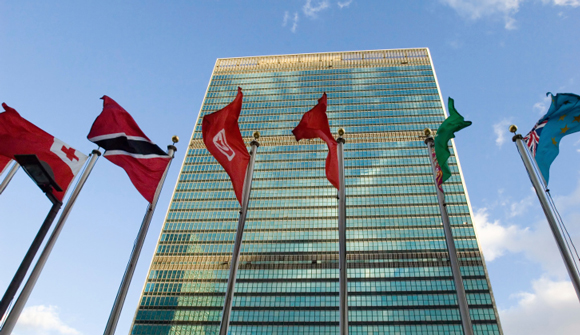 UN climate talks fall apart as 132 countries storm out … Poor countries pulled out of the United Nations climate talks during a fight over transferring wealth from richer countries to fight global warming. The G77 and China bloc led 132 poor countries in a walk out during talks about "loss and damage" compensation for the consequences of global warming that countries cannot adapt to, like Typhoon Haiyan. – DailyCaller

Dominant Social Theme: This is just a glitch on the way to a comprehensive global warming policy.

Free-Market Analysis: We are certainly seeing an elaboration of the global warming meme. The damages are increasingly controversial. Money is an end game, though not THE end game.

The argument is seen to be one of the "rich countries" versus the "poor countries." And perhaps this is the crux moment for global warming. If an arrangement cannot be reached, the entire dominant social theme may begin to collapse.

But an arrangement will be concluded, no doubt. It will encompass money, but much more as well. And as we will explain, money is not really the goal, though in the short term it is the desired object. Here's more:

The countries that left claim to have the support of other coalitions of poor nations, including the Least Developed Countries, the Alliance of Small Island States and the Africa Group. Poor countries have demanded that the developed world give them $100 billion annually by 2020 to prepare for the impacts of global warming, such as heat waves and droughts.

Brazil even put forward a proposal last week that would have made rich countries pay for historical greenhouse gas emissions. "The US, EU, Australia and Norway remain blind to the climate reality that's hitting us all, and poor people and countries much harder," said Harjeet Singh, spokesperson for ActionAid International.

"They continue to derail negotiations in Warsaw that can create a new system to deal with new types of loss and damage such as sea-level rise, loss of territory, biodiversity and other non-economic losses more systematically." Rich countries have so far resisted these proposals. Austria, Europe and the U.S. have all argued that the issue should be addressed in 2015, when the world is set to discuss a comprehensive climate agreement.

Developed countries have also banded together to block attempts to create a whole new bureaucracy to handle climate "reparations" to poor countries. "The EU understands that the issue is incredibly important for developing countries. But they should be careful about … creating a new institution.

This is not [what] this process needs," said Connie Hedegaard, European Union climate commissioner. "The whole financing discussion reflects that the developed world knows it has special responsibility. Most of what has been emitted has been done by us."

U.S. diplomats were specifically instructed by the Obama administration to oppose any attempts to create an independent fund for climate reparations from rich countries to poor countries.

That rich countries don't want to be held directly responsible for the damages of global warming is perhaps not surprising: That is not the purpose of this meme. It is not about money, after all, and never has been. It is about control.

The idea is to create a marketplace for carbon credits and to install a global metering system to comprehensively monitor people's use of energy. But the idea of a separate fund to compensate "poorer countries" is being resisted because it will inevitably take the focus off necessary regulations.

The goals of those behind the global warming/climate change meme are specific and disciplined. The damages are to be decided as part of a larger and more comprehensive settlement that will be about a lot more than money.

Then there is the dialectic itself. The political battles now taking place at the UN surely distract from the question of whether or not global warming exists.

Global warming critics point out, for instance, that temperatures have not risen for 16 years; proponents claim that the missing heat has been absorbed by deep oceanic sinks and will certainly reappear at some point within the larger climate cycle.

Most people in the West are now fairly skeptical when it comes to global warming. It ranks low on their list of concerns, surveys show. But the battle will not be won or lost within the context of arguments about the validity of the meme. The battle will be won or lost on ground that is more favorable to the elite behind this promotion.

That ground is UN regulatory ground. Here, countries meet and seriously discuss global warming memes that have been discredited in the larger electorate. Large and dramatic behaviors play out in such a way as to reinforce the dominant social theme regardless of their veracity.

The meme does not abate because it is no one's interest that it does. And thus it will continue.