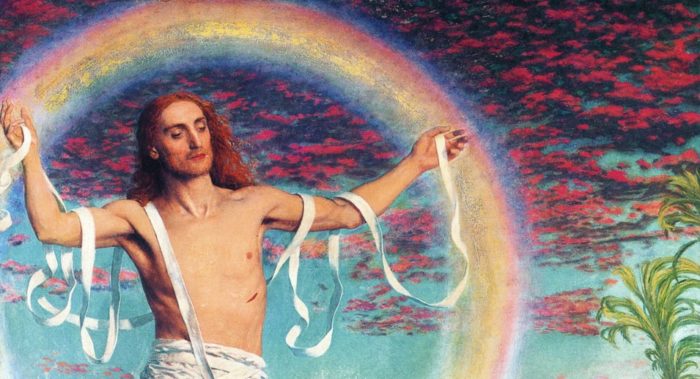 “Religion is the sigh of the oppressed creature, the heart of a heartless world, and the soul of soulless conditions. It is the opium of the people” -Karl Marx

Researchers call it an exchange model of religion: If people can get what they need from the government (be it health care, education or welfare) they’re less likely to turn to a divine power for help, according to the theory.

But are people actually more likely to drop religion in places where governments provide more services and stability? In a new paper, psychology researchers crunched the numbers — and found that better government services were in fact linked to lower levels of strong religious beliefs.

Those findings held true in states across the U.S. and in countries around the world, researchers said.

The article, “Religion as an Exchange System: The Interchangeability of God and Government in a Provider Role,” was published April 12 in Personality and Social Psychology Bulletin.

What they are really highlighting is how the government undermines traditional community institutions. The church has been one of the most important neighborhood safety nets for centuries, possibly millennia. But these warm, personal institutions are being replaced by cold government programs. People are treated like numbers, not neighbors. People are provided help not from the charity of others, but from the forced redistribution of wealth.

This tears apart the foundation of why churches have always worked so well as a safety net. And it really doesn’t have much to do with religion. It has much more to do with community and strong neighborhood social ties.

I am not convinced that the researchers were measuring what they thought they were measuring. Going to church and participating in a religious community is not so clearly a deeply religious experience for all attendees. Community and social ties are likely the main reason most people gravitate towards religion.

Yuval Noah Harari argues in his book Sapiens that after industrialization, government and industry teamed up to get people hooked on markets and government instead of family and community. They knew that they had to replace more than the physical things that people depended on.

Consumerism and nationalism work extra hours to make us imagine that millions of strangers belong to the same community as ourselves, that we all have a common past, common interests and a common future.

And the community has no control over who receives its help. In a community, you can tell who needs help, and who might be gaming the system. You can isolate the type of support that neighbors need most. Instead of handing out government dollars to buy fruit roll-ups and Capt’n Crunch, a family might offer to cook dinner for another family or take their kids in for certain meals or extended stays.

There are actual “regulatory” mechanisms at work in communities and small-scale warm institutions like churches. For instance, Sapiens also point to gossip as an important social regulator. It is a way of making sure people in your social group know who they are truly dealing with.

But the researchers really seemed to miss the aspects of community that religion provides, and focus only on the “supernatural” part of the equation.

“If a secular entity provides what people need, they will be less likely to seek help from God or other supernatural entities. Government is the most likely secular provider,” the researchers concluded. “We showed in two cross-sectional analyses, one using world countries and one using states in the United States, that better government services were related to lower levels of religiosity.” …

“If the benefits acquired in the religious exchange can be acquired elsewhere, religion becomes less useful,” researchers wrote. They added that, when it comes to the role religion plays in establishing predictability and control in society, “the power and order emanating from God can be outsourced to the government.”

Again, it is not God giving order and predictability, but the close-knit community. Sure, they may be basing their system on God’s law. But the government is undermining community. They are destroying the long-tested method of providing a social safety net, help for the poor, assistance for the elderly, emotional support, child support, friends, and something to be a part of.

And the researchers hint that this is a good thing. But that cannot be further from the truth.

You don’t have to be a religious person to see the problems with government replacing religion, and by extension, community.

A major source of social problems is emotional isolation. So even if the government is better at providing services that religion once provided, their services are cold and impersonal. Yes, people need food and healthcare. But those are actually pretty easy to come by in free societies based on production and abundance.

The truly hard thing to come by is a sense of belonging. For some people, religion provides this inclusive community. A government can replace the superficial qualities, but it is no substitute for the deeper connections that religion provides.