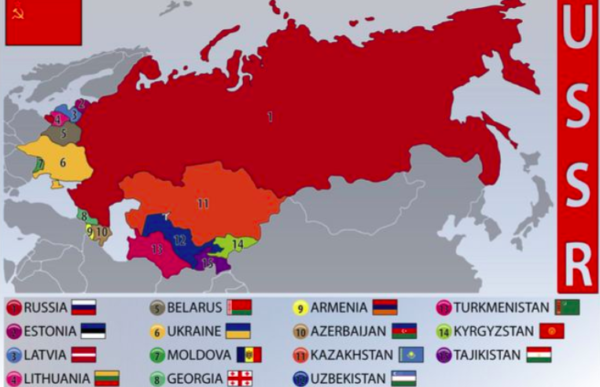 This show of both unity among the Baltic states and resistance to the Soviet Empire cemented their fate.

Gorbachev’s government privately concluded that the Baltics’ secession from the USSR was inevitable.

In 1990, the Baltics each officially declared their independence.

One year later, the Soviet Union officially recognized their independence and the last Russian troops withdrew in 1994.

This was the catalyst for the dissolution of the Soviet Union. Other former Soviet states followed suit and declared their independence.

Ironically, the classic Cold War villain, the USSR, gives one of the best contemporary examples of peaceful secession.

When the empire finally disbanded, it did so relatively peacefully.

And some of the best evidence of the benefits of secession come from countries that were once a part of the United Soviet Socialist Republic.

I often hold up Estonia as a prime example of government innovation, with their e-citizenship program, and talks of a cryptocurrency token to compliment it.

They’re already attracting enthusiasm despite the program being in “beta” stages.

And ironically, they would have even more freedom to innovate if they weren’t under the European Union. EU central bankers have condemned any attempts by Estonia to create a digital token.

Lithuania and Latvia have also seen massive economic gains in the decades since declaring independence from the Soviet Union.

And Estonia seems to be winning…

Their governing innovations have produced the largest economic boom of any former Soviet country.

The Estonians now have the rule of law, the lowest debt-to-GDP ratio in the EU, a balanced budget, free trade, and a flat-rate income tax — all of which have led to their high economic growth and prosperity. The Estonians now rank globally number 22 out of 152 countries on the Human Freedom Index, number 8 out of 186 economies on the Index of Economic Freedom…

To radically reduce corruption, the Estonians moved to e-government, whereby citizens could do most of their necessary business with government over the Internet, thus greatly reducing personal interaction between the assorted bad apples in government and the people — eliminating most bribery.

Estonia may be doing the best, but other former Soviet countries are rising to the competition.

Georgia too, has been able to rapidly grow its economy. And now, it is one of the friendliest countries to visit.

People from 90 countries can travel to Georgia and stay visa-free for up to a year. There they can work, study, invest, and employ, without any special requirements. Foreigners can even easily open bank accounts, in banks often much stabler than US banks.

Sovereignman explains how it happened:

Mikheil Saakashvili came to power in 2004. As Georgia’s President, he cut red tape, abolished import and export tariffs, fired half of the police force, invested in infrastructure and revamped the entire government.

With a little time, Saakashvili’s efforts paid off. Georgia’s staggering transformation was remarkable.

Today, Georgia is one of the safest and least corrupt countries in the world. It tops many “Ease of doing business” ratings, and Georgians are proud of it.

Programs like this only encourage other countries to adjust their policies to better compete.

It’s tempting to chalk these improvements up to the fact that the Soviet Union was so horrible–how could the countries not improve after seceding?

Yet Russia is still quite a large and centralized country. And many of the smaller former Soviet nations have vastly outpaced the economic growth of Russia in post-Soviet years.

It’s also tempting to suggest that this isn’t a true case of secession, as many Soviet countries had been independent before being annexed by the Soviet Union.

But the Baltic countries of Estonia, Latvia, and Lithuania had actually been under Russian control since 1721. Only for a brief 22 year period from 1918-1940 were they independent countries.

Of course, this was between World War I and World War II. European economies in that region had been devastated, and like Germany, strongmen dictators rose to power in the Baltics.

This was hardly a stable period that would have laid a foundation for ultimate secession from Russia.

Russia once again occupied the Baltics after a secret agreement with Germany. Then Germany invaded and ruled the Baltics from 1941-1944.

Just a recent historical example to consider, as the political divide seems to grow in the United States.

Few US states see such rabid political divisions within their own electorates.

Most of the clashes seem to stem from a large, centralized government, exerting control over a massive landmass, with a large population, and vastly different regional cultures and values.

So who’s ready to join hands, and form a human chain of resistance? 370 miles is the distance to beat.