In the coming months, more unprecedentedly rushed COVID-19 vaccines will likely be approved and subsequently introduced to market.

Whereas most vaccines take ten or more years to develop at a minimum – a necessary precaution to screen for adverse reactions in human test subjects who receive them — the COVID-19 vaccines currently in development across the globe will likely make it to market in less than a year from the starting line.

The monkey wrench in the pharmaceutical machinery, though, may prove to be widespread (and rightful) skepticism on the part of the public regarding the safety and/or efficacy of the eventual vaccine.

That people will be harmed by the COVID-19 vaccine once it is introduced to the public is inevitable. All vaccines, which re-jigger the immune system to produce antibodies against the targeted pathogen, can cause adverse reactions in a small percentage of the populations that receive them — even the safest, most thoroughly vetted ones.

This scientific, physiological reality is not disputed even by vaccine advocates. In fact, in the last 30 years, the U.S. government (using taxpayer money) has compensated victims of adverse reactions to vaccines to the tune of $4.4 billion. The COVID-19 vaccine will be no exception in terms of the damage it will inflict – in fact, because of the rushed nature of the vetting process and the proposed population-wide vaccination regimen, it will likely be far more destructive than previous vaccines in terms of scale.

Despite the serious health risks assumed by taking a vaccine pushed so rapidly through the vetting process, some Americans will undoubtedly roll up their sleeves. Others, though, will not; in fact, the number of Americans who hesitate to commit to taking the vaccine has been steadily rising since the novel coronavirus outbreak began.

In a recent Gallup poll on Americans’ willingness to submit to a COVID-19 vaccine, a mere half of the respondents said they would be willing to receive the vaccine once it becomes available.

This hesitancy on the part of the American public poses a potentially unforeseen dilemma for pharmaceutical firms and their cronies in government, which have spent billions developing these vaccines at breakneck speed: how best to prod, cajole, shame, or otherwise manipulate the American citizenry into accepting the vaccine once it has achieved FDA approval?

We can already see several strategies at work in this regard; the PR campaign to promote COVID-19 vaccination is now approaching climax.

Humans are hardwired to seek inclusion in social groups. In earlier epochs, our survival depended obviously and heavily on the social groups to which we belonged. Although the material reality of life has changed dramatically for humans since the dawn of civilization, those social imperatives carved deep into our innate psychology have remained.

Social engineers know and understand the basic desire for social inclusion, and use it as a tool.

Humans intuit the in-group/out-group dynamic. We are sensitive to lines drawn between insiders and outsiders and, whether consciously or subconsciously, modify our behavior to fit the mold of the inside group. If atomized outsiders can be convinced that the “insiders” in society get vaccinated, they are more likely to adopt conformative behavior as a result.

You can glimpse this strategy at play in public campaigns to promote vaccination. Consider the following graphic from Healthy Newborn Network: 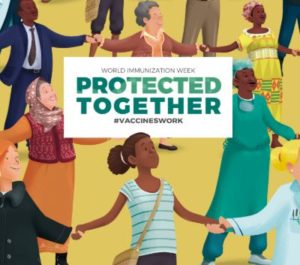 Part of belonging to a social group is the protection of — or at least the performative mimicry of protection of — vulnerable members of the group. We instinctively recognize and value this behavior in other members of the in-group, and in turn they are held in higher collective esteem. In this way, group members who exhibit concern for the welfare of others gain standing and secure their position in the group.

Again, the social engineers recognize this group dynamic and play on it to promote compliance with COVID-19 public health measures. Consider this PSA from the Texas Medical Association:

By obvious insinuation, if you don’t comply with public health measures such as vaccinations to contain the spread of COVID-19, then you do not love and care for the elderly and other vulnerable populations – and are thus ripe to be excised from the social group. In this way, in exercising your inborn right to make your own medical choices, you risk becoming a pariah.

When the vaccine is marked as a pitch to end the pandemic once and for all and save millions of lives, the screws will turn even tighter. The pressure to vaccinate will further intensify, and those who do not wish to comply will be forced to make hard decisions about how committed they are to exercising their rights.

At which point, we may arrive at another related tactic the social engineers are sure to use:  fear instillation – simple, yet effective. It goes something like “if you don’t get the vaccine, x millions of innocent lives will be lost.” You who refuse to vaccinate, in turn, would be responsible for those deaths. No one, save a psychopath, wants to be a murderer – or widely regarded by members of the in-group as one.

If emotional appeals fail, the social engineers will be forced to move onto physically alienating and ultimately excising the problematic out-group members from society.

The federal government, and its corporate partners, will set the agenda from on high, to be filtered down to smaller sectors of the economy and lower levels of government.

International and interstate flights – which are governed by the federal government — will require COVID-19 “immunity passports” from travelers to board flights. The military will require vaccinations for new recruits. The largest businesses with the closest ties to the federal government will likely be the first to make COVID-19 vaccination a standard prerequisite for employment.

In short, while vaccination at gunpoint will remain unconstitutional, the effort will be instead to make economic survival impossible for those who refuse to vaccinate themselves and their family. Apart from becoming a social pariah, being cut off from access to much-needed resources and institutions will make living “normal” life virtually impossible.

State and local governments will not be immune from these tactics; if local jurisdictions refuse to implement complementary regulatory regimes related to COVID-19, they will be coerced from on high (with threats of withholding federal funding, if need be) to comply.

This will mean that — jurisdiction by jurisdiction and measure by measure — the pressure to comply will compound. Unvaccinated children will be unable to attend public school. Public meetings will be closed off to unvaccinated community members. Sports and concert venues will be forced to require proof of vaccine to attend out of fear of legal liability. Access to public resources, at the local level as well as the federal level, will be cut off for the unvaccinated.

Thus, the psychological screws are tightened further. With no access to participation in the economy or society, how many American families will be able to resist, no matter how steadfast their opposition to an unproven COVID-19 might be?

As a society, we have arrived at a determinative crossroads for the future prospects of personal liberty:  one path leads to the maintenance of a quasi-free society where the individual retains some degree of medical autonomy, and the other leads to a dystopian new norm – the domination of public health decision-making by a small group of largely unelected and unaccountable social engineers.