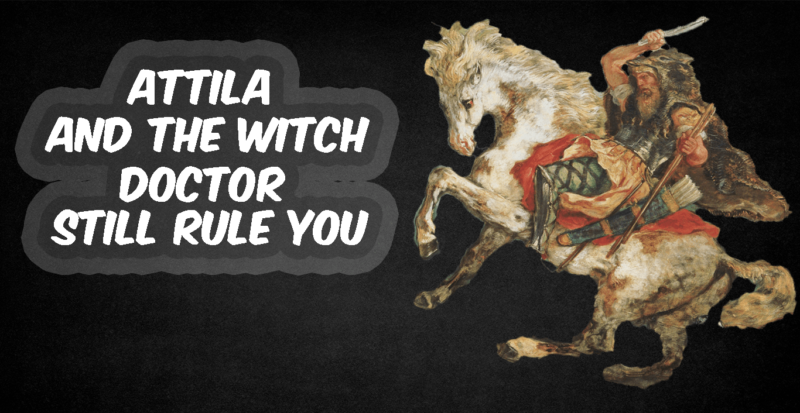 STAFF NEWS & ANALYSIS, Videos
How the Elite use Attila and the Witch Doctor to keep Power
By Joe Jarvis - October 22, 2020

It is not enough to control people’s bodies, their actions. The people in power must also control their minds.

And that is why strong men have always needed mystics.

Ayn Rand called this the partnership between Attila and the Witch Doctor.

And I think she offers a useful way of thinking about this particular power dynamic. You can see this paradigm being used by all the most powerful people, governments, and religions throughout history.

Attila controls the people physically, and the Witch Doctor controls them mentally, even spiritually.

In her book For the New Intellectual, Ayn Rand wrote:

Let’s discuss a few examples to better understand what Rand was talking about.

Feudal Lords and the Catholic Church: Feudal Lords extracted labor from the serfs which created all the food and material possessions needed to live– Attila. Catholicism made the serfs believe that their suffering was retribution for their sins, but that if they behaved they would be rewarded in the afterlife– the Witch Doctor.

New England Puritans: As a theocratic society, Attila and Witch Doctor were wrapped up in the same powerful people and institutions. People could be physically punished for any number of transgressions, but it was God making the rules. Man was simply delivering on God’s demands for a pure society.

During the Salem Witch Trials, people truly believed that the Devil was possessing their fellow villagers. So it was entirely justified to use physical punishment, even hanging, to keep people in line. Otherwise not only was the village at risk of becoming completely disordered, but they were all at risk of God’s punishment.

Big Brother and Newspeak: In George Orwell’s 1984, Big Brother is always watching. You behave because you don’t want to be punished for stepping out of line. But because of Newspeak, a language that has been so butchered as to render any critical thought fruitless, the people do not even have the means to intellectually disagree.

In reality, the previous week Oceania has been at war with Eurasia. However, Newspeak has rendered words like truth and deception meaningless. What big brother says is the truth, it becomes reality.

So you can try to reason in your mind that something is off. But you have been taught that War is Peace, Freedom is Slavery, and Ignorance is Strength. And so you don’t think about it, because you know finding any flaws in Big Brother’s reasoning is a thought crime.

Republicans and Democrats: Here’s one big way this applies to most of our lives today.

You could say the Republicans broadly represent the military and police state, and the Democrats are in line with the woke mob.

In other words, the Republicans are the Attilas who will physically punish you for victimless crimes like drugs, and illegal immigration. And the Democrats are the Witch Doctors who control the media, the Twitter mobs, and the Facebook/ Google/ Youtube censorship.

And as many commenters have pointed out, the politicians are not truly in charge.

So you could say politics in general is akin to the Witch Doctor, keeping people believing they need to submit to this government for safety and prosperity. Meanwhile the monetary system controls our physical reality.

Of course there is some mix and match here because the government’s police are Attila’s agents who you have physical contact with to keep you in line.

But, the neat black and white paradigm is just useful to extract and understand how the powerful operate, as opposed to everything being able to fit neatly into the two categories.

And you can even see this with a lot of powerful corporations. In real life, Nike uses sweatshops to make huge profits. But their branding has to take a stand– or I guess a knee– against injustice in America. It’s Attila doing whatever it takes in the real world to make a profit, and the Witch Doctor making sure there is a proper myth so customers believe in the company.

That is because they too are struggling for power, and suspicious of the other power faction. You see this often in current day rulers and elites behind the scene. As I’ve said before, the power game is largely elite versus elite, and the use the people they view as lesser as pawns.

And of course these are not strict, rigid archetypes. Rand only describes the two factions of power in this way in order to demonstrate how they operate. Like everything, these traits fall along a continuum.

But whether it’s Attila or the Witch Doctor that is any given elite’s dominant trait:

…secretly, each of them believes that the other possesses a mysterious faculty he lacks, that the other is the true master of reality, the true exponent of the power to deal with Existence. In terms, not of thought, but of chronic anxiety, it is the Witch Doctor who believes that brute force rules the world—and it is Attila who believes in the supernatural; his name for it is “fate” or “luck.”

And the reason Attila and the Witch Doctor are able to keep this power dynamic going is largely because most people fall along the continuum into their various camps, some assuming that the biggest muscles and armies are truly in control, and some believing in a higher power.

That higher power, again, is not always religion or spirituality. It could be the ideology of Communism, or the belief in the social contract, where people assign inherent obligations to everyone without their agreement.

But this power dynamic relies on a  third class: the people who actually produce the necessities of life– the food, shelter, innovation, technology, and advancement.

Against whom is this alliance [between Attila and the Witch Doctor] formed? Against those men whose existence and character both Attila and the Witch Doctor refuse to admit into their view of the universe: the men who produce. In any age or society, there are men who think and work, who discover how to deal with existence, how to produce the intellectual and the material values it requires.

These are the men whose effort is the only means of survival for the parasites of all varieties: the Attilas, the Witch Doctors and the human ballast. The ballast consists of those who go through life in a state of unfocused stupor, merely repeating the words and the motions they learned from others.

Or, in other words, the ballast are the useful idiots who lend the Attilas and the Witch Doctors their power.

And I’m assuming anyone that made it this far is one of those producers who the parasitic classes mooch off of.

You’re actually producing something, doing some piece of the work that the Attilas, Witch Doctors, Ballasts, and mooching classes of all varieties depend on.

And the question is, how to respond to this power dynamic. You can’t simply stop producing. That was the idea behind Rands “Atlas Shrugged.” A boycott from the actual producers of the world, who say they won’t produce any more for the cabal.

But that doesn’t really work if you don’t have a Galt’s Gulch to escape to.

The good news is, we each have the ability to create our own little Galt’s Gulch– a little piece of paradise where were keep the products of our labor, and throw off the yolk of the Attilas and the Witch Doctors.

For me, that meant moving to Puerto Rico to take advantage of great tax incentives.

But in my next video, we’ll get into the “traps” that keep most people supporting the Attila/ Witch Doctor system, when they could be striking it out on their own, and throwing off this control of the elite.