STAFF NEWS & ANALYSIS
How to Turn America into a Shit-hole Country in 4 Easy Steps
By Joe Jarvis - April 19, 2019

Opening up the floodgates of immigration to people from shit-hole countries would not actually be a problem if America was a free country.

If people were free to keep what they earn instead of having it redistributed, free to defend themselves and their loved ones wherever they went, free to become entrepreneurs without impossible protectionist regulations, America would absorb and assimilate any number of immigrants and refugees.

That’s what happened when Ireland, Italy, and Scotland were shit-hole countries where my ancestors emigrated from. The Irish were poor as dirt, fleeing a famine. The Italians brought the murderous Mafia.

And according to Thomas Sowell in his book Black Rednecks, White Liberals, the Scottish immigrants started the southern redneck culture, ready to fight and kill at the tiniest insult to defend their “honor.”

But a lot has changed since then. You can’t leave your home without breaking a law, so American policing agencies would have to spend a lot of time, energy, and tax dollars beating the ‘Merica into new immigrants.

But why blame the immigrants instead of the system?

Here’s how politicians are turning America into a shithole country.

1. Tax the citizens’ wealth away (or just steal it outright)

Elizabeth Warren has proposed a wealth tax as part of her campaign platform for President 2020.

This would tax the entire net worth of individuals worth over $50 million, every single year.

This eventually guarantees that no one worth over $50 million lives in the United States. At which point the tax will creep down to the middle class as it always does (especially if inflation makes millionaires of all of us).

And what exactly are you supposed to do if you own more than $50 million in non-liquid assets? Sell some to pay the tax (after you pay the tax on the capital gains)? Maybe break up a business to come up with the cash, or take a loan so you can afford to pay Uncle Sam without liquidating your holdings?

Doesn’t that sound really great for the economy?

Elizabeth Warren needs to read the old fable about the goose that laid the golden egg. When you cut it open and gut it, you find that there is no vast store of gold inside. The gold was being created by the live goose.

There’s always somewhere to go when the situation turns bad enough in your homeland. You can’t keep millionaires hostage…

Or maybe next year it will be Warren demanding money for a border wall to keep us in.

The socialists like to pretend the rich don’t do anything, but this is absurd. Unless you have a government contract or are otherwise funded by government force, you did something that someone found valuable to earn that money.

Then there is inflation which is just another secret tax on savings– the government prints money and gets to spend it.

And civil asset forfeiture shows that the police are not even pretending anymore. They straight up rob people without due process, without even charging them with a crime. They take their property, and assume their guilt unless they can somehow prove their innocence in the kangaroo court system.

That’s the opposite of the Western legal standard based on centuries of common law. Which leads me to my next point…

2. Destroy the Rule of Law

This could be considered the one easy step to turn America into a shit-hole county.

The rule of law is what allows people to create wealth. And I’m not just talking about random laws and government statute. True rule of law is about solving disputes, not creating criminals with victimless crimes.

Yet the rule of force, not rule of law, is what we have today.

Tom W. Bell, law professor and author of Your Next Government? says that 48% of all wealth on earth can be attributed to the rule of law.

It is the hidden commodity which greases the wheels of prosperity. Without being able to keep what you earn, and hold accountable those who steal from you, there is basically no incentive to produce. Why work so hard only to be robbed of all your efforts?

Other times the government is ineffective at stopping crime, or worse, prevents individuals from defending their own property and lives.

Meanwhile, they put people in chains for smoking plants, and running businesses.

3. Divide the Rich and Poor

Some countries throw racial divisions into the mix to add a little more spice.

But it always comes down to the haves and the have-nots. And it is the same with other divisions–like convincing women and gays that they don’t have the same rights that straight men have.

This is what preceded every genocide in history. The Kumar Rouge in Cambodia said that educated people were taking advantage of the working class, so they murdered people for as little as wearing glasses.

The Hutus and the Tutsis were never rival tribes. They are a made-up distinction coined by Belgian colonials. The Belgians called the taller people with longer necks and lighter skin Tutsis and gave them more political power. The shorter people with a stockier build were dubbed Hutus, and shaped into the working class.

The Belgians did this to maintain control by creating a hierarchy. What they caused was eventual genocides in both Rwanda and Burundi.

It is the same attitude of governments that turned Venezuela into a shit-hole country by demonizing business owners and wealth.

4. Make it Impossible to Make Money Without Government Approval

The government takes your right to conduct consentual economic activity with other adults, and sells it back to you with a license. 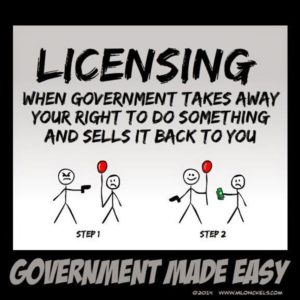 Often this is protectionism designed to throw roadblocks in the way of people joining the labor force. This keeps wages artificially high for people already established in the industry.

It doesn’t matter how expert you may be, you need to cough up the dough for official training if you want to play ball. One life coach from Florida was threatened with jail time if she didn’t forfeit her first amendment right to free speech, and stop giving diet advice.

In a free country, the government doesn’t get to put itself in between you and other consenting adults just trying to transact.

Which brings up an interesting point with illegal immigrants who often work below minimum wage, under the table, doing jobs which Americans don’t want.

The government helps keep black markets alive and viable with all it’s regulations, laws, and restrictions.

And thriving black markets, where people can’t simply do business in the open, is a hallmark of shithole countries.