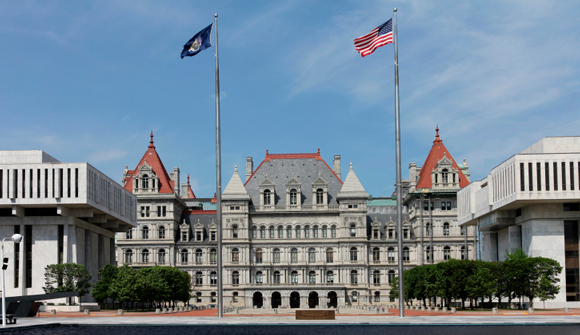 The Silver-Skelos 'defense': Corruption is the way of Albany … How do you defend the indefensible? If you're former state Senate Majority Leader Dean Skelos, you do the same as your Assembly counterpart, Sheldon Silver: You don't. Like Silver, Skelos opted not to testify on his own behalf — likely realizing the jury wouldn't believe a word. – NewYorkPost

Dominant Social Theme: If we can get the corruption out of government, it will work better.

Free-Market Analysis: The New York Post has recently published several articles blasting the corruption in New York state and using the trials of Dean Skelos and Sheldon Silver as examples of why the Albany political culture has to change.

Certainly, the arguments by Skelos don't add up. He basically argued, according to the Post, that he did nothing out of the ordinary, and that his actions were "business as usual" for Albany.

… This was the gist of the closing argument from Skelos' lawyer Wednesday: What the prosecution calls bribery, extortion and conspiracy was just business as usual.

… The payoffs-for-power pattern is plainly the Albany way. If he keeps this up, US Attorney Preet Bharara can look at opening a probe of the whole Legislature under the racketeering laws.

Last month, the Post reported on "good government" groups that were proposing anti-corruption laws in the wake of the trial of Sheldon Silver. Former Assembly Speaker Silver was convicted at the end of November in a $5 million public-corruption case that the Post called "a stunning fall from power that exposed Albany's sleazy culture of influence-peddling — and showed that it reached to the top."

And the Post quoted Citizens Union Executive Director Dick Dadey as saying, "For far too long state legislators in particular have used their public posts for private gain and have lined their pockets."

Dadey believes that the high-profile trials will provide impetus to pass laws that reform the Albany political process. The coalition calling for reform legislation includes Reinvent Albany, Common Cause and the League of Women Voters of New York State. The idea is to limit legislative income and to generally make the legislature more transparent and responsive.

The trouble with demanding anti-corruption laws is that they may work for a while but over time they will cease to be helpful. History shows us this. Western governance generally is unwieldy, and the bigger the government the more problems it has.

Over at Natural News we find a post that provides further insight into the problems of modern governance – as it affects the US in particular. It actually updates a Pew survey that we commented on some time ago. See here.

Entitled, "Fully 80 Percent of Americans have lost trust in the government …" the post clearly shows that suspicions regarding government remain at an all-time high.

In this case, it is the federal government rather than state government. But the issues are certainly the same. Good government groups believe that "reform" can regenerate confidence in government but the Pew survey shows us that such hopes may be misplaced.

Only one-in-five still think government can solve all their problems … According to the latest poll from the Pew Research Center – which was based on 6,000 interviews – close to 80 percent of Americans severely distrust the U.S. government.

… The Pew Research Center states that "Currently, just 19% say they can trust the government always or most of the time, among the lowest levels in the past half-century. Only 20% would describe government programs as being well-run. And elected officials are held in such low regard that 55% of the public says 'ordinary Americans' would do a better job of solving national problems."

The article suggests that part of the disillusionment of the average citizen is because "Life in America not what it used to be." And it points out that by most measures, lifestyles in the US are degrading.

There are some 15 million children living in poverty in the US, the article notes. Meanwhile, police violence has become a staple on the nightly news. "SWAT teams make their way down residential streets; uniformed individuals stand guard in areas that never required their ongoing presence; and people are running scared."

Changes to the healthcare system have also frustrated citizens, many of whom may face fines if they are unable to navigate – and afford – the new protocols of Obamacare.

The Pew survey clearly charts the unraveling of civility. When people feel personally harassed and helpless, they are likely to regard each other with suspicion, too. This is a trend that is not likely to subside. Societies tend to move forward not backward along predictable tracks. Reform may be tried but it is not usually a viable option in the long run because the system almost inevitably returns to its previous evolution. It seems, as we can see from the Pew survey, that "reforming" the system is not something many believe – with good reason – can be accomplished.

As we often point out, it is better to concentrate on one's personal lifestyle and prospects than to try to reform what is not re-formable. Lifestyle insurance, living abroad and cultivating a maximum amount of individual freedom is a personal solution to the expanding authoritarianism and corruption of the modern state. To a degree you can control your personal circumstances, and surely that is where most should choose to start.