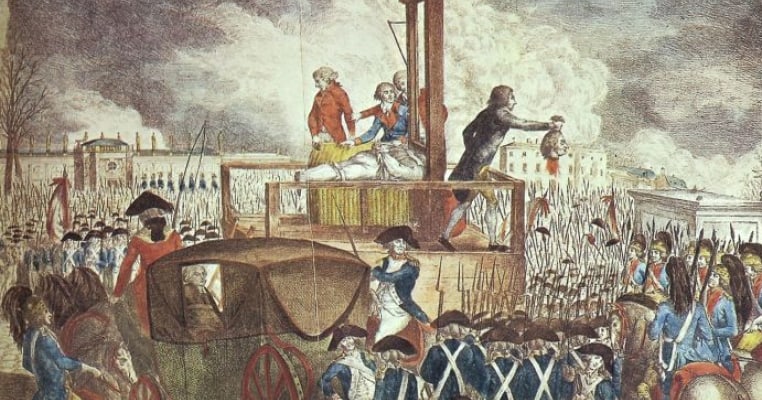 On October 6, 1789, a group of French peasants surrounded the country estate of King Louis XVI of France and demanded that he and his family relocate to Paris.

The people were sick and tired of the king living the luxurious palace lifestyle at their expense. And, fearing what might happen if he refused, Louis consented to their demand.

The French Revolution was already well underway at that point, sparked in large part by people’s disgust with their out-of-touch aristocracy.

France had been rendered bankrupt by the late 1700s; decades of costly foreign wars, coupled with endless extravagances by the nobility, had completely depleted the treasury.

The government’s solutions alternated between pretending their financial problems didn’t exist, to raising taxes at every possible turn.

The nobles hardly noticed. They lived lavishly while passing on the inflation and tax increases to the peasants.

French aristocrats were either completely clueless, or didn’t care one bit, that their policies were ruining people’s lives.

The Queen, Marie Antoinette, is rumored to have summed up this attitude when she said “Let them eat cake”, in response to hearing how countless peasants were starving.

Most likely that story is just urban legend. However there is plenty of historical evidence that she cared far more about her hair and royal gardens than any plight of the French people.

Her lavish spending was so famous, in fact, that the French used to refer to her as “Madam Déficit”.

And yet— the king, the queen, the nobles— they were the elites. They knew best, and they were in charge of making decisions for everyone else.

You know the rest of the story: the royal couple eventually paid for their conceit with their heads. But that didn’t solve France’s problems.

Soon a wave of radicals took over and formed a new elite (which became known as the Reign of Terror). And just like the old elite, they knew best, and they were in charge of making decisions for everyone else.

This new elite encouraged the population to rat each other out for petty crimes. They printed stupifying quantities of paper money and engineered hyperinflation across the country.

France’s revolutionary history is an incredible example of what happens when a tiny, out of touch group of elites manages to seize power and set the priorities for an entire nation.

We’re experiencing a version of this today in the West.

Prominent media personalities, politicians, tech companies, and self-absorbed social media celebrities, have appointed themselves our cultural nobility and seized the power to dictate just about everything, from how tax dollars are spent, to the words that we’re allowed to say, to how our children are to be educated.

It’s astonishing how quickly it happened, and how much has changed.

For example, it wasn’t that long ago that the entire purpose of the US military was to fight and win wars… and to be the most lethal fighting force in the history of the world.

But today our new elites have changed the priorities. So now instead of the latest weaponry and unit readiness, senior military leaders brag about maternity flight suits, or reducing physical fitness standards in order to be more inclusive.

Twenty years ago the military was about shock and awe. Today the priority has become diversity and inclusion.

Here’s another example: once upon a time, politicians at least paid lip service to fiscal responsibility.

In fact there were numerous government shutdowns and debt ceiling crises in the United States, i.e. political battles to prevent excessive spending, as recently as 2011, 2013, 2018, and 2019.

Today, the new elites have changed the priorities. They tell us that the debt doesn’t matter, and the government can spend as much as it wants.

And with every new massive spending bill, they’re emboldened to spend even more money. It’s been two weeks since the $1.9 trillion ‘Covid’ bill was passed, and they’re already planning a $3 trillion ‘infrastructure’ bill.

Basic fiscal responsibility is simply no longer a priority.

Then there’s education, which used to be about—you know—EDUCATION.

But now that the new elites have taken control, teachers have kids praying to Aztec gods of human sacrifice in order to expunge their whiteness.

Critical Race Theory abounds in schools to teach children they are either victims or oppressors. And the new elite tells us that grading students based on getting the right answer in math class is White supremacy.

Then there’s the media— a once-trusted source of news and information.

Today, under the new elites, the priority is no longer truth. It’s about force-feeding the narrative they want you to believe, whether about Covid, race, politics, climate change, or anything else.

For example, when a deranged lunatic went on a rampage and killed eight people last week in Atlanta, six of whom were Asian, the media immediately reported that the shooting was due to White supremacy.

Yet the FBI said there was no evidence to suggest a racial motivation, and even the killer himself stated that he was motivated by his sex addiction.

But the media kept pounding the White Supremacy story anyhow.

Yahoo News immediately told its audience in a reprinted article entitled “Whiteness is a Pandemic” that:

Whiteness is a public health crisis. It shortens life expectancies, it pollutes air, it constricts equilibrium, it devastates forests, it melts ice caps, it sparks (and funds) wars, it flattens dialects, it infests consciousnesses, and it kills people. . .

Naturally this is considered to be perfectly acceptable content, and not racist in any way.

In 18th century France, people were starving, but the elites who ruled them were so out of touch that the prevailing attitude was, let them eat cake!

Today there’s a new elite that makes all the rules. They’ve completely corrupted western civilization. They are fanatics who embrace Marxism, violence, racism, and censorship.

And like the French elites before them, they’re completely out of touch with how much they’re destroying the country and people’s lives. Let them eat woke!