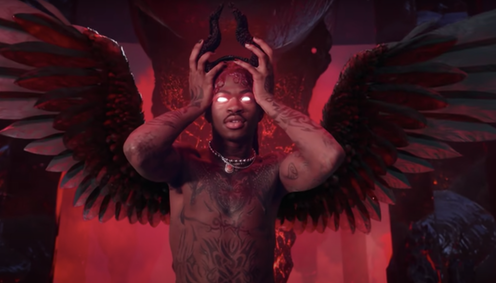 As Tyler Durden, one-half of Fight Club’s protagonist’s split personality, profoundly (albeit crassly) noted, “sticking feathers in your butt does not make you a chicken.”

In the same way, NIKE© shoe gimmicks (retailing for $1,018), Satan-themed music videos and gay make-out sessions at award shows don’t make one a cutting-edge artist – at least not in America, not in 2021.

Cultures are not static; they have trajectories.

It’s so non-edgy to be gender non-conforming in the modern era, in fact, that the only way to generate controversy (and, as a result, desperately needed publicity) for yourself is to continually up the ante.

The neoliberal press has laid the propaganda on thick (especially recently for “Pride Month”), so this bears repeating: being LGTBQ4GF150+++© or whatever doesn’t make anyone or anything special. Likewise, you are not a unique, special snowflake of special unique specialness just because you perform unimaginative, formulaic public displays of obscenity. 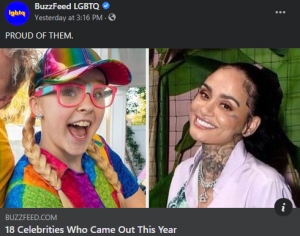 So, given his ho-hum mediocrity, why is the media obsessed with Lil Nas X? Because he discovered the formula, which is catnip to the neoliberal press: an ostensibly anti-Christian, anti-family homosexual racial minority who presses hard on all those woke culture war buttons and, more importantly, throttles the volume up to extreme proportions.

Indeed, Lil Nas X full-throatedly (no pun intended) endorses this lane he carved out for himself as a carefully PR-cultivated “threat” to a rapidly dying traditional culture: 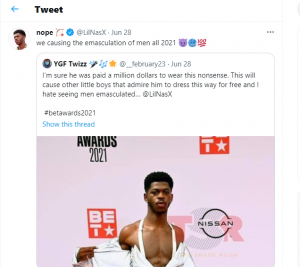 “We causing the emasculation of men all 2021” is, to the casual observer, an ostensibly subversive message. This type of rhetoric, again, is catnip to a corporate media obsessed with quixotically fighting “patriarchy” and “toxic masculinity” as causes célèbre of the third-wave feminist movement.

The perennial marketing question, however, is: After Satan shoe gimmicks and elaborate, effeminate costumes worn to award shows, how to up the ante? How best to generate some buzz, to give vapid Huffpo writers something fresh to write a last-minute click-bait article about up against a deadline?

For Lil Nas X, escalating displays of brazenness and exhibitionism is the only way to raise the bar and ensure your position in the next media cycle.

The essential challenge for Lil Nas X, in the absence of any remarkable talent, is that to maintain his position in the pop culture spotlight, he must continually up the ante to forever more extreme levels.

Eventually, inevitably, Lil Nas X will hit a brick wall as a sizeable enough proportion of pop culture media consumers realizes “there is no there there” – behind the controversial façade, there exists no deeper moral justification for the shtick. Or, even likelier, another vapid celebrity comes along with a greater capacity for generating mindless controversy who effectively sidelines Lil Nas X when he becomes too passe.

In short, controversy for controversy’s sake is unsustainable because it ultimately fails to satisfy the universal human craving for meaning. It’s a race to the bottom.

Unfortunately, though, the capacity to generate such controversy appears to be Lil Nas X’s only true gift. Turning to matters of substance, let’s take a deep dive into the actual content of Lil Nas X’s artwork. From his 2020 hit single Rodeo ft. esteemed lyricist Cardi B:

“I’ma take you from this party, we might go and have some sex
Or we do that later on, now we lit like cigarettes

I thought you would stay with me
I’m yours and you’re mine, I envy
So what I’m gon’ do?
I don’t have no clue, ain’t no me without you”

Get it? Lil Nas X and his casual sex partner at the party are lit, like cigarettes.

From another gem, Holiday:

“Ayy, it’s a holiday
I got hoes on hoes and they out of control, yeah
Ayy, it’s another way
All my n***** on go and I hope that you know it
I can’t even close my eyes
And I don’t know why, guess I don’t like surprises
I can’t even stay away from the game that I play
They gon’ know us today, yeah”

Lil Nas X’s hoes on holiday are so lit that they’re out of control.

You begin to glimpse the truth here: behind the curtain, nothing of interest is on offer. It’s all sex and Satan gimmickry, all the time – such is the totality of Lil Nas X’s appeal.

At the very least, though, credit where credit is due: in Holiday‘s second verse, Lil Nas X explicitly admits his art is shticky gimmick:

“Man, I snuck into the game, came in on a horse

I pulled a gimmick, I admit it, I got no remorse

Nobody tried to let me in, nobody opened doors”

In all fairness, respect must be given on that account alone. Imagine if every vapid pop culture icon, telemarketer or clickbait internet ad was as forthcoming, as transparent in their fraudulence as Lil Nas X; the world might make a little more sense.

Ben Bartee is a Bangkok-based American journalist with opposable thumbs. Contact him via his blog, Armageddon Prose. Support his independent True North journalism via Patreon or PayPal.