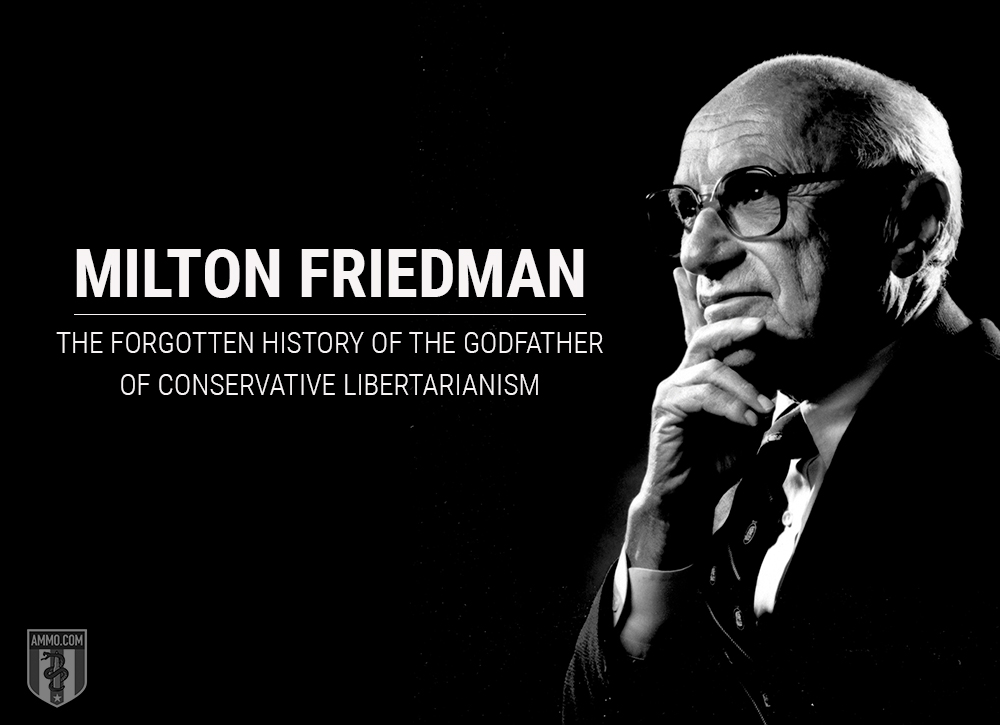 “I would like to say to Milton and Anna [co-author of A Monetary History of the United States, 1867–1960]: Regarding the Great Depression. You’re right, we did it. We’re very sorry. But thanks to you, we won’t do it again.”

Milton Friedman is the Godfather of American conservative libertarianism. He was, at a time when it was deeply unfashionable in official circles, a fierce critic of Keynesian economics. He was a leader of the second generation of libertarian economists to come out of the University of Chicago. Among the people recruited or mentored by him at the university include Thomas Sowell, Gary Becker, Robert Fogel and Robert Lucas, Jr. Friedman often used the jargon and methodology of Keynesians while rejecting their basic premises, coming to very different conclusions than his Keynesian counterparts.

One of his groundbreaking theoretical innovations is the notion of a natural rate of unemployment. Friedman believed that when the unemployment rate was too low, inflation was the result. Using this and his unique interpretation of the Phillips Curve, Friedman predicted “stagflation” long before there was even a word for such things. Friedman likewise broke with Austrian orthodoxy in advocating for small, controlled expansions of the money supply as the proper monetary policy. This became known as “monetarism” – the theory leveraged by the Federal Reserve during the 2008 financial crisis.

As an advisor to both United States President Ronald Reagan and United Kingdom Prime Minister Margaret Thatcher, it can be said that, in some ways, Milton Friedman was the forerunner of neoliberal economics on the international scale.

Friedman came from humble beginnings, the son of two Jewish immigrants from an area of the Kingdom of Hungary currently located in Ukraine. His family soon moved to New Jersey. And at 16, he won a scholarship to Rutgers University, where he studied mathematics and economics with an eye toward becoming an actuary. He was offered two different scholarships: One to Brown University to study math, the other to the University of Chicago to study economics. He opted for the latter. It is here that he met his future wife, Rose Director, also an economist.

He was unable to find work in academia, so he and his wife moved to Washington, D.C., to work as economists for President Franklin Delano Roosevelt. He actually believed in many of the programs designed toward job creation and infrastructure development (such as the Works Progress Administration, the Civilian Conservation Corps and the Public Works Administration) while opposing those programs which regulated and controlled wages and prices. Indeed, an opposition to wage and price control can be considered the central core of Friedman’s opposition to government intervention.

Later on, Friedman declared that he believed all government intervention to end the New Deal was wrong, not on the basis of moral reasons, but because it simply did not lead to the recovery the nation needed. He called it “the wrong cure for the wrong disease.” Later, in A Monetary History of the United States, 1867–1960, a book he co-authored with Anna Schwartz, he argued that the Depression was caused by a severe constriction of the money supply and unwise policy on the part of the Federal Reserve. In fact, subsequent Fed Chairman Ben Bernanke agreed with Friedman, saying in 2002: “I would like to say to Milton and Anna: Regarding the Great Depression. You’re right, we did it. We’re very sorry. But thanks to you, we won’t do it again.”

In 1940, Friedman finally got the academic position that had eluded him for so long. The University of Wisconsin-Madison hired him as an assistant professor of economics. However, he left either due to antisemitism or competing ideas about the coming war, and re-entered government service. He worked for the United States Department of the Treasury, where he was responsible for, among other things, the income tax withholding scheme that has you paying your income tax as you go rather than writing one big check per year.

He supported the United States war effort during World War II as a mathematical weapons statistician. When the war was over, he received his doctorate from Columbia University. He then accepted his position at the University of Chicago, a position he would keep for the next 30 years. He was the intellectual godfather of a group of economics academics and intellectuals known as the Chicago School, many of whom would receive Nobel Prizes over the years.

Capitalism and Freedom is the book that eventually brought him popular acclaim. Published by the University of Chicago in 1962, it has sold over half a million copies and has been translated into 18 different languages, no small feat for a popular book on the subject of economics. In the book, he argues for a classically liberal society where free markets solve problems of efficiency, using the United States as an example. He argues for free markets on the basis of both pragmatism and philosophy. He concludes the book with an argument that most of America’s successes are due to the free market and private enterprise, while most of its greatest failures are due to government intervention.

The book was a touchstone for the conservative movement in the United States. He supported the campaign of Senator Barry Goldwater in 1964, and was later an advisor to President Ronald Reagan, whose own political career was inspired by Goldwater. He received the Presidential Medal of Freedom and the Medal of Science from Ronald Reagan as he was preparing to leave office in 1988. Friedman claimed that he was a libertarian with a small “l” but a Republican out of expediency. He labeled his own views “classical liberalism,” while at the same time declaring that it didn’t matter what people called him.

Friedman believed that Social Security benefits were the genesis of the welfare state and dependency on government handouts. He advocated the replacement of all welfare programs in America with a negative income tax (effectively a universal basic income) because he did not believe that society would distribute resources evenly enough for all people to earn a living.

Friedman was an idiosyncratic figure who would be hard to pigeonhole in the current political spectrum. He inspired the conservative movement, but was against any discrimination against gay people, in addition to being an agnostic. He was a libertarian who advocated for a progressive income tax system that even went into the negative to ensure that everyone could, at the very least, meet their basic needs.

Perhaps that is what makes him such a hero. Rather than resorting to rote ideological responses to the issues of his life, Friedman instead chose to think about them flexibly and novelly. This is a precedent set during his acceptance of some Great Depression relief programs (but not others), which followed him throughout his life. We should all be so creative in our thoughts.

Milton Friedman: The Forgotten History of the Godfather of Conservative Libertarianism originally appeared in The Resistance Library at Ammo.com.