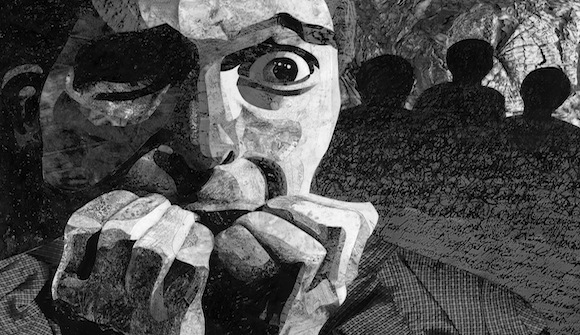 A short history of North America's financial panics … President Andrew Jackson rode a wave of hostility toward financiers into the White House. He declared America's national bank corrupt, and set out to thwart its activities. Private banks responded with rapid expansion, fuelling a real estate bubble. Jackson, who had paid off the national debt, insisted that public lands be paid for in gold or silver coin, causing a currency reserve crisis. Once again, banks foreclosed on mortgages, a crisis of trust triggered a massive business contraction, and in New York, 250 business houses declared bankruptcy in the first three weeks of April. Historians later described circumstances in which even the central government couldn't pay its debts and "trade stood still, business confidence vanished, and ruin stalked unchecked over the land." Jackson departed, leaving the problem to incoming President Martin Van Buren. – Vancouver Sun

Dominant Social Theme: Panics have little to do with money products.

Free-Market Analysis: This is a really terrible summary of monetary panics in the United States. You could read the entire article and not come away with an accurate sense of what actually went on.

Take the description above. The national bank set up by Nicholas Biddle was in line with what apparent Rothschild agent Alexander Hamilton wanted for the United States, a European-style Royalist financing culture.

That's what the US has today. Hamilton won the battle; we'll see if he wins the war. But articles like this, which set up themes that treat economic episodes as serial and unconnected, are doing an accurate historical narrative a disservice.

San Francisco, still the source of much of the world's gold supply (including shipments from B.C., Yukon and Alaska), was flattened by a massive earthquake in 1906, causing a sudden, unexpected restriction in gold supplies that created a liquidity crisis. Already spooked by earlier financial mismanagement during the so-called Gilded Age of robber baron financiers, depositors began a run on banks that caused two major brokerage houses to crash. But it was one of the financiers who saved the day. J.P. Morgan came out of retirement to organize a rescue plan for stricken financial institutions. One of his measures was the creation of the U.S. Federal Reserve.

The U.S. economy had been surfing an unprecedented boom in technology, industrial growth and consumer spending driven by a new banking instrument — purchases on the "instalment plan" by which households got the new car or radio now but paid for it incrementally over months or years. Some thought the prosperity would never end. But greed and speculation were growing, too — 40 per cent of bank loans were used to buy stocks that seemed destined to endlessly rise in value. Over the last hour of trading on Oct. 23, prices on the New York Stock Exchange nosedived. The next day, the market fell again. Brokers took a breather over the weekend, but on Black Monday, it dropped again, and fell yet further the next day. There was a run on gold reserves and 4,000 banks and financial institutions failed. Scholars argue over whether the Crash of '29 caused the Great Depression that brought such misery to the world for a decade, or whether it was merely a symptom. In the popular imagination, the two became synonymous.

Deregulation and low interest rates enabled banks and other financial institutions to market affordable mortgages to consumers who might not have qualified under earlier rules. People bought homes at subprime interest rates, speculating that they would rise in value. Sellers bundled these debts with better-secured loans into packages for re-sale to other institutions. But when interest rates rose again, the subprime housing bubble burst and housing prices began to fall. In many cases, people discovered their houses were worth less than their mortgages and chose to default, creating a liquidity crisis for the banks. Institutions that held the toxic debt secured with over-valued assets now in a price free fall were forced to write off billions. Investors had a confidence crisis and dumped stock in already under-capitalized financial institutions, which then began to fail. Failing banks sold themselves to bigger banks to avoid bankruptcy, once abundant credit tightened sharply, and despite the biggest bailouts in financial history by governments, the world slid into a recession from which it has yet to fully recover.

We've focused on the past three panics in the US, though the article makes mention of more. But notice how unfocused and generalized the descriptions are.

Fed bankers almost immediately began printing more money than they were supposed to after the formation of the Federal Reserve. This created the Roaring '20s and then the Great Crash. President Franklin Roosevelt promptly declared a bank holiday so people wouldn't cash in their Fed notes and notice that there wasn't enough gold to cover them.

And what about the Panic of 2008? The description mentions that interest rates were too low but doesn't attribute the policy directly to the central bank. When one examines the reality of panics and crashes, one always comes back to the role of central banks in first creating and then aggravating seemingly systemic dysfunctions.

Of course, what is blamed is "market failure." Nothing could be further from the truth. The kindest explanation for what goes on is that central bankers attempt to create prosperity and instead, foment disaster. But one can certainly be pardoned for speculating that such serial disasters must inevitably be the result of some kind of secretive policy, given their repetition and destructiveness.

But even if one does not want to attribute recent monetary disasters to malevolence, the descriptions related in this article are certainly so general as to verge as untruthful. This is, in fact, the way economic history is usually related, in generalities that do not take into account the hard facts of central banking manipulations.

In the 20th century, it was easier to propound this sort of narrative. But one wonders how long it will continue to be convincing in the 21st.