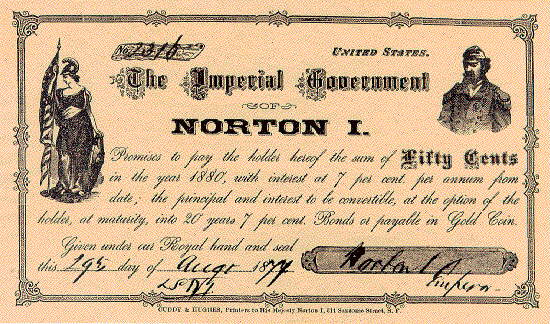 Back in the nineteenth century, there were a number of communities that sprung up in New England as little utopias. One of the cool ones was called Modern Times. It was started on Long Island as a socialist experiment. It’s still there, but now it’s called Brentwood.

The most interesting thing about the town was the experiment the community tried with Time Notes. Everyone issued their own currency. Thus, no one was broke if they could trade a future product or service represented by a promissory note. The notes were denominated in hours of labor. You can probably guess what happened—some people’s notes were considered worthless. If you were a doctor, you wouldn’t want to trade your time at par with someone who picked up sticks, especially the worse stick picker upper.

Still, it’s not a bad idea as long as the theory that “everyone’s labor is equal to everyone else’s” isn’t imposed (like one of my high school teachers insisted). Yes, it IS harder to shovel coal than it is to be an ETH developer, at least physically– but more people can do it.

Now that we’ve had lots of time to learn about cryptocurrencies, I want to re-visit what they are.

The IRS has decided they aren’t currency, which is at odds with much of the international community that recognizes that they are a currency, first and foremost. Are they also a commodity, like the IRS says? They are that too. Sometimes, cryptocurrency is a security token—evidence of equity ownership in a business. Other times, a utility token is tradeable for a pint of stout, a digital game, or $1.

A utility token could be backed by something as silly as the Venezuelan government, or it could be backed by real property. They can represent a claim on future production or profits; they can be held, speculated with, traded for national fiat currency, or whatever.

Alt currencies are always going to be all over the place in terms of value. Once upon a time, you might recall, someone came up with the concept of eGold. Great idea, for 1996, but look here at its full history and problems.

For its age, eGold prefigured Bitcoin in many ways, and its owners were an easy target. Their assets were seized under the forfeiture laws, and eGold was declared a money transmittal business, just as Bitcoin has been in some states. Owners were characterized as criminals and terrorists, and of course Russian hackers are in there somewhere. Although Bitcoin shares with eGold the problem of psuedoanonymity, ownership is now spread throughout the world—and things are getting better!

What if everyone could issue their own currency? Well, now you can!

With Waves, you can name and create your own tokens in minutes, and trade them instantly in the privacy of your own bunker. Waves is a particular type of cryptocurrency, and also a platform. Using the Waves desktop app, you can create your own token, and trade it for other tokens, such as Bitcoin, Ethereum, etc. and it only takes seconds. Waves was designed for this purpose.

Now there is another cryptocurrency that uses one of the Bitcoin forks, SLP, promoted recently by Roger Ver. SLP stands for Simple Ledger Protocol, and it has a cool feature that lets you create dividends for your tokens. See SLP here. You can also download a free desktop exchange for SLP, just like Waves.

More exchanges like https://shapeshift.io will spring up, to create an instant secondary market. There will be an explosion in the number of businesses catering to international consumers, who will become businesses in their own right. Finally, the problem of capitalizing new amazing projects might just be solved in 2019.

I believe that the asset securitization business, with its trillions of euros currently invested, is ripe for tokenization. I’ve been developing a plan to fractionalize mortgages internationally. Next, you’ll see the tokenization of everything from car leases to aircraft purchases.

All of these products will lead us to the future of money, allowing micro and macro investing around the world, with your cell phone. What will happen to national currencies? Why, I expect they’ll go the way of the stone currency of the Isle of Yap, the Venezuelan Bolivar, and the Zimbabwe Zim.

“I am more convinced than ever that if we ever again are going to have a decent money, it will not come from government: it will be issued by private enterprise…” -F.A. Hayek

Bonus!: the graphic on this article is of a Note signed by Norton I, Emperor of the United States and Protector of Mexico, a famous eccentric. The 50 cent notes are now worth over USD $20,000, if you can find one.