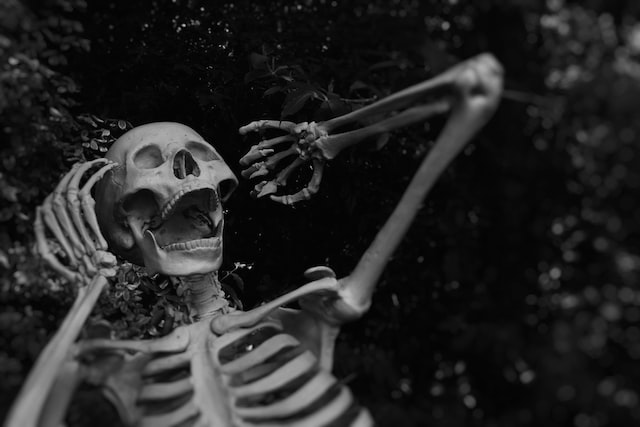 Aside from, perhaps, Christmas and Columbus Day, Social Justice© leftists love wrecking no holiday more than Halloween. Because it’s primarily about fun — the left’s sworn nemesis.

Accordingly, each year, the left wages war on Halloween.

Likely at the insistence of some new school administrator fresh out of a graduate program in women’s studies or whatever, “Lower Merion School District cancels Halloween parades over safety, inclusivity concerns,” sacrificing a 50-year tradition at the altar of Social Justice©.

Because Social Justice© activists are lazy, they no longer even bother elaborating how whatever weird social engineering project at hand actually fosters “safety” or “inclusivity,” or what those terms even mean in the given context. It’s understood implicitly that dissent = bigotry. Why push back when criticism will be received as irrefutable evidence of their white supremacy?

Halloween stuff in Lower Merion School District is now replaced with some vague, sterilized abomination called “fall-themed activities,” which are sure to suck the souls out of the schoolchildren.

“Fall-themed activities,” and the vapid postmodern dystopia that term represents, are how school shooters get made.

Fascinatingly, the Lower Merion Library System (LMLS) has issued no such ban to Drag Queen Story Hour, which it welcomes preschool-age children to attend:

“Bringing a drag queen into libraries and schools as a children’s storyteller brings LGBTQ (and all) youth an experience they would not normally be able to access until their adulthood.”

Katrina Green, a teacher at Chickpeas Preschool, can’t get enough of the program for her preschool-age children:

“Drag Queen Story Hour allows preschool children to deepen and complicate their ideas about gender at the exact age when they are often developing rigid ideas about this concept. The program is fun, interactive, family-friendly, and conveys important messages about gender and diversity in a way that is light and accessible to all.”

Registered sex offenders have verifiably slipped past the dragnet to access children via Drag Queen Story Hour, but apparently that’s not a significant enough “safety” issue to warrant a district-wide ban. It’s certainly, though, inclusive of pedophiles (otherwise known in Social Justice© jargon as “minor-attracted persons“).

Maybe the school district will welcome drag queens for its “fall-themed activities” to further demoralize and confuse the children in its custody.

The school district can take its cue from San Diego, California, which has taken the lead on queer-ifying Halloween celebrations. Kids in their public schools can’t get a single day to themselves free of drag queens:

“A San Diego-area parent accused her local school board of being ‘groomers and activist pimps’ after it invited the community to a ‘queer’ Halloween party featuring a ‘family friendly’ drag queen show.”

A favorite pastime among anti-Halloween social activists this time of year is costume-policing. They get off on the capacity to control what other people wear by appealing to “tolerance” and other Social Justice© red herrings. It’s a new flavor of authoritarianism that employs shaming and groupthink as the methods of control.

Every year, the self-appointed Social Justice© ministers of the corporate state release a list of verboten costumes that, in one way or another, violate orthodoxy.

This year, Buzzfeed has issued a fatwa against Jeffrey Dahmer costumes in its public service denouncement: “Planning On Dressing Up As Jeffrey Dahmer For Halloween This Year? Don’t“:

“eBay has banned the sale of costumes inspired by the serial killer Jeffrey Dahmer in the run-up to Halloween for violating its policy.. Dahmer killed 17 people, predominantly Black men and boys… The company policy states that sellers are banned from listing items that ‘promote or glorify violence’ or are associated with violent individuals, the acts for which they gained notoriety, or crime scenes from the past 100 years.”

At a minimum, half of all Halloween costumes could be construed as “glorifying violence.” That’s how Halloween works – it’s about exorcising terror, and depravity, and everything unholy (in the Christian adaption, before All Saints Day).

In all reality, Jeffrey Dahmer costumes would’ve garnered much less scrutiny if not for two crucial features of his victims: homosexuality and racial diversity. Via Out Magazine:

“Dressing as this real-life killer who tortured and murdered 17 men and boys (many of whom are Black and gay) is… actually a pretty awful idea.”

The whataboutism does get tiresome. But as a matter for the record, we all know that a costume of a serial killer who killed and ate white people would enjoy fairer treatment among the activist community.

If the standard is just “no serial killer costumes for Halloween,” let us consider that Obama launched ten times more drone strikes than his predecessor in his War of Terror – which killed, drumroll…. almost exclusively poor black and brown people in Africa and the Middle East – just like Dahmer!

Admittedly, this isn’t a totally fair apples-to-apples comparison because Obama piled up exponentially more bodies than your run-of-the-mill serial killer could have dreamed of.

For some reason, though, despite killing way more black and brown people than all the serial killers in US history combined, Obama masks are still available for purchase on eBay. 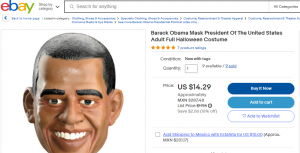 Halloween, like any holiday, isn’t complete until it’s somehow, no matter how tangentially, linked to transgenderism or some other such pet social engineering project of our overlords.

So they turned Scooby-Doo’s Velma character queer for Halloween.