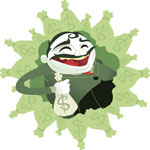 Three-month slide could hit record lows, Royal Bank of Scotland chief credit strategist Bob Janjuah predicts. Britain's Uber-bear is growling again. After predicting a torrid "relief rally" over the early summer, Bob Janjuah at Royal Bank of Scotland is advising clients to take profits in global equity and commodity markets and prepare for another storm as winter nears. "We are now in the middle of a parabolic spike up," he said in his latest confidential note to clients. "I expect this risk rally to continue into – and maybe through – a large part of August. What happens after that? The next ugly leg of the bear market begins as we get into the July through September 'tipping zone', driven by the failure of the data to validate the V (shaped recovery) that is now fully priced into markets." The key indicators to watch are business spending on equipment (Capex), incomes, jobs, and profits. Only a "surge higher" in these gauges can justify current asset prices. Results that are merely "less bad" will not suffice. He expects global stock markets to test their March lows, and probably worse. The slide could last three months. "A move to new lows is highly likely," he said. – Telegraph

Free-Market Analysis: We have stated the presence of green shoots is exaggerated. In fact, we have been surprised by the aggressive rise in stock prices around the world, but ultimately this is understandable given the amount of paper and electronic monetary issuance courtesy of central banks. Some of that money finds its way somewhere, and much of it seems to have found its way into stocks.

But as we pointed our previously, this may not be evidence that the recession is over so much as an illustration of how equity markets these days are divorced from the real economy, in the short term anyway. More and more, equity indices especially seem driven by monetary phenomena rather than real-economy events. In the article above, we seem to have found someone who agrees with us, an uber-bear to be sure, but we enjoy the company. Here's a little more from the article excerpted above:

While media headlines have played up the short-term bounce of corporate earnings, Mr Janjuah said this is a statistical illusion. Profits were in reality down 20% in the second quarter from the year before. They cannot rise much as the West slowly purges debt and adjusts to record over-capacity. "Investors are again being sucked back into the game where 'markets make opinions', where 'excess liquidity' is the driving investment rationale. "The last two Augusts proved to be pivotal turning points: August 2007 being the proverbial 'head-fake' when everyone wanted to believe that policy-makers had seen off the credit disaster at the pass, and August 2008 being the calm before the utter collapse of Sept/Oct/Nov… 3rd time lucky anyone?" … Over at Morgan Stanley, equity guru Teun Draaisma thinks we are through the worst. "We were on course for a Great Depression in February, but Armageddon was avoided. Governments did not repeat the policy errors of the 1930s."

Hm-mm – "Governments did not repeat the policy errors of the 1930s." Gee, we think Western governments may have made it worse. At least in the 1930s, to begin with, governments did not seek to rapidly re-inflate the bubble. Instead, markets and the economy itself were allowed to fall to a natural bottom. This purged mal-investment and made recovery a possibility. In fact, there were some recoveries around the world. In America, the recovery was retarded by the election and subsequent activism of Franklin Delano Roosevelt. The result was that America suffered from a decade-long downturn instead of a one or two-year episode.

This sort of history is unfolding again? We saw it during Japan's lost decade in the late-20th century, when Japanese leaders were determined that banks would not fail and the quasi-socialist grip on the economy would not be loosed. This firm resolve ensured that the economy did not purge mal-investment and as a result there was no real recovery. When mal-investment is not purged, then new investment tends to find its way into the failing environments. The new investment is wasted and the failing companies do not get any healthier. Eventually, they will diminish or fail entirely anyway.

This is what is taking place now throughout the West. The monetary elite can shove the stock market upwards and the mainstream press can write articles about the recovery, but the real economy itself is beyond such suasion. The real economy is not subject to propaganda or blandishments. Economic rules are a part of natural law and you cannot gainsay them. It is not very likely therefore, that real recovery is on its way. The mal-investment has not been purged and potentially detrimental overhangs remain – chiefly in the areas of commercial real estate and derivatives. But leaving aside defaults, the economy itself is simply not in great shape. Don't take our word for it. Here's a summary from a recent AP article:

The number of newly laid-off workers filing claims for unemployment benefits rose unexpectedly last week and retail sales disappointed in July. The latest government reports reinforced concerns about how quickly consumers will be able to contribute to a broad economic recovery in the U.S. "There is really no positive spin to put on these numbers," Jennifer Lee, an economist with BMO Capital Markets, wrote in a research note. "The U.S. consumer remains very weak. The jobs situation, while slowly improving, is still dismal." The Labor Department says initial claims increased to a seasonally adjusted 558,000, from 554,000 the previous week. Analysts expected new claims to drop to 545,000, according to Thomson Reuters. The number of people remaining on the benefit rolls, meanwhile, fell to 6.2 million from 6.34 million the previous week. Analysts had expected a smaller decline. The continuing claims data lags initial claims by one week. The four-week average of initial claims, which smooths out fluctuations, rose by 8,500 to 565,000. That reverses six straight weeks of decline. Meanwhile, the Commerce Department said retail sales fell 0.1 percent last month. Economists had expected a gain of 0.7 percent.

We write about dominant social themes in the Daily Bell and one that is obviously coming into play is the "economy getting better" meme. By using monetary policy to elevate stock markets and using the mainstream media as an echo chamber, it seems obvious to us that the monetary elite is trying hard to ensure that people don't start to lose faith in the system as it is. We've written about this before – that if a specific system or theme loses hearts and minds then over the long-term it is impossible to prop it up. If people lose faith in a fiat-money/central banking system, then the monetary elite will have suffered a big blow. They will do almost anything in our humble opinion to avoid such a fate.

Green shoots? You print a trillion dollars and see if it doesn't have an effect on stocks. It probably does. But stuffing a turkey of an economy with all the financial breadcrumbs in the world won't create a recovery. It is only human action that can do that. And that's why recoveries tend to start at the bottom, with individuals who utilize available capital to come up with items that are necessary and worthwhile in the larger scheme of things. Printing paper dollars and demanding that banks loan those dollars is an entirely inefficient way of commanding a recovery. Stop the bailouts and the money printing. Let Western economies work out mal-investment. And while you're at it, allow a gold and silver market-based standard to take hold. Honest money circulating in an honest economy will allow all to thrive, eventually anyway.