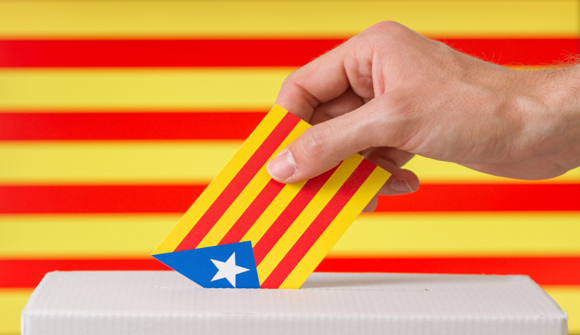 Catalonia's Vote Was a Success. Now Negotiate … Catalonia's independence vote on Sunday was encouraging – not in creating momentum for the region that wants to break off from Spain, but in laying a foundation for political agreement on how best to decide the question. Perhaps for the first time, the national government in Madrid made the smart choice, allowing the nonbinding "consultation" to go forward without interference from the police. In that same spirit, Prime Minister Mariano Rajoy should now arrange for a proper referendum and a free and full debate. – Bloomberg editorial

Dominant Social Theme: What a tragedy it would be if Catalonia were to secede from Spain.

Free-Market Analysis: Bloomberg's "editors" have concluded – predictably – that Catalonia ought not to secede.

In fact, this worldwide news agency never met a secession movement it couldn't criticize or a further agglomeration of nation-states that it couldn't find some reason to support.

The idea for Bloomberg and his clique of complaisant editors is that the world ought to merge, and having merged ought to merge again. Here's more from the article:

Sunday's vote result suggests that Catalans are open to hearing both sides of the argument. Yes, 81 percent voted for independence, but this was hardly decisive, given that turnout was at most 33 percent. That's far short of recent elections and a pale shadow of what one would expect in a properly organized and fought independence vote. (Eighty-five percent of eligible Scots turned out for their recent independence referendum.)

Popular views are better reflected by the regular opinion polls suggesting that about 50 percent of Catalans would vote for independence in a true referendum. And the more important poll number is the 80 percent who say they just want the right to vote: Rising anger at the Spanish government's intransigence has contributed to pro-independence sentiment. The first step to persuading Catalans to stay in Spain would be to map out a legal, constitutional route to giving them their say.

Catalonia's proposed secession would be even more fraught with risk than was Scotland's. It would carve away about 20 percent of Spain's economy, compared with 8 percent for the U.K. Investors in Catalonia's bonds certainly believe independence would be at least as bad for the region as for the rest of Spain. So in a real campaign, in which voters are confronted with the realities of assuming up to 200 billion euros ($250 billion) of Spanish debt, the case for unity should be winnable.

Unless Rajoy opens the door to compromise, however, opinions in Catalonia and Madrid will continue to harden. Then, rather than a healthy, constructive debate, Spain will face escalating confrontation.

The above excerpt reveals arguments that will be used to counter secession. First, Catalonia, responsible for 20 percent of Spain's economy, would have a great deal of difficulty surviving on its own. Second, it is pointed out that Catalonia would have to accept something like US$250 billion of outstanding Spanish debt.

The article does make some good points. Chief among them is the idea that a debate is preferable to a hostile standoff and that "negotiations" are preferable to determined silence.

But we don't agree with the general thrust. To be frank, we're all for secession in whatever form it is comes. Smaller is better than bigger and little is preferable to large.

The most basic unit of secession is the individual. We are all "nation-states" one way or another and the closer we can come to claiming our own unique, personal heritages the better off we will be.

This is the "anarchical" idea, of course. People can gather together voluntarily in larger groups and even sprawling communities. But the operative term here is "voluntarily."

The trouble with modern regulatory democracy is that secession is not especially voluntary. Those who wanted Scotland to secede haven't gone away just because a vote has been held. The same goes for Catalonian individuals making up an ancient culture that is opposed to the ruling Castilian caste.

In fact, in the current environment, we'd argue that "votes" will do little to ameliorate fundamental issues causing the agitation to begin with. One is basically applying a political solution to a cultural and economic conundrum. Where are the secessionists to go if they are frustrated in their aspirations?

A prediction? We'd tend to believe these secession movements will continue to gain momentum. And more grimly, if they are not recognized, they could end up fomenting considerable social chaos of the sort that is now taking place in Mexico (we wrote about this yesterday) and sooner or later in the US (see Ferguson).

Around the world, people are asserting a legitimate aspiration to devolve statist power bases and as the 21st century proceeds, this will likely develop into a major trend. We would also predict that – using our VESTS analysis – the confrontation between those who seek a more united world and those who wish for an increasingly fragmented (though peaceable) one will heighten.

Opportunities for freedom and free-market profits may emerge, just as certain kinds of opportunities may become evident as part of a further consolidation. But if the legitimate determination to create secessionist states is regularly frustrated, then the world may become a more unstable place. In its most extreme permutation, such a trend can prove troublesome indeed. Those who are swept up in one of these movements will need to watch carefully and act as necessary.

When it comes to the US, for instance, please remember that various observers have estimated the country is actually five or six separate nation-states. Meanwhile, fault lines have been deliberately built into the construction of nations in Europe and the Near East. France and Spain share the stubborn Basque culture, for instance. Afghanistan and Pakistan share the Pashtun nation.

If secession is a growing trend, there are plenty of candidates and more will emerge. This is a trend that bears watching … just as assets doubtless demand adjusting in order to obtain maximum protection. A second passport is advised. Physical gold and silver are suggested. A farm or apartment overseas might be a wise idea as well.

The permutations are almost endless but the trend is apparent.