STAFF NEWS & ANALYSIS
Shovel Ready: How The Fed Makes Us Dig Our Own Graves
By The Daily Bell Staff - April 11, 2017

I just read an article from what the mainstream considers a reputable source of news, the New York Times. The article talked all about monetary policy and didn’t say a thing about the real world.

Because the Federal Reserve is not operating in the real world. They are operating in a world of currency manipulation that they pass off as saving the economy. They act like they are guardians of the dollar when in fact they are just bandits for the government.

What the fed does to “cure” a bad economy is cut interest rates, which continues to make borrowing money easy. The money is there, but the actual value behind those dollars is not–that’s why the economy turned down in the first place. And that is what creates bubbles: when people keep spending easy-to-acquire money, even though tangible goods and services of value do not match how easy it is to get money.

So now the fed is basically stuck at a near zero interest rate when you adjust for inflation.

Right now, for instance, the central bank’s main short-term rate, the federal funds rate, is still only three-quarters of a percent to 1 percent, because the Fed wants to continue stimulating the recovery. This leaves the central bank with very little room to respond if the economy falters. Even a minor slowdown now could require a larger rate cut than is feasible, once again leaving policy makers wishing they could do more.

This dynamic can feed on itself. The less ammunition the Fed has to blast the economy out of its malaise, the weaker and slower will be the recovery, making it more likely that the next bad shock will require the Fed to cut rates more than is feasible.

Wait, you mean, they were just kicking the can down the road all along? And now they have reached the end of their ability to manipulate the economy without dire results? So all the little economic downturns they “helped avert” have really just been bundled up into one big giant bubble ready to burst and rain down, destroying the economy on impact.

It’s okay though, the government as always has the solution, and the New York Times is here to tell us what that solution is.

Perhaps the answer lies outside the Fed. It may be time to revive a more active role for fiscal policy — government spending and taxation — so that the government fills in for the missing stimulus when the Fed can’t cut rates any longer. Given political realities, this may be best achieved by building in stronger automatic stabilizers, mechanisms to increase spending in bad times, without requiring Congressional action.

Yes! So simple! They just have to spend more and tax more. And to avoid all this Constitutional-Congressional-approval-for-spending mumbo jumbo we can just make it automatic!

Genius. The diagram below shows just how well this will work. 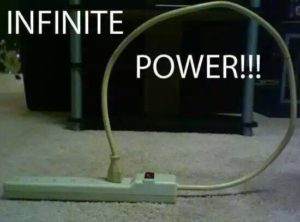 Observe the classic Keynesian economic system of plugging a power cord into itself which our government has been operating on for over a century.

The Fed’s Land of Make Believe

The fed cannot increase the actual value of the economy, all they can do is change how people react to that reality. When there is actual capital–not dollars but value, production, wealth–then interests rates would naturally go down as money can be risked by lending it out in various forms.

As this money is used for projects and becomes more scarce, interest rates would naturally rise because it would become riskier to lend. It is supply and demand, which the fed ignores, instead opting to create bubbles.

And what the New York Times article ignores is that the government cannot create value out of thin air by taxing and spending, it can only move value, and redistribute wealth. Sure, we can build more roads to employ people, but if there isn’t enough food being produced, full employment won’t stop people from starving.

The broken window fallacy persists. The lie is that a broken window stimulates the economy. What they leave out is that money is spent on a new window instead of being spent on something else. It doesn’t stimulate the economy, it manipulates where wealth is steered.

The fed and the government go around smashing windows pretending it will improve the economy. Of course, when the government is in bed with the window-makers, it helps them out a lot!

And this is why war is so popular among the Keynesian economic system our government uses to destroy wealth. Instead of broken windows, it is tomahawk missiles, jets, and drones. When these things are destroyed, it “stimulates” the economy exactly where the government wants it. The defense industry gets rich, instead of that money being spent on whatever the robbed taxpayers were going to spend it on. Any number of industries suffer because our money is stolen and thrown into the trash-pit-of-destruction that is the defense industry.

At least when welfare recipients take our money they only kill themselves if they spend it on cigarettes, alcohol, and crack. The welfare whores in the military industrial complex spend it on killing others and inflaming international tensions.

What do they care? More war only makes them richer.

And thus the fed continues to force the American worker to dig his own grave.

The economy depends on it. Don’t be selfish. Keep digging.