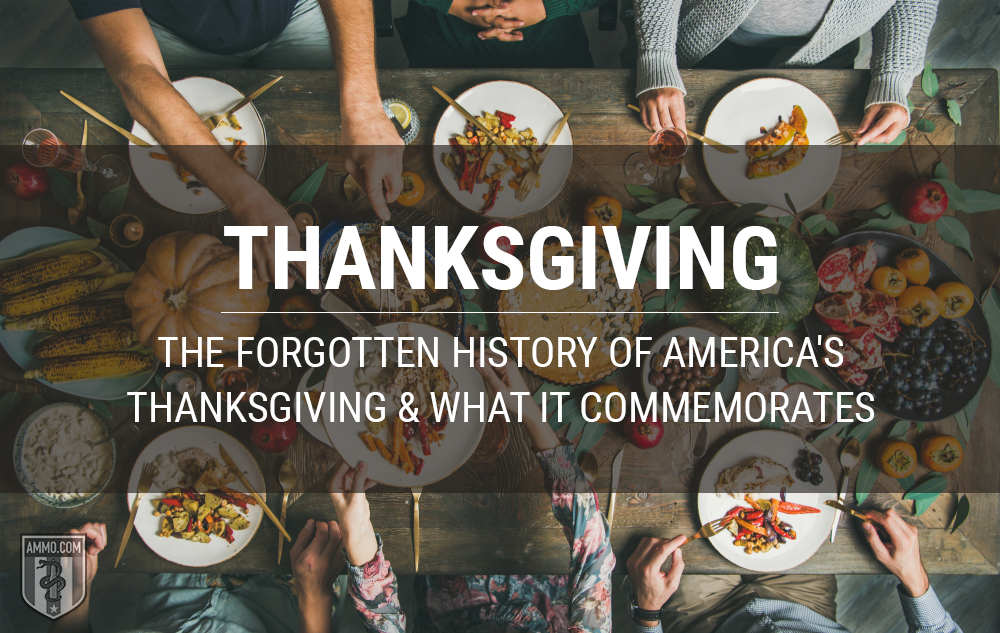 STAFF NEWS & ANALYSIS
Thanksgiving: The Forgotten History of America’s Thanksgiving and What It Commemorates
By Sam Jacobs - November 27, 2019

Thanksgiving is the oldest national holiday in the United States. However, it’s observation is not a continuous presence in American history. While the celebration of Thanksgiving predates even the founding of the nation, it was proclaimed by George Washington, then ignored by Thomas Jefferson. From then on, it was sporadically observed until Abraham Lincoln, who once again introduced a National Day of Prayer and Thanksgiving to the United States.

Indeed, it was Lincoln who set the day as the last Thursday in November. President Franklin Delano Roosevelt changed the day between 1939 and 1941, which was highly controversial. The days were called “Franksgiving.” Roosevelt changed the date because retailers communicated to him through the Retail Dry Goods Association and the Secretary of Commerce, that the late date of Thanksgiving that year (the last day of November) might negatively impact retail sales. It was considered bad form to put up Christmas decorations or put on Christmas sales before Thanksgiving.

If only we still lived in such times.

In 1942, Congress set Thanksgiving as the fourth Thursday of the month, and here it has stood since then.

The Early Days of Thanksgiving

Harvest feasts date back centuries, with the earliest “thanksgiving” celebrations in the New World dating to the 16th Century with the French and the Spanish. The Commonwealth of Virginia had regular celebrations of this type dating back to 1607. The first permanent settlement, Jamestown, Virginia, had a thanksgiving celebration in the year of its founding, 1610.

Of course, anytime someone says “Thanksgiving,” one immediately thinks of the Pilgrims. “Thanksgiving” as we know it is generally dated back to when the Pilgrims first celebrated it in 1621. This was in response to a successful harvest, however, it was not the first of a consistent celebration. The Pilgrims celebrated this only sporadically.

No one is entirely sure when the Thanksgiving celebration took place. There was a three-day celebration following their harvest, sometime between September 21 and November 11, with the Feast of Michaelmas (September 29) being the most likely date. We do, however, know that all 50 surviving Mayflower passengers were there, as well as 90 Native Americans. The feast was cooked primarily by four women, all of whom were on the Mayflower. Two years later, in 1623, following another boat of colonists arriving, the first civil (not religious) Thanksgiving took place in July.

The Revolution to the Civil War

The day of national Thanksgiving jumped around until the founding of the nation. During the late Colonial period, the Continental Congress merely recommended the day be celebrated by the various colonies. Samuel Adams drafted the first national proclamation, issued in 1777 – something to remember when you tip back one of his beers while watching the game. Revolutionary Commander General George Washington set the date in December of that year to celebrate early revolutionary victories.

In 1789, President George Washington would proclaim November 26, 1789, to be a National Day of Prayer and Thanksgiving. This day also provides the roots for America’s National Day of Prayer. In 1795, Thanksgiving was celebrated, again by presidential proclamation, on February 19. President John Adams continued the tradition in 1798 and 1799. The tradition was undone by deist and skeptic President Thomas Jefferson. President James Madison revived the tradition in 1814, but it remained sporadic until the Civil War. Many governors proclaimed celebrations statewide.

In November 1863, however, President Lincoln made the celebration national again. He was inspired by an editorial series written by “Mary Had a Little Lamb” author Sarah Josepha Hale. Secretary of State William H. Seward wrote the proclamation. During this period, traditions were regional and some of the food is decidedly not what we would consider to be traditional Thanksgiving fare today (pigeon pie, for example).

Franksgiving is one of those things like the court-packing plan that made FDR’s opponents squeal with laughter. FDR’s moving of the date of Thanksgiving caused his opponent in the previous election, Alf Landon, to compare him to Hitler. James Frasier, chairman of the Plymouth, Massachusetts board of selectmen heartily disapproved of the change.

The change caused a number of problems, not least of all holiday travel plans. Football teams around the nation played before empty stadiums because they couldn’t change their schedule. Many games were cancelled. In what is a familiar scenario to anyone who has followed 21st-century politics, Democrats narrowly supported Franksgiving (52 to 48), Republicans widely despised it (79 to 21) and most of America didn’t like it (62 to 38).

All told, 23 states and the District of Columbia recognized the new date, while 22 preferred the traditional date. The remaining three (Colorado, Texas and Mississippi) went with both dates, meaning there was plenty of time off for everyone. In 1940, 32 states and the nation’s capital went with Franksgiving, while the remaining 16 opted for what was called “Republican Thanksgiving.”

A report from the Department of Commerce issued in 1941, found that there was no difference in retail sales due to the day of the month. Indeed, barely more than a third of all retailers even observed Franksgiving. What’s more, only two out of every seven Thanksgivings would fall on a fifth Thursday rather than a fourth. Still, a joint resolution of Congress, signed into law by President Roosevelt, permanently moved the date to the fourth Thursday, where it has stood ever since. Most states concurred, and while revelry was on the back burner thanks to the war, Thanksgiving in its final form took root by 1945.

If you ever find yourself watching the Merrie Melodies cartoon Holiday Highlights, you’ll notice a reference to two different Thanksgivings – one for Republicans and one for Democrats – that will now make sense to you.

Texas was the last state to observe the traditional “last Thursday” Thanksgiving in 1956.

While it has its roots in European harvest festivals, there is perhaps no more quintessentially American holiday than Thanksgiving. Americans eat more food this day than they will any other day of the year, including the Fourth of July and Christmas Day. Unsurprisingly, there are people who think that the celebration of Thanksgiving is shameful and should be abandoned.

The rest of us, however, will enjoy stuffing ourselves with turkey, slipping into a tryptophan coma, and waking up just in time to catch the big game or the parade. Real Americans, as it turns out, would much rather enjoy a day off than complain.

Thanksgiving: The Forgotten History of America’s Thanksgiving and What It Commemorates originally appeared in the Resistance Library at Ammo.com.