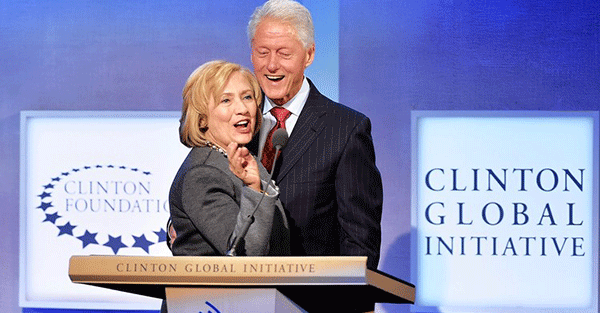 When it comes to which candidate is best prepared to tackle matters of public health, the choice is clear to Microsoft co-founder and philanthropist Bill Gates. [He] told STAT News in an interview published Friday that while his organization would “approach any administration with a positive open mind,” he has more experience with both Hillary and Bill Clinton through the Clinton Foundation. – STAT

The STAT article excerpted above indicates that the Bill Gates is leaning toward endorsing Hillary Clinton.

It would be surprising if he didn’t.

One can make the argument that the Clinton Foundation is a kind of organized crime racket.

The Clintons have ties to officials at the most important multinationals, banks and governments.

That includes Gates. None of these people can easily afford to antagonize her.

Bill and Hillary have surely used their power and influence to secretly steer US government relationships and resources to those who donated to the Foundation.

She has been accused of being especially active in soliciting donations during her time as Secretary of State.

Any donor can become  a money laundering suspect if charges are leveled at Hillary Clinton and then, inevitably, at the Foundation itself.

It would seem the world’s most powerful people have a stake in ensuring that Hillary walks.

So does President Barack Obama, who personally received unsecured emails from her server and replied.

Hillary and former President Bill Clinton reportedly earned over $150 million in speaker fees after he left the White House.  All of the Clinton campaigns have had corporate backing … The Clinton Foundation has received some $2 billion in donations … The money, in the speaker fees and Foundation scandals, came from Wall Street, corporations and foreign donors.

Were Hillary indicted, Foundation donors could be the target of questions about their own beneficial treatment.

And there are also significant questions about how the Foundation actually spent its resources.

Its bookkeeping is said to be an impenetrable mess. Bloomberg has reported that the Foundation failed to list some 1,100 donors.

The Bill And Melinda Gates Foundation is among the very largest Clinton Foundation donors, having donated some $25 million to the Foundation.

It jointly supports a women and girl’s initiative with Hillary and Chelsea Clinton launched in 2013.

Gates is not going to endorse Hillary because he likes her or admires her.

Like others, he’s well aware of her influence- and that she probably has a good chance to be President.

There is a brooding, powerful presence surrounding Hillary and driving her forward.

It includes the world’s most powerful people who have either done business with her or are involved  in the same system.

In fact, the very corruption that surrounds Hillary binds these people closer together.

It is still possible that she will be indicted and that the Dept. of Justice will place on her trial.

But this would likely have to happen before the Democratic convention.

Conclusion: Hillary is playing for very high stakes. The same corruption that shields her, likely provides her with a pathway toward success.