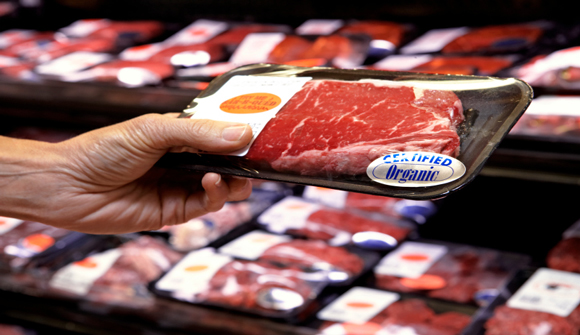 Organic Food Movement Threatens Big Brands … The food industry is inexorably tied to the marketing industry. Whether or not they believe it, consumers are influenced by advertisements and the ways in which companies portray their products. Food is likely one of the most demonstrable examples of the power of suggestion. Especially as health foods gain traction, a company can highlight or hide various aspects of its product through packaging. – Organic Consumer's org.

Free-Market Analysis: We've struggled with the exact nature of the organic meme because it is a shifting target. As "organic" becomes more popular, regulatory authorities continue to expand definitions of what it is and who is able to utilize the word for what purposes. As these regulations expand the definition, various corporations are trying to identify their products with the expanding trend.

But we should also be careful to point out that no matter what the complications are now, the "organic food movement" represents a continued challenge to Big Agriculture.

As Americans move toward locally-grown, organic and generally healthier foods, big-name brands are feeling left out. According to the Washington Post, major brands Kellogg, Kraft and ConAgra – which owns Chef Boyardee and Swiss Miss – have cut their growth forecasts and/or registered disappointing profits for 2014. There are many factors at play, including global economics and resource availability. But as the Washington Post pointed out, those are yearly obstacles. What is more troubling for these companies is the changing landscape of consumer preferences.

… While this is not what the food giants want to see, it does mean now is a good time to be a new, local and healthy food provider. Consumers are turning to other options these days, so small food industry players will get a chance to stake their claim in the market.

The same thing that is happening in the organic sector has happened in other areas of the economy over the past decade. What we call the dialectic is continually shifting.

The gun control conversation has shifted radically away from licensing and toward carry options. The monetary conversation, which didn't exist prior to 2000, now includes crypto-currencies like bitcoin and precious-metals-as-money. There is a growing anti-vaccine conversation and a dialogue over pro- versus anti-biotics.

And there is a significant conversation regarding organic food versus "green" production and GMO. We tend to forget how quickly the conversation is changing. Marijuana is being legalized – and maybe harder drugs as well. All of these sociopolitical changes are the result of a renewed discussion over what was once considered settled policy, especially in the West.

One can certainly argue that this past decade has been anomalous but one can also argue that the power elite itself has been forced to make narrative boundaries a good deal more flexible.

The ability to expand the conversation to include narratives previous considered "beyond-the-pale" enables ongoing elite control of levers of power. But at the same time, the expansion of these narratives presents us with a considerable loosening of certain social parameters.

When more is considered to be fodder for normal conversation, it is inevitable that authoritarianism itself is deprived of considerable justification. If authoritarian approaches are nonetheless insisted upon, the conversations now taking place will tend to undermine rules and deprive rulers of necessary justification.

This is a real consequence of the current "information revolution" and it is one that will continue to play out. Those interested from a philosophical or investment standpoint should note that trends offered by cannabis, farmland or organic foods – and other such expanding industries – will likely continue to provide opportunities.

It is not the 20th century and the Internet is a process, not an episode.