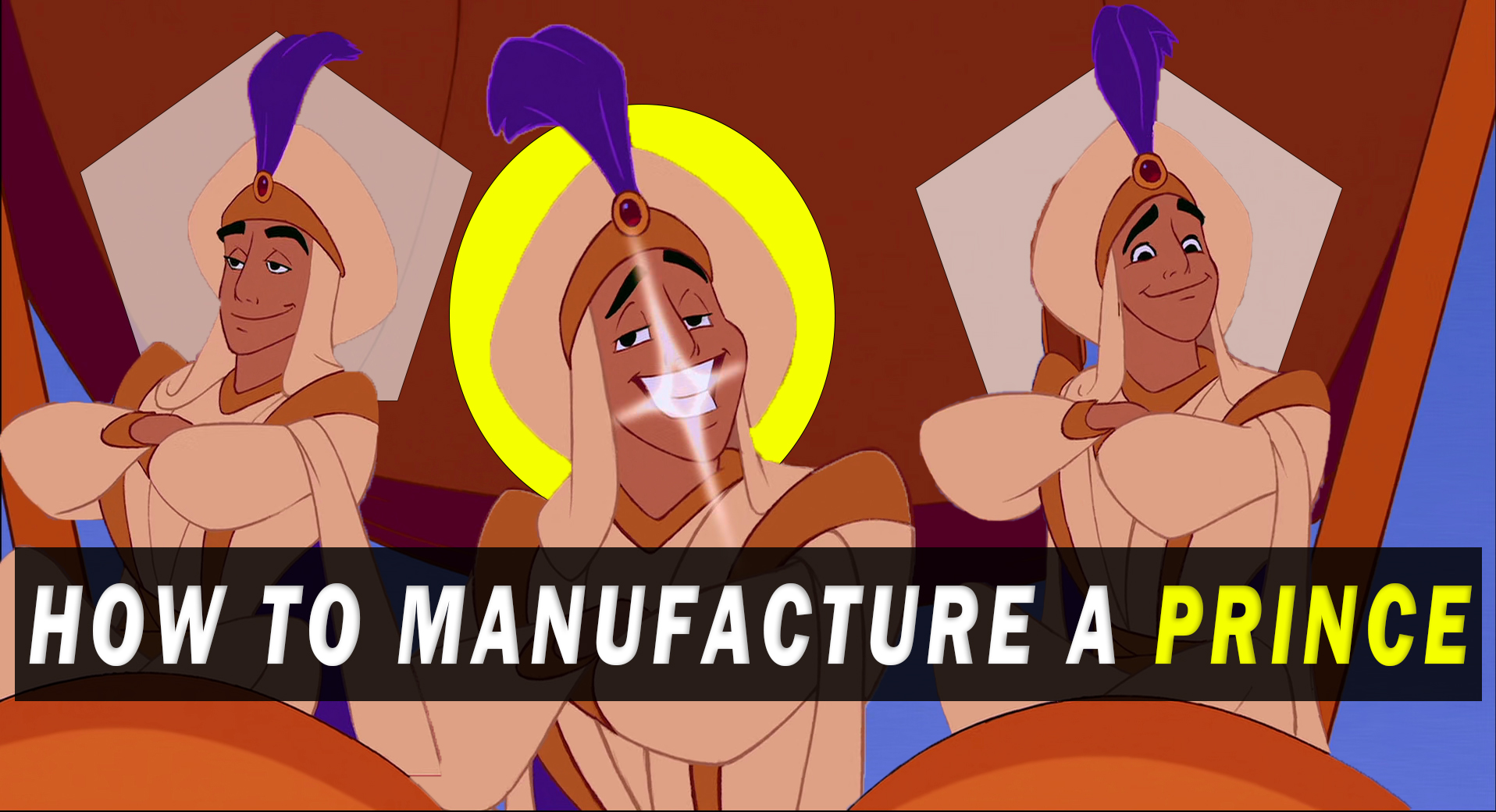 STAFF NEWS & ANALYSIS, Videos
These Tricks can Transform a Peasant into a Prince
By Joe Jarvis - April 08, 2021

Aladdin wants to marry Princess Jasmine. But she can only marry a prince.

So Aladdin uses the first of his three wishes to ask the Genie to make him a prince.

Of course the Genie doesn’t have unlimited power. He apparently can’t create a new country out of thin air and install Aladdin as Prince, nor can he go back in time and make Aladdin’s parents royalty. All he can really do is make Aladdin seem like a prince.

So he starts with the clothing. Dressed like a prince, Aladdin’s identity immediately carries some authority. It creates a psychological trigger, a shortcut in the mind, that people should treat him as they would treat a prince.

Then the Genie turns Aboo, the pet monkey, into an Elephant. Street performers and con artists have pet monkeys. Instead, now Aladdin will ride into town on a status symbol– a big powerful elephant.

But that is not enough to create a prince. You need to enlist the masses if you want your prince to have any princely power. Who would the Kardashians be if they weren’t shoved down the public’s throat? (Come to think of it, who are the Kardashians anyway? People who found a genie.)

So in a grand demonstration of wealth and power, the Genie rebrands Aladdin as Prince Ali-Ababua and parades him into town flanked by a magnificent host.

And from the first line, “Hey clear the way in the old bazaar,”– we’re talking about a crowded marketplace. People are there to buy what they need, people are selling their goods, they’re shoving, bumping– they’re not clearing the way for just anyone. They got stuff to do, what do they care, why are they going to stop and be distracted?

But the Genie, the ringmaster of the whole affair–Aladdin’s public relations guy–starts drumming up some excitement about his “bright new star,” telling everyone to “come be the first on the block to meet his eye.”

There’s some exclusivity in seeing the new celebrity.

“Make way, here he comes, ring bells bang the drums”– seriously this is someone important.

“Are you gonna love this guy,”– setting up expectation– “Prince Ali– fabulous he– Ali Ababwa.”

The Genie doesn’t just say his name, he adds some descriptors– fabulous, later he’ll add mighty is he, and amorous he.

As the Genie sings, “Genuflect, show some respect, down on one knee,” he pulls the carpet out from the Palace Guard, causing them all to involuntarily genuflect. Now the entire city just saw the Palace Guard kneel before this Prince… he must be important if the palace guard is immediately bowing to this guy– who is he?

Brush up your Sunday salaam

Then come and meet his spectacular coterie”

“Now, try your best to stay calm”– more expectation setting– it’s going to be hard to stay calm at what you’re about to witness, just like I explained in my video on hypnotism– sometimes the hypnotist will tell people not be hypnotized yet as a form of priming them to be hypnotized because now they can’t stop thinking about it.

“Brush up your Sunday salaam

Then come and meet his spectacular coterie.”

Got to put on your Sunday best if you want to meet this guy, dress up, you’re unworthy to even be in his presence in peasant clothes. And then come meet his “spectacular” entourage– obviously this guy doesn’t simply travel alone.

Then the Genie starts disguising himself as regular townspeople to spread the news of Prince Ali’s fabulous feats.

“He faced the galloping hordes! A hundred bad-guys with swords. Who sent those goons to their lords? Prince Ali!”

Townspeople of different demographics are getting social proof from their apparent peers. People just like them are spreading tales of Prince Ali’s valor, they can relate to the message.

While the chorus describes Prince Ali’s immense wealth including “75 golden camels”, and “a world class menagerie”, the Genie appears as news commentators. “Don’t they look lovely June? Fabulous Harry, I love the feathers!” reinforcing and scripting how the people are supposed to react– they should be in awe. He’s got style. He’s got wealth.

I think about this every time the news starts drooling over a politician’s outfit.

So Prince Ali is making his way through town, and once again the Genie appears as a regular townsperson so that the gossip about Prince Ali appears to be coming from every corner of the city– this time he’s a voluptuous women, “weak at the knee” over how handsome Prince Ali is.

“Well, get on out in that square

Adjust your veil and prepare

To gawk and grovel and stare at Prince Ali!”

A call to action– seriously you don’t want to miss this, and more expectation setting– gawk, stare and grovel– grovel you peasants, at his magnificence. You’re a peasant, he’s a prince. What should you do? Grovel.

(he’s got the monkeys, let’s see the monkeys)– And at this point the Genie adds some cheerleaders and hype men to pump up the crowd with excitement.

And to view them he charges no fee,

Looks like it’s time to cancel Aladdin! They actually cut this line out of the new live action movie they made. Maybe they were afraid people couldn’t relate to a protagonist who owned slaves, or maybe they were trying to gloss over the fact that middle-eastern countries have been the biggest slave owners throughout history.”

he’s got servants and flunkies,

They bow to his whim, love serving him,

They love him, even the slaves, he’s a great master.

Heard your princess was a sight lovely to see,

And that, good people, is why, he got dolled up and dropped by,

With his bears and lions,

A brass band and more,

His forty fakirs, his cooks, his bakers,

His birds that warble on key,

And just like that, the entire city is brought under the Genie’s spell to believe that Aladdin, a common street rat, is a Prince. And not just any prince either! A rich, strong, powerful, benevolent– slave owning– prince!

This is how the media, Hollywood, politicians, and the elite–the cabal–operate. There are no real princes, they are all manufactured.

Just think of the social media influencers on their private jets– there’s a whole business of renting jets which never leave the ground, to people who want to take instagram photos.

You can bet half of them don’t own the Lamborghinis in their stories either. In fact, I’m not even filming this video in my own house right now.

But that doesn’t mean you should go out and pretend to be something you aren’t in order to succeed.

In fact, the irony of Aladdin’s whole prince-schtick, is that it was aimed at attracting Jasmine– but the show repulsed her!

She storms off the balcony, “I am not a prize to be won!”

She thought he was cocky and arrogant. Aladdin totally missed the mark on what his target audience was actually after.  Because he wasn’t being himself.

As much as you might want to appear as royalty, most of us, for what we’re after, don’t have to pretend to be something we are not. Faking an identity is typically sending a message to the wrong crowd anyway– it’s much easier to use your real personality to attract whatever people  are naturally like-minded. Otherwise, the attention that you get will not be from your target audience.

You have to know who your prospects are, what motivates them, and what they really want.

Really, you need a little empathy. If it’s all about you, people will smell it a mile away.

And this doesn’t only apply to literally selling things for money.

If you’re trying to get a date, ask for a promotion, or raise a teenager, understanding your target audience is the key to your success.

That’s why in an upcoming video, we’ll dive into figuring out the level of awareness of your target audience, in order to understand how to most effectively deliver your message to them.

Make sure you subscribe and hit that notification bell so you don’t miss it.