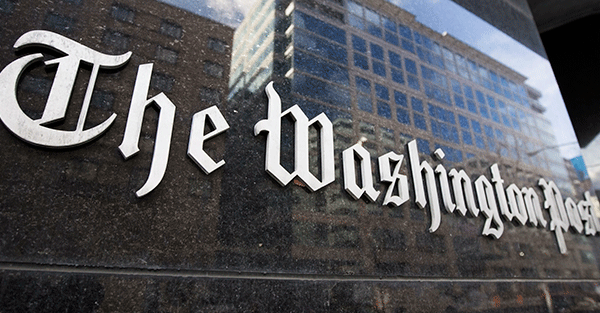 Trump revokes Post press credentials, calling the paper ‘dishonest’ and ‘phony’ …  Why did Donald Trump revoke The Post’s media credentials?  … Donald Trump said Monday that he is pulling The Washington Post’s credentials to cover his events because he is upset with the newspaper’s coverage of his campaign. -WashingtonPost

Donald Trump is probably justified in revoking the Post’s credentials. It really is a dishonest newspaper that manipulates news on a regular basis.

The Post doesn’t see it that way of course.  It treats Trump’s revocation of their credentials as a freedom of the press issue.

In a statement, Post Executive Editor Martin Baron said: “Donald Trump’s decision to revoke The Washington Post’s press credentials is nothing less than a repudiation of the role of a free and independent press.

When coverage doesn’t correspond to what the candidate wants it to be, then a news organization is banished.  “The Post will continue to cover Donald Trump as it has all along — honorably, honestly, accurately, energetically and unflinchingly.”

In fact, the Post has a long history of presenting the news in a way that supports the agenda of the US military-industrial complex and its banking backers.

The Washington Post is not alone when it comes to this sort of manipulation.

Project Mockingbird was a CIA effort in the mid-20th century to use American media for propaganda purposes abroad.

The CIA recruited a number of top publications for the effort, and these included TIME and the New York Times as well as the Post.

During the tumult surrounding the Vietnam war, various CIA manipulations were exposed and denounced.

Project Mockingbird itself came under attack because the propaganda the CIA was planting abroad was circulating in the US as well. In other words, propaganda intended for enemies was instead influencing US public opinion.

Trump is no doubt aware of Project Mockingbird and the sordid history of American mainstream journalism.

As with the “war on terror,” Trump unfortunately doesn’t entirely reveal what’s going on.

We wrote an article yesterday suggesting that Trump should explain the roots of the war on terror instead of simply denouncing “terrorists.”

By referencing and explaining Project Mockingbird, he could reduce the Post’s credibility.

Trump could also mention there is a new bill in Congress that resurrects Project Mockingbird.

According to BeforeItsNews, the  ‘Countering Information Warfare Act of 2016’ (S. 2692) or ‘Countering Foreign Propaganda and Disinformation Act’ of 2016 “has many characteristics of the CIA’s Operation Mockingbird and has been referred to as ‘The US Ministry Of Truth’.”

The US Government is at it again. Same Dirty tactics of the cold war era taken from their bag of tricks, dusted off, repackaged and presented to the public as a necessary means for ‘National Security’.

Once again the free press is not only under attack, it is being used as a front for a propaganda war! Just like all warfare, the people pay the price!

In fact, there are other analyses that show the current bill is hardly necessary. Reportedly, HR 4310, the 2013 National Defense Authorization Act, Section 1078,
authorizes the use of propaganda inside the US.

CIA propaganda is alive and well in the US, even without further enabling legislation.

We would argue legislation isn’t even necessary anymore. The 13 or so separate US intelligence agencies are above – or beyond – legislative remedies.

Many in the alternative ‘Net media seem to believe Trump, if elected, will reverse the authoritarian and anti-freedom tide flooding the US and the West.

We hope this is true, but in just the past two days Trump has issued statements that were certainly not as accurate as they could be.

He blamed the Orlando shooting on militant Islam, without explaining that the “war on terror” is essentially Western invention.

And now he has labelled the Post’s coverage of his campaign “phony” without providing a larger frame of reference that would put the Post’s devious editorial policies into clearer perspective.

Perhaps Trump believes that speaking blunt truths about the US media would only complicate his political positions. But we’d argue such a position would be well received by many in the US.

In fact, according to the latest Gallup survey, newspapers and TV are less popular than ever. The new poll showed that “just 20 percent have confidence in newspapers, a 10-point drop in 10 years. TV news saw an identical 10-point drop, from 31 percent to 21 percent.”

From what we can tell, Trump has spoken more honestly about the US economy and military industrial complex than almost any other politician running a major campaign.

Unfortunately in the instances we’ve identified, he could go much farther than he has. Quite understandably, he may be concerned about speaking more clearly.

Conclusion: That’s the problem with politics generally. It’s the reason we continually emphasize that even the most courageous and knowledgeable politician is not going to be able to make a big difference in either the US or the world. Of course, we’d be happy if Trump proved us wrong. Unfortunately, we don’t think he will.