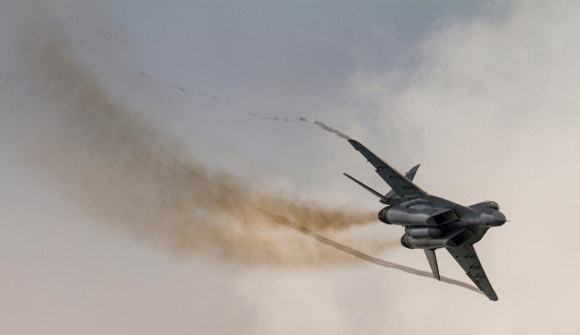 NATO urges calm after Turkey downs Russian jet … NATO and UN urge a de-escalation in tensions between Ankara and Moscow after Turkish planes shot down Russian jet. … NATO has called on Turkey and Russia to show restraint as tensions rise in the wake of the downing of a Russian jet near the Turkey-Syria border. The Russian warplane was shot down for violating Turkish airspace on Tuesday morning, Turkish officials said, angering Russia's President Vladimir Putin, who likened the incident to being "stabbed in the back". According to Russia Today, Russia's defence ministry has announced that it is suspending its military cooperation with Turkey following the incident. – Al Jazeera

Free-Market Analysis: It's nice that NATO is concerned about world peace. Russia seems angrier. Following Turkey's downing of a Russian jet near the Syrian-Turkey border, Vladimir Putin called Turkey's actions a "stab in the back."

What Putin meant by this was that Russia was removing ISIS from Syria, presumably a goal shared with NATO. Yet Turkey, a NATO country, shot down a Russian jet involved in fighting a common enemy.

"As we have repeatedly made clear, we stand in solidarity with Turkey and support the territorial integrity of our NATO ally, Turkey," Stoltenberg reportedly said after an emergency meeting of NATO. "I look forward to further contacts between Ankara and Moscow and call for calm and de-escalation. Diplomacy and de-escalation are important to resolve this situation," he said.

Putin was a good deal blunter. "Today's loss is linked to a stab in the back delivered to us by accomplices of terrorists," he is reported as saying. "I cannot qualify what happened today as anything else. Our plane was shot down over the territory of Syria by an air-to-air missile from a Turkish F-16 jet. It fell in Syrian territory four kilometres from the border with Turkey. Our pilots and our plane did not in any way threaten Turkey."

Of course, really Putin cannot be blamed for feeling this way. NATO and the Anglosphere generally have been pushing Putin relentlessly. First there was the standoff with Georgia, and then when that was resolved, the West went after Ukraine. Now the West is in Syria, trying to consolidate that country's alliances as it pushes out the Assad regime.

Syria is the last domino. After that, there is only Russia itself. Of course, Russia is not Libya, Iraq or even Syria. Russia is a big country with a motivated population and advanced weapons. What the West wants, then, is at the very least a military standoff with Russia.

Presumably this is necessary because the West's economic system is in shambles. Central banking can only create a faux expansion for so long before economies collapse. Bubble economies inevitably give way to recessions and depressions. And that's where war comes in.

We can see this played out before World War II, when nothing the West tried to do worked. Keynesian remedies were no more utile than any other kind. The only thing that can be done is to let bankrupt firms collapse.

But in this case, such a collapse would mean the end of the current economic system. And that is not feasible from the point of view of those who run it. And thus, there is a need for war and when it comes to Russia, at least significant military tensions.

Paul Craig Roberts, whose work we follow, is more cognizant than most when it comes to this particular militaristic paradigm. His recent article, "Turkey Has Destroyed Russia's Hope Of Western Cooperation," deals with the reality of what's actually taking place rather than the rhetoric.

Turkey's unprovoked shoot-down of a Russian military aircraft over Syria raises interesting questions. It seems unlikely that the Turkish government would commit an act of war against a much more powerful neighbor unless Washington had cleared the attack.

Turkey's government is not very competent, but even the incompetent know better than to put themselves into a position of facing Russia alone. If the attack was cleared with Washington, was Obama bypassed by the neocons who control his government, or is Obama himself complicit?

Roberts is speculating here on why Turkey shot down the Russian jet. He doesn't believe for a moment that Turkey was merely defending its borders.

This is because Roberts sees the Middle East wars in totality. He implies that the disparate military gambits are really part of one effort, writing, "Throughout the entire Washington orchestrated conflicts in the Middle East, Africa, and Ukraine, the Russian government has spoken reasonably and responded in a diplomatic manner to the many provocations."

Notice the word "provocations." Just as we do, Roberts sees Russia as the ultimate prize. For one reason or another, the US wants to grapple directly with Russia. He is hopeful that the downing of the Russian jet shall finally disabuse Putin of the idea that he should cooperate with the West, and the Pentagon in particular.

He writes that the "silver lining" of the shoot-down may be to "save" the Russian government from making a mistake by joining a coalition with the West against ISIS.

"Diplomacy has now proven to be a dead-end," he writes. "If Russia does not join the real game and begin to play its strong cards, Russia will be defeated."

This is his bluntest statement, acknowledging that the West's various provocations are really part of the long war against Russia itself, and perhaps even China if the West pushes Russia too hard.

More and more this is an Orwellian-looking strategy that divides the world into three warring entities in order keep the military-industrial complex in business and free markets – and freedom generally – at bay.

It is certainly not clear that the West wants a thermonuclear war but there are forces in the West that obviously would be pleased to exist in a perpetual state of military tension with other great powers.

As we've pointed out, existing within this paradigm is not a very pleasant prospect. We urge all those who can to seek the kind of lifestyle insurance that provides them with alternative approaches and a maximum degree of independence.