“It’s basically an intergalactic invasion into this space through people…. It’s what all the ancients said, it’s what they warned of, it’s what we’re dealing with. They’re demons. They’re freakin’ interdimensional invaders, okay? I’ll just say it, make fun of me all you want on CNN or wherever, but everyone already innately knows this. These people are not freakin’ humans, okay? Hillary Clinton is a goddamn demon.”

In a past era, I chalked all that up to just hyperbolic performance art, for which Jones is deservedly infamous. No one screams rage-fueled creative epithets into microphones like him.

Recent events, though, have forced the conclusion, based on repeated documented episodes of disturbing public behavior and policy prescriptions, that Jones might have been onto something.

I can no longer dismiss out of hand the possibility that Western “leaders” are literal demons.

Exhibits A and B: Canadian Deputy Prime Minister and Minister of Finance Chrystia Freeland, and US House Speaker Nancy Pelosi, respectively:

Above (to the left, above the sign-language translator box, which there are inexplicably two of): PM Justin Trudeau dutifully reads his WEF script announcing unprecedented financial crackdowns on dissidents for peacefully expressing their speech per their rights as citizens in a “free society.” Chrystia, or whatever entity has commandeered her faculties, apparently visibly stimulated by this fascist talk, exhibits all the outwards signs of demonic possession, like Reagan in the exorcist: 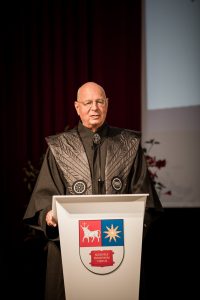 And then we have Nancy Pelosi during the recent State of the Union address in which an amphetamized Joseph Biden stayed up way past his usual bedtime to do vacant talking points.

In the middle of the State of The Union, I text Nancy Pelosi that it was conference weekend pic.twitter.com/kiumBROj1S 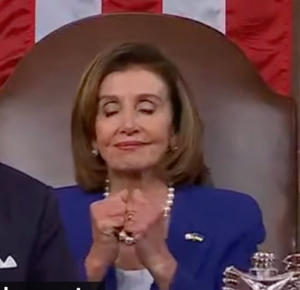 Above: Pelosi touches herself in apparent orgasmic pleasure while Joseph Biden reads the script his handlers wrote about chemical burn pits and troop cancer

Let us not overlook the weird cackling fits these Swamp creatures (or whatever they are) often break into, in the most socially awkward manner possible.

Ostensibly, their hyena-like laughing bouts are calculated to mimic the real human laughter reflex as a response to humorous stimuli in the environment. Apparently, somehow, they believe these disturbing vocalizations are endearing to their base.

Again, during one of Kamala’s apoplectic “laughing” fits, she comes with the weird Pelosi-esque hand thing:

It’s almost like a physical gesture to signal pure submission to the evil spirits within as they fully overtake her human flesh, speaking and gurgling through her.

And Hillary (gaze not too long into the abyss, lest it engulf you):

Have you ever imagined that a human with human feelings could become so visibly giddy – as carefree and lighthearted as a pig rolling around in its own feces — about the assassination of a foreign leader halfway around the world?

One who did not pose any threat to US national security interests, whose killing precipitated the destruction of an entire nation, welcomed in violent religious extremists to terrorize its people, and plunged it into a decades-long civil war that continues to this day? The capital of which now features literal slave auctions?

And AGAIN with the weird hand gestures

You don’t need to be a clinical psychologist to find all of these mannerisms and behaviors deeply unsettling.

Of course, there are other, more worldly plausible explanations for their disturbing behavior.

Alternative explanatory theory: The culprit could be lots and lots of pharmaceutical cocktails. These creatures undoubtedly down benzodiazepines like Xanax and amphetamine such as Adderall like Pez candy.

Shooting the geriatric overlords up with drugs is the easiest way simultaneously jumpstart their decaying nervous systems and to ease the conscience – assuming they had one to begin with, and aren’t natural-born psychopaths:

The cause for their cringe behavior could be all three: literally demon-possessed, with psychopathic personality traits, plus high as kites on pharmaceutical cocktails.

In any case, the Swamp creatures, from the president on down, at the very least, deserve a thorough, no-hole-uncovered clinical evaluation as a precondition for holding power.

Nuclear buttons require sound minds to not press them.

Let’s assume, for the sake of argument, that these people’s souls are not gripped by the antichrist or his (or her, or zher) minions.

On what planet would their PR specialists – which such high-level politicians have in spades on staff – not try to moderate the politicians’ public displays of bizarre behavior? One can only conclude either that:

a.) the PR people have tried and failed to corral their behavior, or

b.) Nancy Pelosi’s and Kamala Harris’ demon masters, beyond the control of liberal arts majors, are slowly unveiling themselves, given that whatever the public thinks about its “leaders” is increasingly irrelevant:

“When a majority of citizens disagrees with economic elites and/or with organised interests, they generally lose. Moreover, because of the strong status quo bias built into the US political system, even when fairly large majorities of Americans favour policy change, they generally do not get it… average citizens and mass-based interest groups have little or no independent influence [over US policy].”