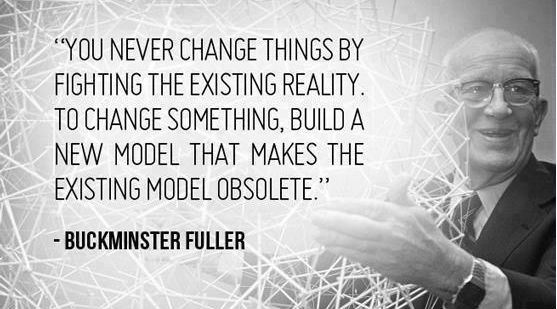 Startup societies are disrupting the industry called government. New methods of governance are being experimented with that promise to make the old dinosaurs of social control go extinct.

When new governments are formed, people can vote with their feet for the best style of governance.

If people want to join a commune, they can go right ahead, but they won’t be able to force others into the mix with them.

That means the people who want to innovate, start a business, create wealth, and try new methods of running society will have that opportunity. They have the chance to show the world a better way, or simply fail and only hurt themselves.

It is not so much a particular type of society we need to try (though I have plenty of opinions on that); what we need is to simply be able to start trying.

Let governments be a service offered to customers. Let people choose what kinds of laws and regulations they want to live under. Allow experimental government, and we will quickly see the benefits and detriments of various philosophies and systems.

That is the goal of the Startup Societies Foundation: allow different types of social systems to be explored.

Many of these experiments fail before they can really be tried. This first hurdle is the biggest one. We need to find a way to set up these micro-governments in order to be the Petri dishes of future society.

That is why the Startup Societies Foundation does research on past and current city states, micro-nations, and special economic zones. They find out what worked, and what caused failures.

At this early stage in the organization’s history, the biggest benefit they give is connecting people at summits to share knowledge, ideas, expertise, and technologies that will make this dream a reality.

…politics has not kept pace with this exponential growth. Elections around the world have been polarizing and unconstructive. Poverty, inequality, injustice, tyranny, unaccountability, ecological disaster and transparency seem to be rampant.

It is time to use entrepreneurship to create better governance. By creating a “startup society”, (an experimental government in a small geographic area) governance has the ability to experiment when traditional government cannot…

Like a startup, a startup society begins small and scales when it produces a better service through technology.  65% of the earth’s population will live in cities by 2040. This presents an unprecedented opportunity for entrepreneurs. They can become innovators of the greatest wealth creation tool: cities.

The next conference will be in San Francisco on August 11 and 12th. If you are in the area or want to travel, you can get tickets to attend the event through the IndiGoGo campaign. But even if you cannot attend the summit, consider donating to support this organization which is making strides towards a better society.

(By the way, this is the same organization which used Bitcoin to crowdfund a Venezuelan man’s escape from the crumbling socialist dictatorship.)

But don’t just take my word for the necessity of competition among governments to improve society. Let’s take a look at some historical examples.

In the 1600’s people starting coming to America from England to form permanent settlements. Various plantations were chartered by private companies and individuals. Roger Williams was kicked out of the Massachusetts colony for promoting religious tolerance and went on to form his own colony in what is now Rhode Island.

The Native Americans liked him because he traded with them, and learned their language. He was truly interested in what they had to offer and criticized other westerners who thought of them as savages. After all, Williams argued, the people of Britain were not so different 1000 years before.

Officials from Boston, Plymouth, and Salem fought to stop Williams from staking out his own government philosophy for the colony he started, but he fought back and persevered to keep his vision of a free society intact.

The colony itself has obviously been absorbed by larger governments, but the foundation of freedom left its mark on the developing nation. Roger Williams created something new, gave people a choice, and helped grow America into an economic powerhouse. His example is one to study and emulate.

European countries, kingdoms, and principalities were forced to compete with each other due to the nature of the land mass. Because of the many geographic barriers and separations, statelets were kept relatively unique and small, which led to competition.

If one state adopted a promising technology, say the printing press, other countries would have to adopt it and therefore advance, or risk being outcompeted economically or militarily by their neighbors. Europeans quickly adopted the printed press, leading to a period of rapid enlightenment in which access to information allowed huge advancements in technology and the standard of living.

The Ottoman Empire, however, banned the printing press, keeping them in stagnation, and under the old power structure which maintained control but strangled prosperity, education, and advancement.

Europe’s decentralization fueled the growth of industry by allowing inventions and innovations to travel easily from statelet to statelet, but not be so easily wiped out by decree of one ruler.

If a ruler was against a promising advance in society, you needed only travel a hundred miles and settle in a place where the government was more conducive to freedom, technology, or whatever it was you were looking for.

China, on the other hand, shows what happened under a singular united power. First, the area was quite advanced, especially the naval fleet which traveled all the way to Europe with advanced ships a thousand years before Columbus sailed. They were lucky to have people in power who promoted innovation.

But that changed with the flip of a coin when a rival faction took power. They dismantled the Navy, and outlawed shipping, in order to crush their rival faction. This set China back immensely. Unlike Europe, you couldn’t simply move 100 miles and be free to resume shipbuilding. The giant landmass of China was united under very few rulers, and what they said was the law.

So it is not impossible for a large centralized government to allow civilization to advance, but it is a coin toss. Many competing states in a relatively small area, however, require rulers to be open to new ideas, or else lose their power to rival states.

The “market” for where people want to live and work dictated to the European rulers what they had to do in order to make their countries attractive and prosperous.

The Modern City States and Micro-Nations

Because of these historical examples, it should be no wonder that some of the most innovative and technologically advanced countries are very small.

Dubai is embracing technology, erecting magnificent buildings, and will soon be transporting people around in drone taxis.

Singapore is one of the most business and investment friendly places on Earth, which means more innovation and experimentation.

Liechtenstein is leading the way in small rich countries with a decentralized government, and the ability of each town to secede.

But the problem is that it is hard to form a small society that is not already carved out of the larger land masses governments control. Places like Catalonia are trying, but the states they are trying to secede from are obviously not too keen on the idea. Spain is fighting hard to keep Catalonia in its grasp, all while trying to bring an unwilling Gibraltar back into the fold.

Cities are becoming more popular but their governance is inherently different in needs than suburbs and the countryside. An ordinance about noise, or owning chickens makes sense in a city, less sense in a suburb, and no sense at all in the countryside.

Yet look at New York City, which basically dictates what type of government the entire state of New York will have. Why should the government of farm country in upstate New York be subject to the same government as one of the largest most populated and diverse cities on Earth?

It shouldn’t. They have nothing in common, and the only reason these vastly different peoples are grouped together is by arbitrarily drawn borders from politicians and governments wishing to assert their control.

There is really only one group of people who have any reason to be against startup societies: the people who currently hold power. Allowing people to go their separate ways is a major threat to the powers that have held control over humans in the same way for thousands of years.

They are terrified that someone is going to create a better system that actually solves the problems government has been pretending to solve, but really only exacerbating.

The Startup Societies Foundation is poised to help upset the industry in biggest need of serious change: government.