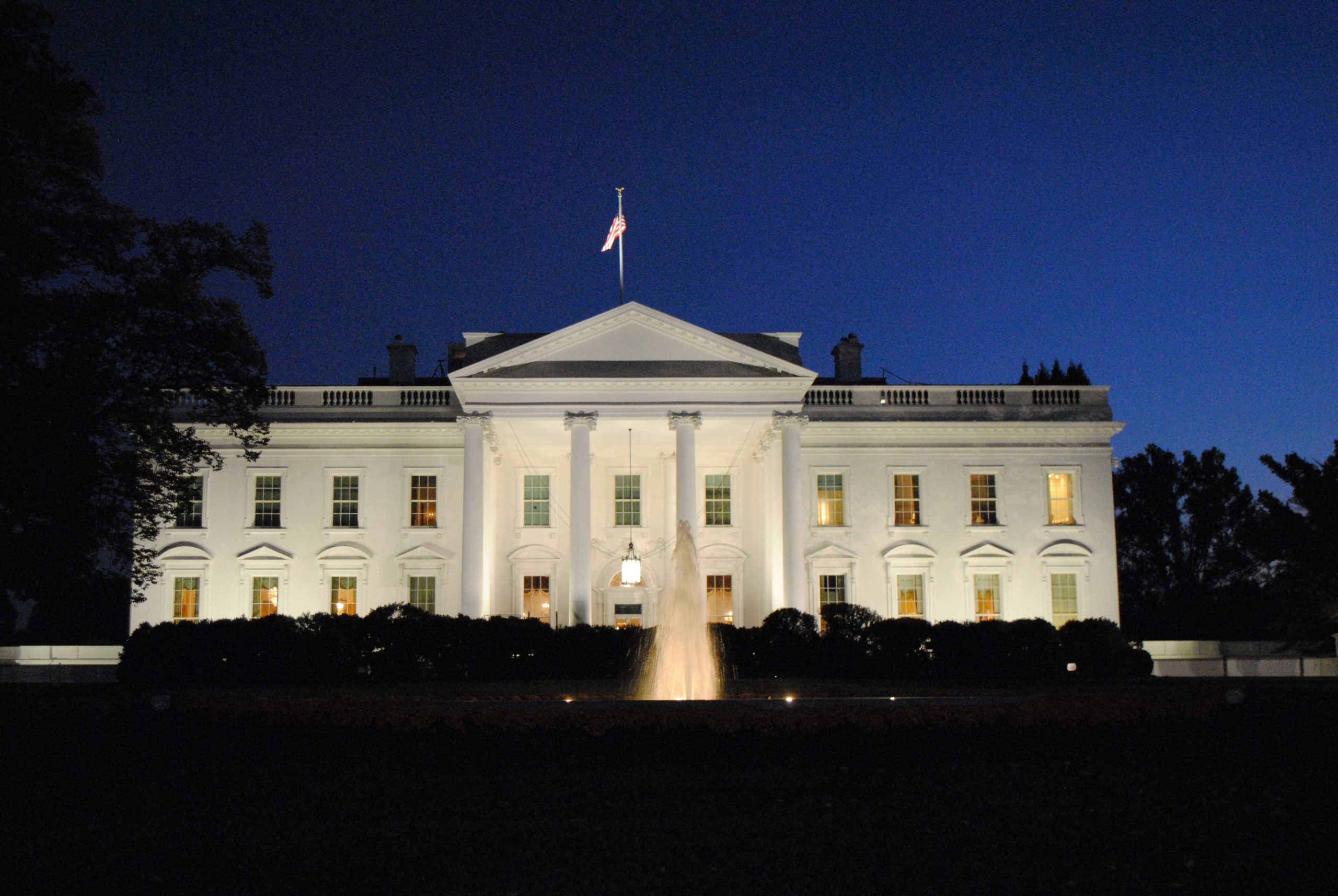 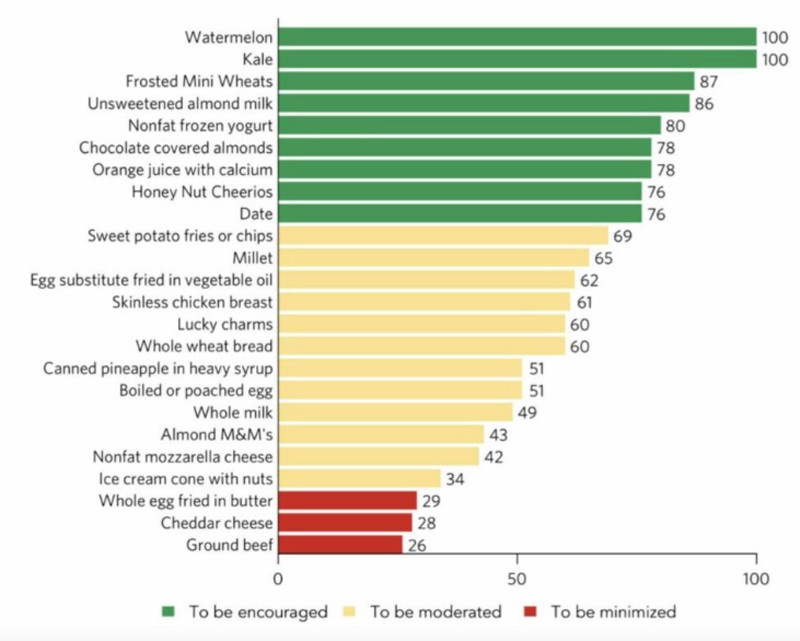 Soak in the idiocy: per the rankings, Honey Nut Cheerios© is a healthy alternative to a boiled egg. Almond M&Ms© is a superior nutritional choice to ground beef.

Then consider that this Food Compass© wasn’t published in some laughable obscure blog in a dark corner of the internet; Dariush somehow managed to get his brazen propaganda piece featured in Nature Journal, widely considered one of the most authoritative scientific publications in the world.

What’s actually in Lucky Charms©, the cereal endorsed by a Tufts University professor? 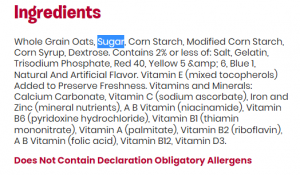 The second most prevalent ingredient is sugar. #5 is GMO corn syrup, which is also essentially sugar, only more inflammatory, obesity-inducing and cancerous than cane sugar. Virtually the entire macronutrient profile is carbohydrates, with very little healthy fat or protein.

The artificial food colorings used include Red 40 and Yellow 5, both of which are contaminated with known carcinogens, and also might cause ADHD and allergies. 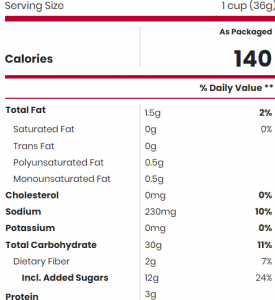 The ingredients list is chock full of other problems that I won’t cover for the sake of brevity. The largest issue, far and away, is the added sugar.

Sugar – especially the synthetic, GMO corn-derived syrupy kind — drives systemic inflammation. In this context of real science, not Social Science©, the phrase “systemic” isn’t postmodern nonsense; it actually means something. In this case, that something is very, very bad news for your health:

The deleterious effects of excessive carbohydrate intake, especially refined carbohydrates like processed sugar, have been well-documented for years.

But the sugar industry, beginning in the 1950s, via the Sugar Research Foundation, paid the priests who practice The Science© to lie to the public for profit:

“The [sugar] industry sponsored a research program in the 1960s and 1970s that successfully cast doubt about the hazards of sucrose while promoting fat as the dietary culprit in [cardiovascular heart disease].”

Remember all those 1990s-era USDA “food pyramid” charts with processed and refined carbs loaded at the bottom and healthy fats second to the top? 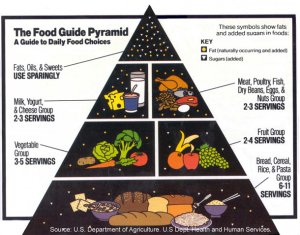 That was 100% corporate propaganda, rubber-stamped by the USDA Experts© in exchange for cash and future board positions at General Mills©.

How many Americans blindly followed The Science©, stuffed their faces with pasta and pastries and Spaghetti-O’s©, and died decades before their time? What was the final death toll for the intentional misleading of the public at their own expense by the Public Health© authorities?

To add insult to injury, the American Diabetes Association© (ADA) ironically recommends that diabetics (who can’t control their blood sugar) get 45% of their calories from carbohydrates that spike blood sugar – a sure one-way ticket to an early grave.

In the meantime, though, speeding along the Autobahn to premature death, the biomedical corporations that fund the ADA© – a long list that includes Merck© and Pfizer© — will extract their gullible patients’/cash cows’ wealth while they expire, slowly and painfully. 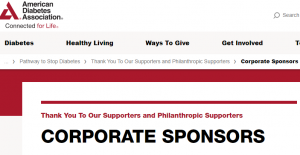 What kind of a “doctor” would advise anyone on planet Earth, in any state of health, for any reason whatsoever, to include Lucky Charms© in their diet in lieu of natural, amino acid-rich chicken?

A cursory examination of Dariush’s career reveals possible explanations (spoiler: none of them include a sincere desire to improve health, except the health of his sponsors’ financial earnings report).

Dariush has advised a trifecta of the most corrupt and dangerous Public Health© bodies on the planet:

(For a baseline idea of how compromised the American Heart Association is, the organization simultaneously a.) recognizes in its own published literature that the Pfizer and Moderna mRNA gene therapy “vaccines” drive inflammation and cause “thrombosis, cardiomyopathy, and other vascular events,” and b.) endorses the vaccines as “safe and effective.”) 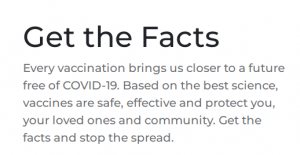 “Never let science get in the way of pharmaceutical profits” – the American Heart Association ethos.

Where did Dariush learn his lies? Maybe it was during his attendance at the Bill & Melinda Gates Foundation Nutrition Team Retreat Learning Session.

Or, perhaps, we can look to Dariush’s funding sources to shed light on why he makes the absurd claims he does. Far from taking his funding from a cooperative of local organic farmers, the patrons who fund Dariush’s academic “work” at Tufts University include:

Beyond exposing his financial sponsors, the proof in the proverbial pudding that Dariush is a negligent psychopath is that a first-grader intuitively understands that Lucky Charms© is poison.

The child craves Lucky Charms© because it satisfies his deeply engrained, evolutionarily necessary lust for sugar-laced caloric density. Corporate agri-giants understand and capitalize on this when they pack their products full of toxic-yet-tasty high fructose corn syrup.

Nevertheless, despite his base instincts, even a child knows that Lucky Charms© is garbage. His superego, underdeveloped though it is, cries out for his Mommy to pry the spoon from his hands and force-feed him salad instead. For his own good.

Unfortunately, our collective Mommy, the US government, harbors a deep-seated hatred for us. Hence the sick joke to put a demonstrable industry hack like Dariush in charge of the upcoming “White House Conference on Hunger, Nutrition, & Health.”

Date final: White House Conference on Hunger, Nutrition, & Health will be on Sep 28. Truly historic- the first WHC in 53 years to focus on food- for the nation to come together with a real plan to end hunger, improve nutrition, reduce diet-related diseases https://t.co/xeIoB8hLiU

Reject The Science©. Grow a garden and raise your own livestock while it’s still legal. Continue to do so after farming is made illegal too. Break immoral laws. Form your own parallel economy and society, free from the predatory Dariushes of the world.