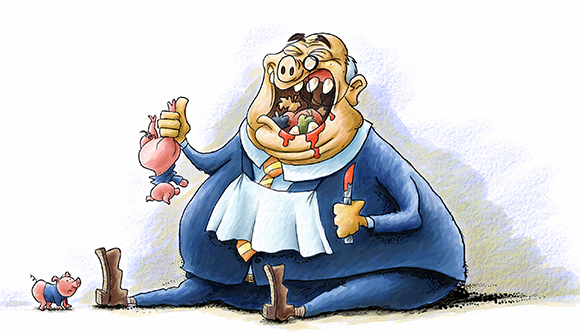 Free-Market Analysis: A conversation was recently leaked in the Irish press that might seem to confirm the worst fears about evil bankers.

In the reports circulating first in the Irish media and now throughout the world, two top bankers are heard on the phone agreeing that the estimate of funds needed to salvage the commercial operations of Anglo Irish Bank were to be estimated at around seven billion euros.

This number was in no way realistic and was merely, as those in conversation affirmed, meant to involve the Irish central bank in an initial bailout.

Once money had been committed to the bailout, more would inevitably follow – and did. This is seen as a tremendously evil act.

But are people missing the point? More on that below.

Here's more from the Guardian article:

Taped phone calls between two senior executives at Anglo Irish have compounded suspicions in the Republic that bankers lured the then Fianna Fáil led government during the crash of September 2008 into a costly financial trap by saving the debtstricken bank with public money.

In the end the Irish taxpayer was forced to hand over €30bn to save Anglo Irish Bank from collapse and resulted in the state going cap in hand to the International Monetary Fund, the European Central Bank and the EU to save the country from national bankruptcy.

The bank's audio recordings – obtained by The Irish Independent – are of conversations between two senior Anglo Irish managers in September 2008, John Bowe and Peter Fitzgerald. Initially the bank had asked Ireland's central Bank for €7bn to prop up its parlous finances following the Irish property crash.

Critics of the bailout have insisted Anglo Irish bank executives always knew that the figure would be far higher – ultimately more than four times higher. On tape Fitzgerald asks Bowe how did he arrive at the figure of €7bn to which the latter replies: "Just as Drummer [the then Anglo Irish Bank CEO David Drumm now in exile and disgrace in Boston] would say, 'picked it out my arse.'"

The conversation also tends to back up the view that Anglo Irish bankers knew that €7bn would never be enough to save the bank but once they had hoodwinked the Dublin government the taxpayer would keep picking up the tab. In their exchange Bowe says: "Yeah, and that number is seven, but the reality is that actually we need more than that. But you know the strategy here is you pull them in, you get them to write a big cheque and they have to keep, they have to have support their money, you know."

Central banks were initially supposed to act as an economic support for the inevitable panics and reversals that overtake markets on a regular basis.

But the whole assumption of central banking is based on the implicit assumptions that markets operate under circumstances of occasional market failure.

When one examines the marketplace dispassionately, one easily sees this is not so. Market failures occur because of the imposition of various regulatory systems that concentrate the financial mechanism in fewer and fewer hands. This inevitably makes the system more brittle, and finally impels collapse.

Those who are running the system then begin to create mechanisms to avert collapse. Chief among these are central banks.

Central banks and the privileges they have of printing money from nothing are developed based on the idea of market failure, which is itself faulty.

The same interests that create the fragile, artificial system of command-and-control regulatory economics have created artificial entities around the world to "stabilize" the system.

People who are indignant over a conspiratorial conversation between two bankers are getting worked up over the wrong thing. They ought to be asking themselves why these bankers had the option of approaching the Bank of Ireland in the first place.

The basic problem is the system, not the use of it.