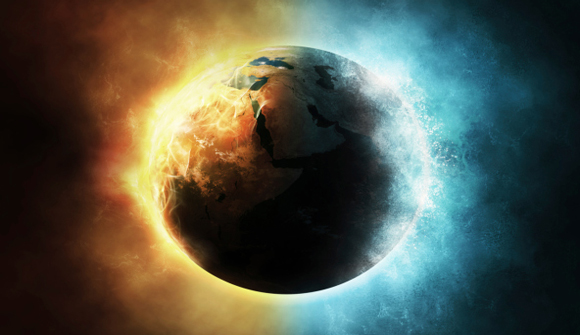 Deflation Stalks the Globe … Crude oil trading at less than $60 a barrel for the first time in five years means lower gasoline prices and more money in consumer's pockets, right? And the knock-on effect of driving down consumer prices is great for everyone, correct? And the global economy needs all the help it can get as it drags itself out of recession, so what's not to love about lower inflation? Plenty of people are alarmed by the prospect of deflation, which can snuff out growth by making consumers reluctant to spend and companies unwilling to invest. Many of them work at the world's central banks. Most of their opponents subscribe to the Austrian school of economics, which is allergic to central banks' manipulating markets and asset values, and embraces the current trend. Next year may prove which view is correct. – Bloomberg

Dominant Social Theme: This deflation is bad, man. And it's coming … Feel the fear!

Free-Market Analysis: Think of inflation as fire and deflation as ice. How will this latest asset reflation end? Will it subside into ice – a tremendous monetary and price deflation? Or will the current asset expansion continue into a catastrophe of fire?

Often, as we've pointed out, the two look the same. When deflation appears after an enormous bubble, people claim that there is a deflationary mechanism at work in collapsing the market.

But in fact, the price and monetary deflation or disinflation is a product of asset INFLATION. It is inflation that does the damage, not deflation.

We are revisiting this meme for a third time in a recent span because the "fear deflation" meme is expanding rapidly. Now it's gone global! And Bloomberg is pounding it again.

But first, let's be clear right away on the modern definition of deflation. Deflation only comes in one color so far as the mainstream media is concerned: Deflation means price deflation, a subsidence of prices.

There is another form of deflation, of course, not used so often within a mainstream media context, which is monetary deflation. Disinflation can be a reduction in rate of price inflation or monetary inflation.

Here's more from this article:

The Trouble With Falling Prices … The euro region looks to be most at risk of sliding into deflation early next year. Consumer prices rose just 0.3 percent in November, a far cry from the European Central Bank's 2 percent target. And the ECB's preferred measure of where the collective intelligence of financial market participants says inflation is headed — the five-year rate on inflation swaps in five years' time — heads lower all the time …

Deflation prospects are also evident in the world's government bond markets. In the U.S. Treasury market, dealers have dissected the securities into so-called STRIPS — Separately Traded Interest and Principal Securities — at a pace that's swollen the market to $211 billion, its biggest since 1999. Strips, which lose value quicker than just about anything else if inflation accelerates, have instead posted returns approaching 50 percent this year, Susanne Walker reported for Bloomberg News this week. U.S. bondholders are so relaxed about inflation that they're almost horizontal.

And in Germany, investors are paying for the privilege of stashing their cash in government debt — another sign that they don't expect inflation to erode the value of their returns … Some countries are already in deflation. In Sweden, consumer prices dropped for a fourth consecutive month in November, prompting the central bank yesterday to commit to keeping its main interest rate at zero until the second half of 2016. Spain, which is at the mercy of the ECB's policies, has seen deflation for the last five months, with prices dropping by 0.4 percent in November.

Even in the U.K., where the economic recovery is relatively robust, figures yesterday showed inflation at its slowest in more than a decade, with November consumer prices rising just 1 percent. That helped drive the yield on 30-year gilts to a record low yesterday.

Do you feel the fear? We don't believe these phony deflation or disinflation price measurements. They are coming from the same people who brought us economic "green shoots" three years ago and are still proclaiming a magic recovery that so far cannot be found.

It is not deflation that haunts the globe. It is more likely stagflation from central bank money printing. That's what central banks do, after all. That's almost all they do. They debase the currency while shouting loudly that they are protecting it.

Now the proverbial ante has been "upped." No longer is Draghi shouting about EU price deflation. Bloomberg wants us to know that the entire GLOBE is to be gripped by this plague of collapsing prices.

From our point of view (and Murray Rothbard's), a little bit of deflation is a good thing. But not for the modern central banking crowd. They are obviously intent on inflating the hell out of this economy.

And this is one more reason why we often return to the "Wall Street Party" meme. We see no flagging in the intention of these "good, gray men" to turn off the money spigot. They want stock markets to inflate, prices to inflate and asset bubbles to inflate.

From a VESTS standpoint, one has to decide if those determined to inflate are going to be able to pull it off. Your investment patterns will be different in an environment of price inflation versus price deflation.

But we can feel the meme expanding. Bloomberg is even using the downward manipulation of the oil market to build a case for deflation in this article. What opportunism!

The good, gray bankers want inflation in the worst way and are beginning to shout in chorus. All the more reason not to believe it?

Some say the world will end in fire,

Some say in ice.

From what I've tasted of desire

I hold with those who favor fire.

But if it had to perish twice,

I think I know enough of hate

To say that for destruction ice