STAFF NEWS & ANALYSIS
Would You Quit Your Job to Build a School in Nepal?
By Michael Demas - June 02, 2017

After a nerve-racking, jam-packed five-hour bus ride on a careening mountain road in the Nepalese countryside, I was seriously doubting my life choices. I had quit my job, moved my stuff back home with Mom and Dad, budgeted my modest savings for the next five months, and now I was in the middle of a remote town by a river with an over-stuffed backpack.

It had all started with an application to help rebuild a school in Nepal that had been destroyed by the 2015 earthquake.

And now I was finding my way an hour up the road, across a suspension bridge, and on top of a farming terrace, where I discovered an international coalition of kind-hearted volunteers taking part in a ceremony. The village of Nagpuje was celebrating the anniversary of its school. I looked around and saw temporary learning centers and CGI structures. I was moved by the celebration, but it also struck me that this was the entire extent of the village’s development.

In the coming days, I would wake early, labor all day with my soon-to-be-family, and settle by the fire with a warm cup of tea, reflecting on our day’s work. We moved rocks, dirt, and cement, all of the necessary simple tasks. We soon learned and started trying our hand at carpentry, bending and cutting rebar, and manually mixing concrete. The project was lead by engineers, both domestic and foreign, who employed local masons from the village in which we were staying. It was clear that there was an efficient plan with effective measures; and I had the privilege of helping.

The Internet is inundated with charitable causes to which you can donate. And while a donation is admirable, there is a slight visceral shortcoming in the satisfaction of helping. For some, a monthly subscription to a charity works. For others, myself included, there is a need to go somewhere and help in order to know for certain the effects of my individual contribution.

When you research different types of international volunteer organizations, two things become apparent. In order to be involved, you either need a specific skill or vocation, such as nursing or engineering, or you can pay money to be a part of a program.

I was discouraged. I was just a guy in his mid-20s with a film degree (read: broke) and arguably no valuable skills. But then I discovered All Hands Volunteers – a non-governmental organization specifically to do with natural disaster response and recovery; everything from tsunamis to earthquakes, and much more.

When their founder David Campbell created this organization, he had one simple goal: No matter the qualification or skill set, find average people who have a desire to make a difference in the world. All Hands Volunteers runs on grants, partnerships, and donations. They don’t charge incoming volunteers to participate. All they ask is that you set up a personal fundraising page. You work 6 days a week, and in return, All Hands provides you with:

– Room and board (meals provided 6 days, meal options always near).

– Authentic cultural experiences (even and especially in state-side projects).

Generally speaking, it makes sense to charge incoming volunteers, especially if they’re spontaneous. It takes money to keep people fed, continue work on the project, make sure facilities are kept up, etc. But despite the cold hard logistics of this business model, All Hands breaks the mold. They instead rely on the raw power of human generosity.

Were it not for a steady stream of donations, this NGO might not have a place in the world. Behind each carefully selected mode of operation, there is a reliance on the decency of the average person. Not to mention, this past year All Hands spent over 84% of its budget directly on its programs, with administrative costs just under 8%. You can view their financials here.

So I decided to apply.

Soon I was leading teams of people in the day’s work, directing workflow and working in tandem with Nepali masons. We hardly shared a language, but through working together, we came to know our shared responsibilities, and how to help each other accomplish our goal: to build a school that could withstand an earthquake.

With each passing day, I became a little closer to the local community. From the shopkeepers to the farmers, to the children who would pass by our worksite every day, waving and shouting “Namaste!” at the top of their lungs. Little did they know that they were providing a boon of motivation of a spiritual scope. Whenever we got sore, or tired, or when manually mixing concrete in the hot midday heat became too difficult; whenever we felt our strength waning with the setting sun, there they were, doing nothing other than just being kids. That was always enough.

As much as I grew to understand Nepali culture in an authentic way, I also learned so much about the world through other international volunteers. I’ve worked with people whose religious and political views are diametrically opposed to my own. We were able to learn from each other, entertain debates both serious and capricious, and learn about each other’s cultures. They were engineers, yoga teachers, travelers, students, and business owners. They were young, old, experienced, wide-eyed and determined. They were, and are, truly brilliant. 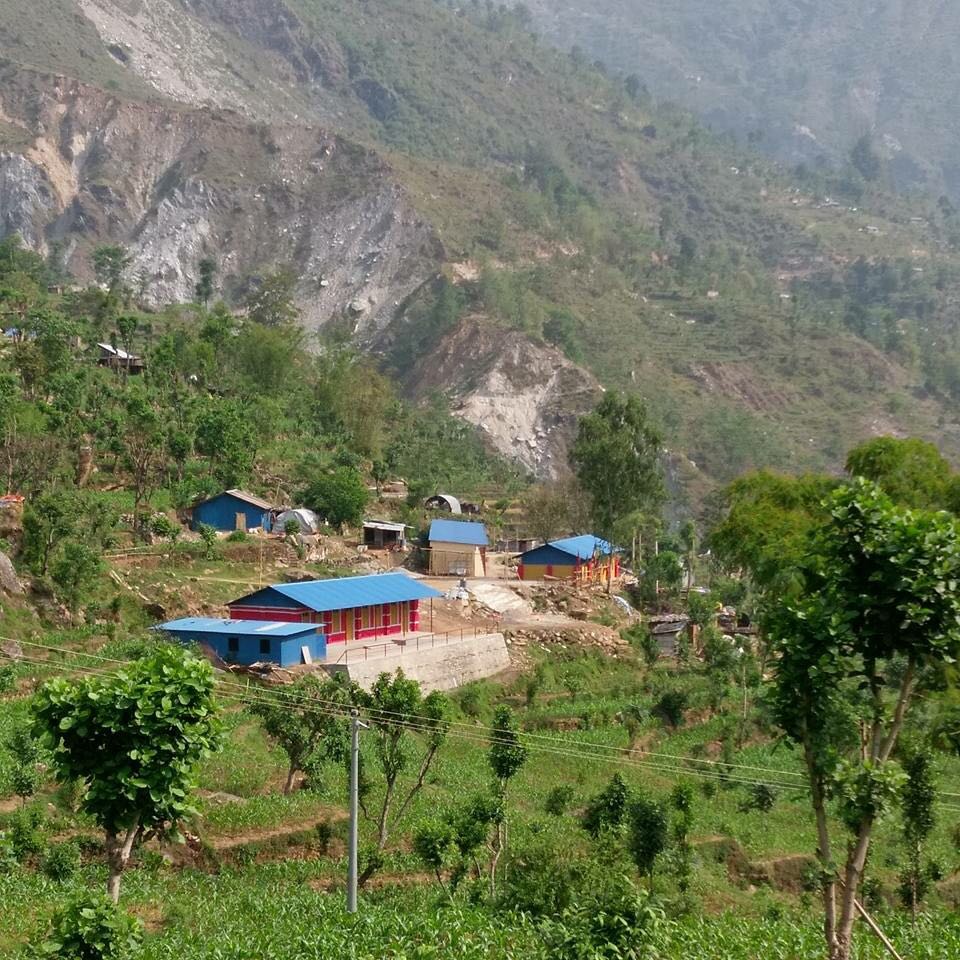 Our mission in Nagpuje, Sindhupalchowk is complete. We built two schoolhouses, a functioning bathroom, a DIY no-budget playground, and a community water tap, complete with a partition wall so women can bathe in privacy. Our goals were made manifest by the strangest group of misfits we’d ever have the pleasure of being a part.

In Nepal, it’s common to refer to everyone by a family name. Everyone is either a sister or brother, father or mother, aunt or uncle. It was this passive reinforcement that these relationships became real for me. Even though our hearts soared seeing these massive structures we built with our own bare hands, we were sad. We knew we had to leave, that’s just the nature of it.

After bidding farewell to many a volunteer, it was finally our turn. We celebrated a final night with many families in the village. We ate, sang, danced, drank, played with the kids late into the night. The following day was surreal for everyone. Our base was deconstructed. The villagers had to get used to our absence just as they got used to our presence.

But as we walked down the mountain, we could see from the far end of the path a bright, beautiful school. No matter where the road lay ahead of us, we all knew precisely what we left behind. Through nothing other than our own determination and willingness to help, we made lives measurably better. The feeling of accomplishment was so rewarding; the finest thing for which to live.

The results are fascinating. This organization attracts people from all around the world who fulfill a singular goal with a team of people. Not for pay, but for the intangible value that comes with making a genuine difference. Volunteering is only the illusion of selfless activity; the volunteer ends up receiving not just a broadened perspective, but also a changed life. In giving freely, you can reach out and hold a universal purpose: to aid the safety, growth, and development of the human race.

It’s very easy to be cynical in a 24-hour media cycle, where we are barraged by the conflict and turmoil at home and abroad. It’s even easier to make a positive change as an individual. It’s legitimately at our fingertips. If you are curious about doing something like this for yourself: this is your invitation.

The world is waiting to become a better place thanks to you.