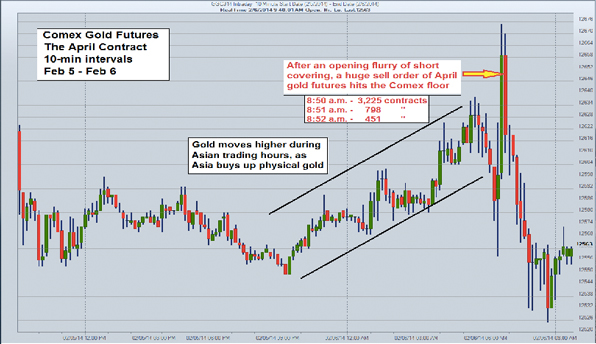 In two recent articles we explained the hows and whys of gold price manipulation. The manipulations are becoming more and more blatant. On February 6 the prices of gold and stock market futures were simultaneously manipulated.

On several recent occasions gold has attempted to push through the $1,270 per ounce price. If the gold price rises beyond this level, it would trigger a flood of short-covering by the hedge funds who are "piggy-backing" on the bullion banks' manipulation of gold. The purchases by the hedge funds in order to cover their short positions would drive the gold price higher.

With pressure being exerted by tight supplies of physical gold bars available for delivery to China, the Fed is growing more desperate to keep a lid on the price of gold. The recent large decline in the stock market threatened the Fed's policy of taking pressure off the dollar by cutting back bond purchases and reducing the amount of debt monetization.

Thursday, February 6, provided a clear picture of how the Fed protects its policy by manipulating the gold and stock markets. Gold started to move higher the night before as the Asian markets opened for trading. Gold rose steadily from $1254 up to a high of $1267 per ounce right after the Comex opened (8:20 a.m. NY time). The spike up at the open of the Comex reflected a rush of short-covering, and the stock market futures looked like they were about to turn negative on the day. However, starting at 8:50 a.m., here's what happened with Comex futures and S&P 500 stock futures (click on chart to enlarge):

At 8:50 a.m. NY time (the graph time-scale is Denver time), 3,225 contracts hit the Comex floor. During the course of the previous 14 hours and 50 minutes of trading, about 76,000 total April contracts had traded (Globex computer system + Comex floor), less than an average of 85 contracts per minute. The 3,225 futures contracts sold in one minute caused a $15 dollar decline in the price of gold. At the same time, the stock market futures mysteriously spiked higher (click on chart to enlarge): 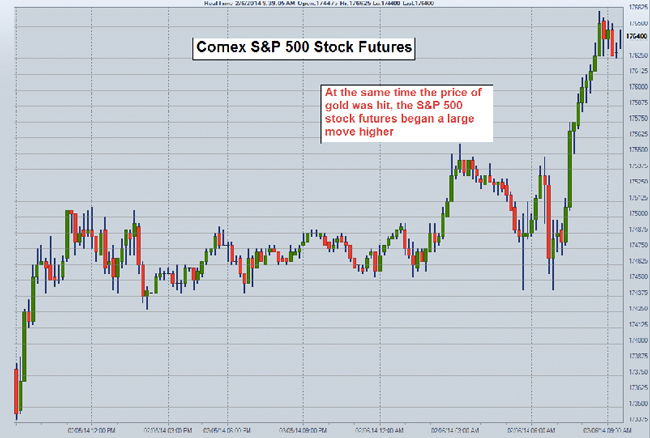 As you can see from the graphs, gold was forced lower while the stock market futures were forced higher. There was no apparent news or market events that would have triggered this type of reaction in either the gold or stock market. If anything, the trade deficit report, which showed a higher than expected trade deficit for December, should have been mildly bullish for gold and bearish for the stock market. Furthermore, at the same time that gold was being forced lower on the Comex, the U.S. dollar index experienced a sharp drop in price and traded below the 81 level of support. The fall in the dollar is normally bullish for gold.

The economy is getting weaker. Fed policy is obviously failing despite recent official pronouncements that the economy is improving and that Bernanke's monetary policies succeeded. A just published study by Jing Cynthia Wu and Fan Dora Zia concludes that the the positive impact of the Federal Reserve's policy of quantitative easing is so slight as to be insignificant. The multi-trillion dollar expansion in the Federal Reserve's balance sheet lowered the unemployment rate by little more than two-tenths of one percent, raised the industrial production index by 2 percent, and brought about a mere 34,000 housing starts. (http://econweb.ucsd.edu/~faxia/pdfs/JMP.pdf)

The renewal of the battle over the debt ceiling limit is bullish for gold and bearish for stocks. However, with the ongoing manipulation of the gold price and stock averages via gold and stock market futures, the normal workings of markets that establish true values are disrupted.

A rising problem for the manipulators is that the West is running low on gold available for delivery to China and other Asian buyers. In January China took delivery of a record amount of gold. China has been closed since last Friday in observance of the Chinese New Year. As China resumes purchases, default on delivery moves closer.

One way for the Fed and bullion banks to hold off defaulting on Chinese purchases is to coerce holders of gold futures contracts to settle in cash, not in delivery of gold, by driving down the price during heavy Comex delivery periods. This is what likely occurred on Feb. 6 in addition to the Fed's routine price maintenance of gold.

As of Thurday's (Feb. 6) Comex report for Wednesday's (Feb. 5) close, there were about 616,000 ounces of gold available to be delivered from Comex vaults for February contracts totaling slightly more than 400,000 ounces, of which delivery notices for 100,000 ounces were given last Wednesday night. If the holders of the other 300,000 contracts opt to take delivery instead of cash settlement, February contracts would absorb two-thirds of Comex gold available for delivery.

The Comex gold inventory has been a big source of gold shipments from the West to the East, resulting in a decline of the Comex gold inventory by over 4 million ounces – 113 tonnes – during the course of 2013. We know from reports from Swiss bar refiners that the 100 ounce Comex gold bars are being received by these refiners and recast into the kilo bars that the Chinese prefer and shipped to Hong Kong. With the amount of physical gold in Comex vaults rapidly being removed, the Fed/bullion banks use market ambush tactics such as those we describe above to augment and conserve the supply of gold available for delivery.

Readers have asked if gold can continue to be shorted on the Comex once no gold is left for delivery. From what we have seen – the fixing of the LIBOR rate, the London gold price, foreign exchange rates, the price of bonds and the manipulation of gold and stock market futures prices – we don't know what the limit is to the ability of the Fed, the Treasury, the Plunge Protection Team, the Exchange Stabilization Fund, and the banks to manipulate the markets.

Coauthor of this column Dave Kranzler traded high yield bonds for Bankers Trust for a decade. As a co-founder and principal of Golden Returns Capital LLC, he manages the Precious Metals Opportunity Fund.