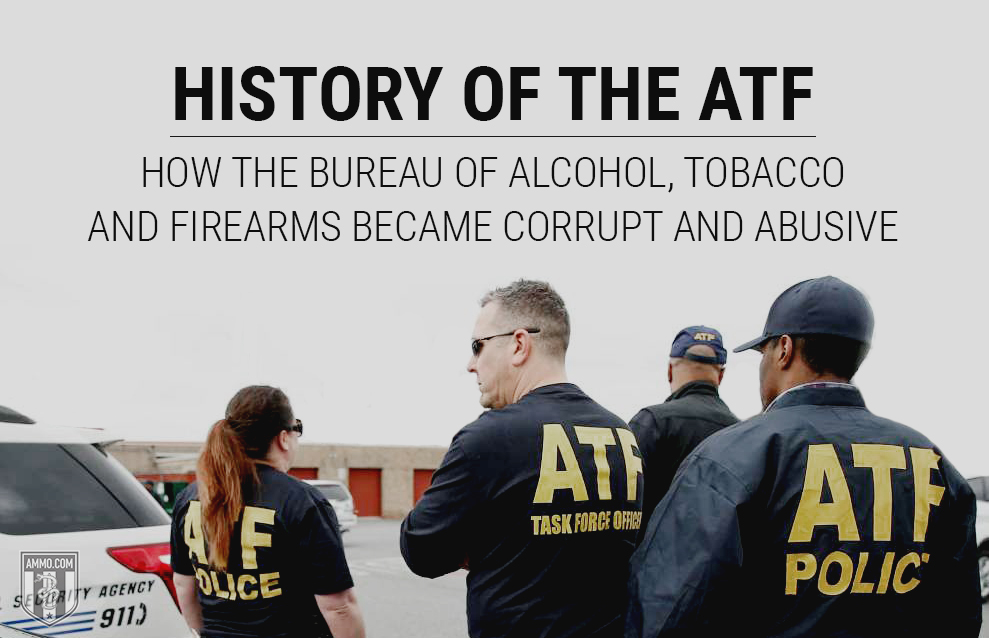 It’s unlikely that there is a single federal alphabet organization less popular among the readership of this website than the Bureau of Alcohol, Tobacco and Firearms. These are the people who gave us both the Siege at Ruby Ridge and the Siege of Waco. What’s more, they may well be engaged in an entirely unconstitutional exercise: monitoring and patrolling the gun ownership of law-abiding citizens.

There’s also a solid case to be made that the ATF is a rogue organization, the most corrupt of the federal alphabet agencies. This can be seen through a number of scandals beginning with Ruby Ridge, threading through the siege at Mount Carmel in Waco, and continuing to the notorious “Fast and Furious” scandal.

While firearms owners, weapons enthusiasts and Second Amendment advocates might have a special bone to pick with the ATF, we believe that all freedom-loving Americans should be concerned about the overreach, lawlessness and lack of accountability in this organization. Roman poet Juvenal once posed an important (and famous) question about powerful justice officers: “Quis custodiet ipsos custodies?” – Who is to guard the guardians?

All told, there are over 20,000 firearms laws and regulations on the books at the state and federal level. Many of these contradict each other or are written with a lot of room for interpretation. Gun owners and gun dealers are easy prey for a corrupt and lawless federal agency that wants to twist its arms outside the bounds of the law.

It’s also worth considering what overreach and lack of accountability other federal organizations are responsible for that we don’t know about, simply because they do not have the same spotlight on them as the ATF – a reminder that the scandals mentioned above are just the ones that we know about.

We recommend reading this article in concert with our other articles on the ATF: Waco, Ruby Ridge and Fast and Furious. Each of these contains familiar tropes with regard to the ATF: Entrapment, “lost” evidence, a total lack of accountability, aggressive policing tactics where discretion would probably have saved lives, and a vengeful manner of doing business.

The Pre-History of the Bureau of Alcohol, Tobacco and Firearms

In December 1933, Prohibition was repealed and the Prohibition Bureau became the Alcohol Tax Unit (ATU) of the Bureau of Internal Revenue. In 1942, they were also tasked with enforcing federal firearms laws, which were scant at the time to say the least – remember that fully automatic machine guns were legal until 1986.

In the early 1950s, the Bureau of Internal Revenue became the Internal Revenue Service that we all know and love today. As part of this reorganization of federal alphabet agencies, the Alcohol Tax Unit was tasked with collecting tobacco taxes as well, and became known as the Alcohol and Tobacco Tax Division (ATTD).

It was with the 1968 Gun Control Act that the agency became the Alcohol, Tobacco, and Firearms Division of the IRS, and also received some jurisdiction over bombings and arson. In 1972, it became a fully independent bureau of the Treasury Department – the Bureau of Alcohol, Tobacco and Firearms (B.A.T.F). It was here that the Bureau became tasked more with enforcement of the law around firearms than it did about collecting taxes on tobacco and alcohol.

A Long History of Abuse and Corruption in the ATF

The ATF had a bad reputation long before the events of Ruby Ridge and Waco. They were subject to Congressional hearings in the late 70s and early 80s, because their methods for securing a case were considered overzealous. Evidence at the hearings was presented by American citizens who had been charged, experts who had closely studied the Bureau, and internal officials from the Bureau. The Senate sub-committee investigating declared:

“Based upon these hearings, it is apparent that ATF enforcement tactics made possible by current federal firearms laws are constitutionally, legally, and practically reprehensible.”

The ATF was considered especially harmful because they often targeted people who not only didn’t know they were doing anything wrong, but had absolutely no malicious intent at all. Their efforts focused on gun collectors rather than stopping street crime. Indeed, the same investigation found that 75 percent of all ATF prosecutions were targeted at people who had no knowledge that they were breaking the law and had no intent to do anything criminal.

The Firearms Owners Protection Act of 1986 (FOPA) was squarely aimed at reducing the abuses of the Bureau. Nothing less than a complete overhaul of the 1968 Gun Control Act, FOPA allowed for increased interstate sales of long arms, shipping ammunition through the U.S. mail, ended record keeping requirements on most forms of ammunition, and protected the transportation of otherwise illegal firearms across state lines (“safe passage”).

This is also the act that largely prohibited the ownership of fully automatic machine guns by civilians, so it certainly wasn’t perfect.

Following FOPA in 1986, the next big chapters in ATF history are the sieges at Ruby Ridge in 1992 and Waco in 1993. These events lead directly to the bombing of the federal building in Oklahoma City in 1995.

The Siege at Ruby Ridge

In 1992, Ruby Ridge, Idaho, was the site of an 11-day standoff between the ATF and Randy Weaver – who had been entrapped by the ATF into violating the law regarding the barrel length of a shotgun. They attempted to coerce him into becoming a snitch inside the Aryan Nations (which, as it turned out, was basically an organization entirely full of snitches). When he refused, the ATF moved forward with prosecution.

There was a series of bureaucratic SNAFUs that led to Weaver not knowing what his court date was, missing it, and then deciding not to show up at all out of the very legitimate fear that he would not get a fair shake. So the Marshal Service came in, guns blazing in tactical gear, and did what the feds are perhaps best known for: They shot Weaver’s dog. Unfortunately, it went further than that. They also shot his 14-year-old son Sammy in the back and his wife through a door while she held their infant child.

Patriots descended onto the scene and 11 days later, Weaver came out. He was tried and acquitted of all charges except for failure to appear.

The Siege at Waco

The next year, the ATF had a similar situation in Waco, Texas, where they were investigating a religious group known as the Branch Davidians. Here, the ATF (according to many accounts) was more interested in performing for television cameras than they were in enforcing the law. They used aggressive policing tactics against a group of people who had not been convicted of – or even formally charged with – any crime. The final result was a 51-day siege, at the end of which 82 Branch Davidians (including women and children) were gunned down or burned to death.

Each of these events were directly cited by Timothy McVeigh as radicalizing for him on his road to attacking the federal building at Oklahoma City, stating:

“I chose to bomb a federal building because such an action served more purposes than other options. Foremost the bombing was a retaliatory strike; a counter attack for the cumulative raids (and subsequent violence and damage) that federal agents had participated in over the preceding years (including, but not limited to, Waco). From the formation of such units as the FBI’s Hostage Rescue and other assault teams amongst federal agencies during the 80s, culminating in the Waco incident, federal actions grew increasingly militaristic and violent, to the point where at Waco, our government – like the Chinese – was deploying tanks against its own citizens.”

Continue reading History of the ATF: How the Bureau of Alcohol, Tobacco & Firearms Became Corrupt & Abusive at Ammo.com.