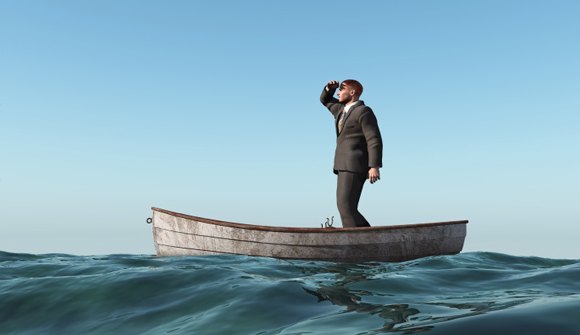 Factional conflicts have the power to destroy empires – and republics … Bitter fights in Washington are making the US economy look much worse than it is. The US Founding Fathers abhorred factions. The 10th Federalist Paper by James Madison in 1787 is a study of how to defend the fledgling republic against the dangers of organised zealotry, the curse that blighted earlier republics in world history … This latest episode fills me with foreboding, perhaps because I have just been reading John Julius Norwich's History of Byzantium. It was internecine squabbling that caused Christian Byzantium to lose the terrible battle of Manzikert in 1071, the moment when power passed so carelessly to the Seljuck Turks and the rising force of Islam. – UK Telegraph/Evans-Pritchard

Dominant Social Theme: Why can't we all just get along?

Free-Market Analysis: Every now and then top journo Ambrose Evans-Pritchard just loses the "plot" and this is one of those times.

Evans-Pritchard is worried that factionalism between Democrats and Republicans will cause the End of Empire. Specifically, the US empire. But this is a misreading of what is going on.

The Republicans and Democrats appear to have split, acrimoniously. However, what is driving the split is the Tea Party. The Tea-Party movement in the US is amorphous. As we predicted, the political elites have not been able to tame it, though they have tried.

Evans-Pritchard believes that factionalism has run amuck in the US. But it is freedom and free-market concepts that are making the difference.

Let Evans-Pritchard speak for himself. See if you agree:

Madison defined factions as groups of citizen "united and actuated by some common impulse of passion, or of interest, adverse to the rights of other citizens, or to the permanent and aggregate interests of the community".

The bone of contention was thought to be disputes over the "unequal distribution of property", and so it has proved to be as we see today in the bitter fight between debtors and creditors, or between those who live off government and those who pay for it.

Madison believed a powerful continental Congress – rooted in Washington rather than state legislatures – would work against factions. Regional diversity would muddy the ideological waters. This is in fact what happened.

For much of the 20th Century the Democratic Party was a coalition of blacks, Jews, and Irish, Italian, and Polish Catholic immigrants in the North, and "Bol Weevil" conservatives in the South. They had little in common. This allowed for fluid political deals on Capitol Hill, with alliances crossing party lines. Gridlock was mostly avoided even though the US constitution fosters divided government.

The numbers of voters who split their tickets fell to 11pc in the 2012 elections, an all-time low. A record number identify themselves as hard-core Democrats or Republicans, and they are more concentrated in their bastions.

"Republican districts are redder than ever: Democrat districts are bluer. Ideological polarisation in the House is wider than it has ever been," said the Washington Post.

… Since tax revenues cover just two thirds of federal spending and debt service costs between October 17 and the end of the year, such a policy would imply fiscal contraction of roughly 7pc of GDP (annualised).

This is music to the ears of Tea Party hard-liners. The Leviathan state would be "disfunded" at a stroke, the dream come true. The plan is all too feasible, and insidiously incremental, and here lies the real danger lies for the US economy and the world.

Any such action – with monetary policy nearing exhaustion – would push America back into recession. By the time it was clear how much damage had been done, it would be too late.

There are two main points here where we think Evans-Pritchard goes wrong. First, despite any polls and other evidence, the US is not broadly factionalized. The factionalism resides in Washington, and it's an evolutionary factionalism, partaking of what's going on with the larger public.

This is replicated elsewhere. Britain is beginning to verge on what they used to call "classical liberalism" (libertarian) thanks to UKIP. Can the rest of Europe be far behind?

Not so long ago, US, libertarian/conservative Congressman Ron Paul was nearly poised to win the Republican nomination. The Party did everything it could to deny him the prize – via violence, dirty tricks and vote-rigging – not that Paul was actually so enthusiastic anyway.

Paul had a vision that his son would run and win. Rand Paul is a former eye doctor and his father was the Congress's most famous crank, though most had not heard of him. Now, these two have the party virtually by the throat.

Romney has receded – as he was merely a party hack – and probably something like 50 million US citizens continue to share some of Ron Paul's beliefs. This is the reason his son is poised to be a serious contender as a potential GOP candidate for president in a few years time.

That's an astounding statement, but if US citizens, like British citizens, were asked to respond to a survey promoting smaller and less militant government, what do you think the results would be? How many people do YOU know that want bigger government and larger wars?

The difference between this century and the last one is that the message of freedom, free markets and money competition has reached literally hundreds of millions in the West and the East, too, thanks to the Internet. What we call the Internet Reformation is sweeping the world. And this is what Evans-Pritchard is missing. The US mainstream media breathes not a word of it, either. It's the "gorilla" in the room.

Mainstream pundits commenting on the current DC gridlock claim that what is going on is an aberration. This is the "high point" of the Tea Party movement. After this government shutdown turns into a disaster, the Tea Party will finally subside.

Business as usual – run by practical pols – will return. Do you believe it?

Second, Evans-Pritchard is worried about the US sinking back into a recession. But what's his idea of a recovery? GM churning out thousands of electric cars; the Midwest dotted with dysfunctional windmills; Wall Street riding another housing boom into a horizon of disaster?

The US economy is dysfunctional. It has been purposefully hollowed out by taxes, money printing and endlessly destructive regulations. Sure, like a patient with a bad heart, the US economy can be shocked back to life for a while through medication with endless gouts of paper money. But that's a false cure. Eventually the US economy is going to collapse once more. There's nothing much left of it.

Congressional elites are not REALLY factionalized. They're reflective of a larger change. The top elites are no doubt aware of this … finally. The gridlock affecting Washington will likely pass for the moment but is symptomatic of a larger shift that cannot be staved off forever.

There is going to be one last spasm – one last Wall Street party – while our controllers are busy battening down the hatches and preparing for the worst. The acknowledged difficulty with tapering, the dysfunction of the EU, the gradual economic collapse of Asia all point to a negative economic outcome within the context of the larger business cycle.

Keep your eye on the more distant horizon. There will be plenty of opportunities in the short term as "they" open up the spigots once again. But in the long term, this business cycle WILL turn. Eventually, gold will jump and the power elite will make a play for a more globalized economy. Unlike Evans-Pritchard, they will not be under any illusion about elite factionalism.