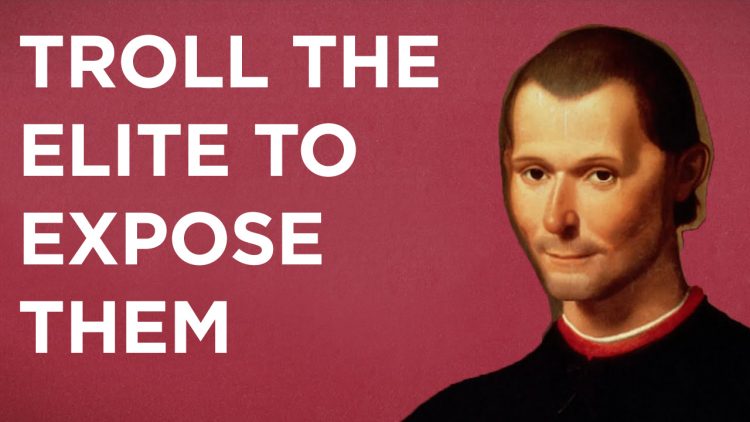 STAFF NEWS & ANALYSIS, Videos
How Machiavelli Trolled the Elite with “The Prince”
By Joe Jarvis - July 31, 2021

The Prince was not real advice.

When he wrote The Prince in 1513, Niccolò Machiavelli dedicated it to Lorenzo de’ Medici, the ruler of Florence. The typical story goes that The Prince was supposed to be a job application from an out of work diplomat– Machiavelli had worked as an emissary for Princes, and treated with Popes and Kings.

But Machiavelli was imprisoned and tortured when the Medici came back to power, accused of plotting against them. He was released as part of a general amnesty when Giovanni de’Medici became Pope Leo X.

Then Machiavelli began working on The Prince at his country home, out of power, out of work, fearing poverty and death. He was probably pissed off, and a little bit crazy, from the torture and turn of his fortunes.

So he wrote The Prince, as brutal, honest advice on how to stay in power and dedicated it to the rulers of Florence.

And it is true that much of his advice, if followed by the rulers, would keep them in power. But did the Medici really need Machiavelli to tell them this? The lessons were likely obvious to them.

But the general public may have been unaware of the elites’ power tactics. Machiavelli was informing the public how rulers operate in political games.

But he couldn’t simply come out and criticize the powerful directly. He had to pretend it was well-meaning advice, and praise the rulers– how smart you are for using this brutal tactic to oppress the people and maintain power.

At other points, The Prince gave the rulers advice that was sure to lead to their self destruction.

According to Erica Benner in her book, Be Like The Fox, Cardinal Reginald Pole was the first to see this, after witnessing Oliver Cromwell destroy England by adhering to The Prince’s advice.

“Mark this well, rulers,” Pole warned; beware of this two-faced writer. “For it is the aim of his doctrine to act like a drug that causes princes to go mad,” making them attack their own people with “the savagery of the lion and the wiles of the fox.”

Pole concluded that Machiavelli’s aim “was to write for a tyrant those things that are pleasing to tyrants, bringing about in this way, if he could, the tyrant’s self-willed and swift downfall.”

The advice to be brutal, conniving, and treacherous is what we typically associate with Machiavelli.

And then, almost as an aside, he would give the truth– “victories are never so clear that the winner does not have to have some respect, especially for justice.”

For all his talk about it being better to be feared than loved, at one point, Machiavelli says that literally all it takes to keep a people from revolting is to not rob them blind and rape the women.

But do you think that line was meant for the rulers? Or do you think it was meant to rouse the anger of the people. “That’s right! Is that so much to ask? And still these sick rulers abuse us at every turn!”

Machiavelli had given years of loyal service as an emissary of the elite, and was cast out, fired, and abandoned. He had debts. He had a sick family. He was pissed.

So he wrote The Prince to troll the elite. To expose their power tactics to the people. To criticize them and disguise it as praise. And with any luck, to lead the gullible tyrants into a trap that would destroy them.

Towards the end of his life, Machiavelli said in a letter to a friend, “For a long time I have not said what I believed, nor do I ever believe what I say, and if indeed sometimes I do happen to tell the truth, I hide it among so many lies that it is hard to find.”

With this one sentence, we can say with confidence that trolling predates the internet by 500 years at least.

The Prince was never published in Machiavelli’s lifetime. It was circulated among friends of Machiavelli who surely had a hearty laugh at the dark humor.

But with the internet, it is easier than ever to troll successfully.

For example, Project Veritas made a video (2:29)where pro-gun people posed as anti-gun activists, and asked left wing journalists and politicians if they would post a sign in their front yard that said, “This Home is Proudly Gun Free”.

One target was a journalist who worked for a paper that had just published the names and addresses of everyone in the area with a gun permit, in an effort to shame and intimidate them.

When they asked him to place the sign in his front yard, he responded, “I agree with you, and I’m on your side with this, but I’m just wondering if that’s not an invitation to somebody with a gun!”

What a brilliant insight! But good luck getting a guy like this to speak those words without doing some solid under-cover trolling.

Another example: this “okay” sign is now supposedly a symbol of white power.

For hundreds of years it has meant, “all good” or “okay” but users on the internet message board 4chan successfully convinced the public, as a joke, that the hand gesture was a white power symbol.

Things like that convince the idiots to take more and more ridiculous positions until their ideology is a walking joke that repulses normal people.

Much of the Twitter mob you see online attacking and cancelling people for saying things like, “I believe in judging people on merit, and not the color of their skin,” are almost certainly Chinese bots with the intention of sewing division in America.

But again, the extreme leftists take the bait, and run with these absurd woke ideas.

In the end, they create divisions among their own ranks. Social justice warriors focus on stupid causes that hardly anyone actually cares about.

How silly Facebook looks, for example, for telling people they or their friends may have been exposed to extremist content– as if everyone posting edgy memes is actually a domestic terrorist.

That is proof enough that the meme-lords have power. Trolling has power.

Leave me a comment examples of the trolling campaigns you have noticed having these affects.

If you’re interested in reading The Prince, it’s actually free online, I will link in the description.

Here is an Amazon affiliate link to Erica Benner’s Be Like The Fox, which explores Machiavelli’s life in more depth, to give more context surrounding why he wrote The Prince.