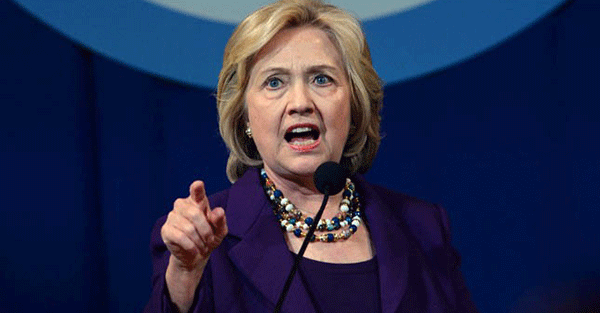 Obama endorses Hillary Clinton: ‘I am with her. I am fired up.’ … President Obama dispensed with his long-held pledge of neutrality in the Democratic presidential race Thursday, backing Hillary Clinton as the most qualified candidate to succeed him in the nation’s highest office.  “I know how hard this job can be. That’s why I know Hillary will be so good at it,” he said in a video message released by Clinton’s campaign. “I am with her. I am fired up. And I cannot wait to get out there and campaign for Hillary.”  – LA Times

President Barack Obama’s endorsement of Hillary for president is a powerful one.

It may well mean that Hillary Clinton becomes President of the United States.

And given the polarizing nature of the Clintons, Hillary’s ascension might usher in a kind of subdued, domestic civil war.

People might not organize to formally fight the federal government.

Instead, the resistance would be covert but continual. No doubt it would lead to a much harsher federal stance as regards civil liberties and presumptive constitutional rights.

The authoritarian and repressive trends now percolating in the US would be considerably aggravated by a Hillary presidency.

President Obama is doing what he can to ensure her election.

And then Obama huddled with Attorney General Loretta Lynch in an Oval Office meeting closed to the media.

Presumably Obama asked Sanders to stop running. And no doubt he emphasized to Loretta Lynch that even if the FBI suggested Hillary’s indictment on charges of espionage and public corruption, Lynch ought not to take action.

It is said there are elements within the FBI that feel very strongly about a Hillary indictment. Even before the larger, public controversy, a kind of internal, federal civil war may commence.

Could Hillary win even if the FBI suggests an indictment? Surveys have already shown that many in the Democratic Party want her to run regardless.

Loretta Lynch refused to bring indictments against the Internal Revenue Service for its mistreatment of Tea Party groups that wanted non-profit tax status.

And it is likely Lynch will not issue a criminal indictment of Hillary Clinton.

The lengthy investigation has been overtaken by events. Hillary is now the presumptive nominee of the Democratic Party. This makes a criminal prosecution even more difficult.

Fox commentator Judge Andrew Napolitano said on Thursday that an endorsement by President Obama of Hillary Clinton would be a major conflict of interest.

Obama’s endorsement of Hillary sends a message to the FBI that the President of the United States wants Hillary to run and win.

Napolitano said Obama’s support of Clinton will potentially impact the hundreds of FBI agents working on the investigations.

“These people are saying … ‘how can we continue with this investigation knowing that our boss wants this person, who is the target of the investigation, to succeed him?’ That’s called a conflict,” said Napolitano.

Napolitano also pointed out that “top secret” information found on Hillary’s unsecured server was sent to her by Obama himself.

Hillary is apparently confident that she will be neither indicted or prosecuted. Thursday evening she said publicly that there is “zero chance” of an indictment.

Napolitano suggested that the only way to have a fair investigation of Hillary’s conduct was to appoint a special prosecutor.

That certainly is not going to happen under an Obama administration.

It might happen if Donald Trump becomes president. But the mainstream media has turned poisonous when it comes to Trump.

He has been branded a racist. Business and personal accusations are leveled and repeated every day.

The constant drumbeat of accusations – and actions – will keep Trump on the defensive. There are even those who suspect Trump entered the campaign to facilitate Hillary’s election in the first place.

Trump was friendly with the Clintons; they attended one of his weddings.

Here at DB, we believed that Hillary was not Obama’s first choice to succeed him.

At one point it seemed he wanted Vice President Joe Biden to run.

And because of what seemed to be Hillary’s obvious mishandling of classified emails, we believed at some point she might be asked to resign in return for a presidential pardon.

We also noted a few weeks ago that the tone of the mainstream media had turned negative about Clinton.

Others in the alternative media noted this as well.

But despite mixed signals, Obama’s decision to endorse Hillary seems to indicate that she is safe … at least as safe as she can be. At least for now.

Obama may have believed this is his best move not just politically but also personally – as it is possible his own involvement in the email mess could generate criminal charges.

There are larger issues here, of course. Obama is not a popular president at this point. And the Clintons seem actively despised by many  millions.

On the other hand, as we pointed out yesterday, both Clintons are handmaidens of the military-industrial complex and can be counted on to pursue policies that support the globalist agenda of elite banking interests.

These banking interests control the US political system and the mainstream media as well.

Barring some unforeseen development it now looks as if Hillary might be president.

Increasingly, Hillary will be seen as a very powerful person. Her enemies will fear her and everyone else in public life will support her.

Meanwhile, the electorate itself is increasingly divided and angry.

Thus Hillary’s ascension may be as declaring a kind of US civil war.

A reprise of the Clinton leadership will surely lead to electoral chaos and fury.But the banking interests running the US should be content with this outcome.

Perhaps it is part of the plan.

Conclusion: Their slogan is “out of chaos, order.” They may well have their chaos. And no doubt will take advantage of it to create a new and more globalist “order.”