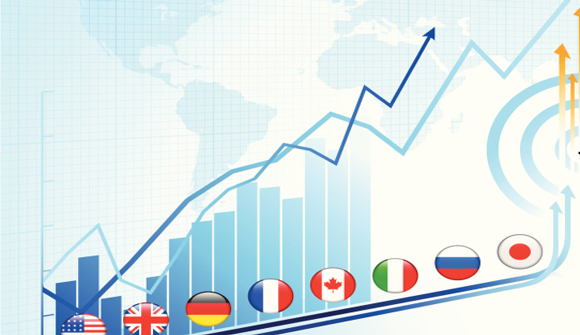 Deflation Isn't What's Holding Europe Back … As the European Central Bank gets ready for quantitative easing, overriding German arguments that buying government debt creates moral hazard in debt-laden countries, it is reacting to the threat of deflation. Yet slow-growing prices aren't at the heart of what ails the euro area, and QE won't fix the deeper problems that are. – Bloomberg

Dominant Social Theme: This deflation will eat away at what's left of our prosperity.

Free-Market Analysis: We are often critical of Bloomberg, but this is a pretty good editorial. At least we agree with part of it!

We've been writing regularly about the inflation versus deflation debate and here comes Bloomberg taking an astonishingly clear-eyed position.

It's easy to see why so many economists are concerned about deflation in Europe. According to a recent report from Bruegel, the Brussels-based think tank, 30 percent of the euro zone's inflation basket is now in negative territory, and that number doesn't even take into account the recent steep drop in oil prices. All of this has led to comparisons with Japan, and warnings that Europe may also be in for a "lost decade."

What evidence we have, however, suggests there's no clear link in Europe right now between declining prices and low growth. According to Eurostat, in the second and third quarters of this year, eight European Union countries — Belgium, Bulgaria, Greece, France, Hungary, the Netherlands, Poland and Romania experienced deflation — that is, the harmonized consumer price index in these countries was lower in September than it was in March. Denmark showed exactly zero change in prices. Yet, of these countries, only Greece showed negative growth over the same period.

Indeed, according to Eurostat's GDP data, the average growth rate in these countries (minus Romania, for which the European statistics agency has no raw GDP numbers) over the two quarters was higher than for the euro area as a whole: 1.3 percent compared with 0.5 percent.

Economists say deflation is dangerous, because when prices begin to fall, consumers delay purchases and stop borrowing. Paul Krugman provided the classic popular explanation a few years ago. But that's not how things appear to work in real life, at least not in Europe right now. In the EU countries that experienced deflation in the second and third quarter of 2014, private spending mostly increased (Eurostat has no relevant data for Bulgaria):

… Perhaps the effects Krugman described are going to manifest themselves yet. But even if the ECB floods the euro area with cash to boost demand, any growth created won't be sustained for long. That's because a relatively tight monetary policy is not the reason all European countries have been underperforming the U.S.

Is this really a Bloomberg column? The article even makes the point (in the above, excerpted paragraph) that no matter how much money is printed, the "string" won't be pushed. In other words, demand drives economies not supply.

This is not something most central bankers want to hear, of course, and thus it is not a sentiment widely reported in the mainstream media. Instead, we get to hear a whole lot about the money printing programs that central banks are embarked upon. No one ever says they can't and won't work – or not as effectively as touted.

The article now turns to other reasons why Europe isn't in the throes of a real recovery. We are subject to yet another viable analysis:

Europe's biggest economies are weighed down by bloated social security systems and severely restricted labor markets. In Germany, retailers have been unable to persuade the government to allow stores to open on Sundays. In France, there's the famous 35-hour workweek. In Italy, Prime Minister Matteo Renzi is only now pushing through legislation that would make it possible to fire workers who have open-ended contracts. In Spain, which has succeeded in driving down labor costs since the 2011 debt crisis, workers are still automatically entitled to 30 days annual vacation plus 12 paid public holidays – more than a typical U.S. employee gets after 20 years of loyal service.

Where have you read that? Nowhere else in the mainstream media … One paragraph sums up the entire, faulty, European industrial system. Europe's consumerist paradigm (not that we agree with it) is failing because of impediments to disseminating an appropriate volume of goods and services.

The article would have been almost perfect if it had alluded to the Austrian perception, surely borne out by now, that economies must be washed clean of their failures in order to participate in economic recoveries.

Together, central banks have pumped something like US$50 trillion into markets worldwide and this has propped up a massively failing economic system and retarded its "recovery" severely. Certainly it has in Europe.

It is probably too much to ask to have one article provide a full gamut of commonsensical free-market solutions. Instead, we ought to be grateful for what the article does deliver. And it not only makes a case for fewer regulations, but also provides us with insights about other EU countries.

East European countries, forced to take the dive after the fall of communism, now have some of Europe's highest growth rates. Latvia, Lithuania and Estonia have business environments closer to the U.S. model than to the European one, and have all been growing faster than the EU average this year.

But this graf also stumbles. From our perspective, the US is not involved in anything near a vibrant recovery and the US "model" the author refers to is a mystery to us.

The US is highly regulated, over-litigated, over-taxed and its economy has been massively distorted by its powerful central bank. In fact, one could argue that it is only monetary stimulation that is propping up the feeble US recovery. Europe, unable to participate in the same kind of money printing, has lagged behind.

But a monetary recovery is not a real one. In the US, we will continue to see a stock market surge (for however long that lasts) and various asset bubbles on the top end of the economy that may eventually lift the entire economy or at least more of it.

Sooner or later they will pop. Bubble-driven economies are surely not reliable. As for Europe, Draghi has the right idea. Europe is not going to deregulate and the EU is not going to put itself out of business. Therefore, there is only one solution: stimulate.

Eventually, the EU will print and the Germans will object. We will see if the EU then tears itself apart. But one thing we are certain of … the specter of "deflation" that Draghi has conjured – price deflation anyway – has been done for political purposes. On every level, Europe is not in deflation. Draghi has printed enormous amounts of money and prices on a variety of goods and services have moved up.

It is very difficult to sustain deflation in a modern central bank economy. Draghi is crying "deflation" only because he wants to print money hard and fast. Evidently, his backers have decided that the printing press is the only solution to Europe's malaise. This solution is being implemented in Japan as well.

If we follow the logic here, we end up with a gradually expanding Wall Street Party that could envelop the EU and even Japan at some point. It is a reason why we believe this party could spread more fully around the world and why it may last longer.

These issues are of import for anyone concerned about Western economies and certainly they should be examined by investors trying to figure out where 2015 is headed.