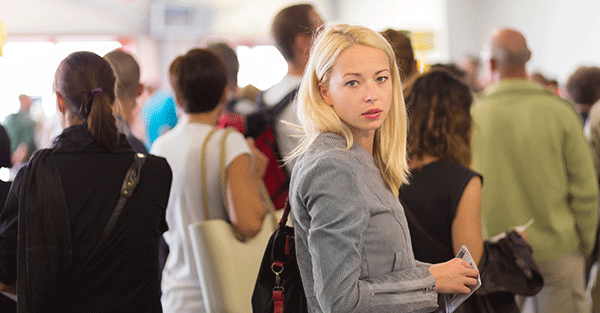 Five questions about extremely long airport security lines Scott Mayerowitz … Already faced with lines that snake through terminals out to the curb, fliers are bracing for long waits at security in the busy months of July and August. Some major airports are currently seeing wait times exceeding 90 minutes at peak hours.  Here’s a look at the problem and what travelers should expect.  –USA Today

The entire US mainstream media is not able to remain coherent regarding the “extremely long airport security lines” that have received so much attention recently.

There is still NO reporting on the obvious reality of what has occurred:

What’s that? That Homeland Security has created an airport disaster and caused tens of thousands to miss flights in order to force people into its PreCheck program.

We explained this several days ago in an article entitled, “Homeland Security Creates Travel Havoc to Force People Into PreCheck Programs.”

It pointed out that the PreCheck program, according to the TSA and Homeland, was not a success.

It also pointed out that the TSA has been embarked on a process to make airline check-ins more rigorous.

The confluence of events leading up to this point started last year when a TSA internal investigation revealed security failures at many of the nation’s busiest airports, where undercover investigators smuggled weapons through checkpoints in 95% of trials.

This caused the TSA to tighten screening methods and stop procedures that helped facilitate the faster flow of passengers, such as allowing TSA officers to use their judgment in moving certain people, such as families with children or the elderly, into the PreCheck lines.

And we pointed out The TSA and Homeland must have known that wait times would rise with more rigorous screening.

These are important points but you won’t find them in most of the millions of words being written by this sudden airport, wait-time crisis.

You could understand the lack of information in the initial article. But here is week #2 of coverage and if anything the propaganda and missing information has grown worse.

Over the weekend and into Monday, PreCheck boosterism became even more blatant if that were possible.

Here is one recent article from USA Today entitled “What is TSA’s PreCheck expedited screening program?”

The article takes the form of a Q and A  but never once touches on the idea that the current disastrous wait-times are purposeful.

Q: Why are the waits so long?  A: More people are flying, thanks to a mix of a strong economy, more flights and lower fares thanks to cheaper oil. At the same time, the Transportation Security Administration and Congress cut the number screeners by 10 percent on expectations that an expedited screening program called PreCheck would speed up the lines.

However, not enough people enrolled. The TSA had been randomly placing passengers into the faster PreCheck lanes but that stopped in the fall after government auditors found lapses in security.

We can see the article mentions PreCheck right away. And it also provides reasons for the expanding lines.

But the article doesn’t tell the truth about those wait lines. It never explains that the wait-lines are part of a conscious policy implemented by Homeland Security.

In just a relatively few sentences, the article tells a lie and leaves out its most important point.

A recent article posted at a local NBC website doesn’t even try to conceal the linkages. It is actually an AP article entitled, “As security lines grow, is TSA’s PreCheck worth it.”

Fliers facing extremely long airport security lines this spring and summer might want to consider becoming members of the Transportation Security Administration’s PreCheck, an expedited screening program that can speed travelers through the checkpoint. That could come in handy at airports notorious for long wait times.

We can see the article doesn’t try to answer the question it poses in its headline. It simply asserts right away that PreCheck could “come in handy.”

An article that was more than propaganda would provide information on privacy concerns regarding PreCheck. But we are not dealing with normal articles here.

The entire torrent of articles on airline wait times over the past week provides us with yet another example of what we call dominant social theme – an elite meme.

It is a social manipulation masquerading as journalism.

The PreCheck program is a way for Homeland Security to keep track of passengers and travel flows.

Even more importantly it is the beginning of a system that will allow Homeland to dictate who can travel when and where. It is the first, active step to government control of long-distance travel.

Homeland Security created the current wait-time airport crisis and did so to force people into its invasive PreCheck program.

After more than a week’s worth of coverage, thousands of articles and millions of words, the reality of Homeland’s manipulation has not once been examined or reported on in the mainstream media from what we can tell.

Conclusion: This is stunning indictment of US mainstream journalism and proves yet again the comprehensive level of control excerised over the media by Fedgov and the shadowy powers behind it.