A strange thing happens when you don’t trust the government. You take responsibility for your actions, instead of shirking your duty and handing off the burden to the collective.

I’ve long suspected this. People assume the government will actually do what it says it will. If you think your tax dollars will feed the hungry, house the homeless, and provide for the poor, why bother donating to charity? You have done your part.

This comes down to differences in the collective versus individualist philosophy. 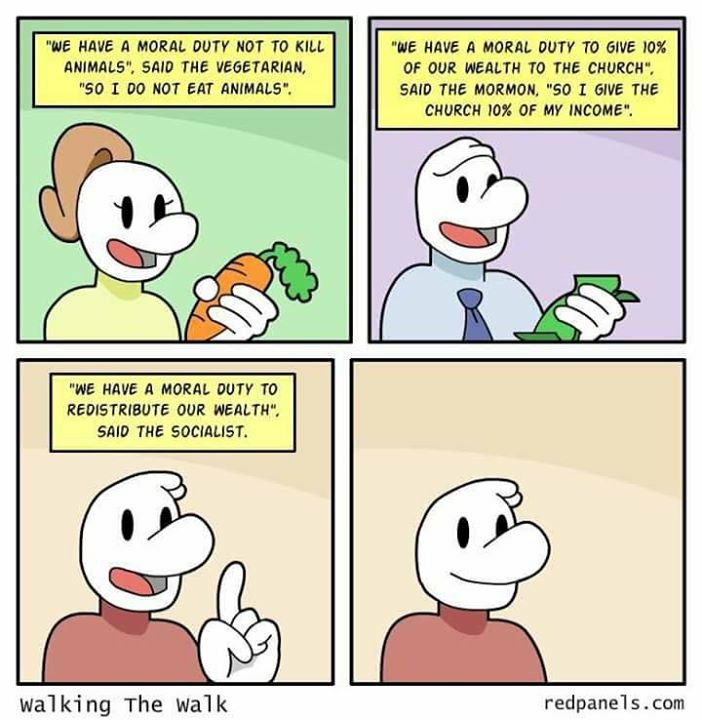 Collectivists favor a top-down approach. They want the government to force everyone to do their part–or at least what the collectivist thinks is their part. But notice the burden tends to be on someone else… It’s the rich that need to pay their fair share, while the collectivist apparently already does pay his or her entirely subjective fair share.

Individualists, on the other hand, value freedom, and don’t want the collective to force its will on people. They believe that individual action can culminate in large-scale solutions. But they also believe in personal responsibility. Yes, people should be free to do what they want, but when their actions harm others, that individual should be held responsible.

So an individualist values the principle of personal freedom, but they also may value a clean healthy environment. Yet based on their philosophy, the ends cannot justify the means. You can’t sacrifice personal freedom with the hope of helping the environment.

This difference is why a recent study on attitudes towards climate change should come as no surprise.

A study by Cornell and the University of Michigan researchers found that those “highly concerned” about climate change were less likely to engage in recycling and other eco-friendly behaviors than global-warming skeptics.

Published in the April edition of the Journal of Environmental Psychology, the one-year study broke 600 participants into three groups based on their level of concern about climate change: “highly concerned,” “cautiously worried,” and “skeptical.”

The skeptics were the more likely than the “highly concerned” to recycle, use public transportation and reusable shopping bags, and buy eco-friendly products.

“Belief in climate change predicted support for government policies to combat climate change, but did not generally translate to individual-level, self-reported pro-environmental behavior,” said the paper.

Why? Even the researchers were stumped, although it’s possible that skeptics may place more emphasis on personal responsibility than government action.

“These results suggest that different groups may prefer different strategies for addressing climate change,” said the paper. “Thus, belief in climate change does not appear to be a necessary or sufficient condition for pro-environmental behavior, indicating that changing skeptical Americans’ minds need not be a top priority for climate policymakers.”

“So while they may assert disbelief in order to stave off coercive (in their view) actions by the government, many could take pride in doing what they can do on a personal basis,” he said in a Friday post.

The authors note that changing people’s minds is not necessary to address climate change. Individualists actually are doing “their fair share” to improve the environment, while collectivists are focused on bullying everyone into agreeing with them… but not actually doing anything to help!

I’ve written about this before when a “progressive” complained that we called the mini-farm Prickly Pear Plantation. He ignored the solar panels, rainwater collection, happy healthy free-range chickens, organic gardens, and recycled materials used in building farm infrastructure. All he cared about was being offended by a word he associated with slavery.

Unsurprisingly, my network consists of many individualists. The harshest critics of the Federal Reserve are the most likely to use cryptocurrencies. Recognizing the evils of socialism, we used cryptocurrencies to transfer money across borders which allowed a family to flee Venezuela. Dissatisfied with the manipulative media, a friend of mine started an internet tv broadcasting social network called badmirror.tv (which is also funded with cryptocurrencies).

I personally don’t want to rub chemicals all over my body. So did I petition the government to strictly regulate what can be put in hygiene products? No, I started making my own soap, toothpaste, and deodorant. I interact daily with the free-range chickens that lay the eggs I eat. I walk past four beehives to work in the food forest which is restoring the soil and will provide healthy food for generations. These are things I care about, but I don’t feel it is my place to try to force others to care.

Joe Quirk believes that Seasteading is a viable way to provide better governance, sustainable ocean farming, cheap and effective healthcare, protection against a rising ocean–and all while having a positive impact on the environment. That’s why he did the research, wrote a book, negotiated with governments, and is building the first seastead off the coast of French Polynesia.

Gabriel Scheare wanted to live in a like-minded community for people to work, live, learn, and start businesses. So he is building one.

Jean-Loïck wanted a co-living co-working space that could grow into a worldwide distributed mutual aide style society. So he started one.

The point is, if you believe in something, prove it. Everyone can talk the talk. But anyone who is not walking the walk is saying through their actions that they expect someone else to take care of the problem.

Change will happen through individual action, not through trying to force authorities to mandate change. That only leads to oppression and the negative effects which stem from coercion.

You have much more power as an individual than you may realize. In fact, that is the whole theme of our free guide, which teaches you how to reclaim three types of freedom, in just two years.