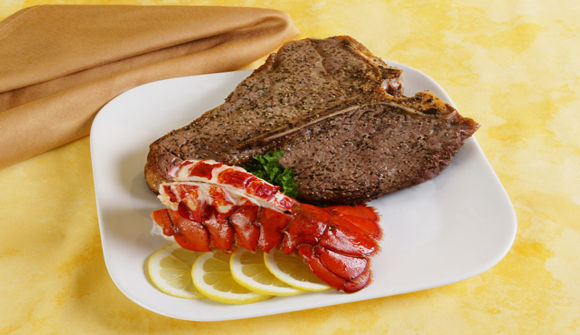 In 2013, Fox News proudly broadcast an interview with a young food stamp recipient who claimed to be using the government benefit to purchase lobster and sushi.

"This is the way I want to live and I don't really see anything changing," Jason Greenslate explained to Fox. "It's free food; it's awesome."

That story fit a longtime conservative suspicion that poor people use food stamps to purchase luxury items. Now, a Republican state lawmaker in Missouri is pushing for legislation that would stop people like Greenslate and severely limit what food stamp recipients can buy. The bill being proposed would ban the purchase with food stamps of "cookies, chips, energy drinks, soft drinks, seafood or steak."

"The intention of the bill is to get the food stamp program back to its original intent, which is nutrition assistance," said Rick Brattin, the representative who is sponsoring the proposed legislation. – Washington Post, April 3, 2015

Limited government advocates may find a certain emotional satisfaction in proposals like that of Rep. Brattin. If we must have programs like food stamps, let's at least attach some reasonable restrictions. Taxpayers shouldn't have to shower luxury items on those the government deems unfortunate.

On further thought, however, the issue is more complicated than it seems.

Mr. Brattin is only half-right about the food stamp program's original intent. Feeding people was only one side of the equation back in 1939. The other side was to help farmers sell "surplus" food. That's why, even today, the U.S. Agriculture Department administers food stamps.

Was that food truly "surplus"? Free-market economics 101 says no. The fact that a market-clearing price is below the level farmers think they deserve does not mean the market failed. It means the farmers overproduced. Programs that encourage overproduction deliver no net benefit to society.

Nevertheless, if helping food producers is the program's true purpose, why exclude those who produce cookies, chips, energy drinks, soft drinks, seafood or steak? Are they less deserving than broccoli and tofu farmers?

The proposal is fiscally questionable as well. If the goal is to deliver maximum calories to the poor at minimal cost to taxpayers, then food stamps should cover only cookies, chips and soft drinks. Encouraging the poor to live on free-range chicken and organic kale might help their health but is far more costly in the short term.

We could also reasonably ask why this idea should stop with food stamps. Maybe we should forbid government employees from using their pay to buy cigarettes and soft drinks. It isn't good for their health and taxpayers will end up paying for expensive medical care.

The same principle might apply to Social Security recipients, veterans, defense contractors, hospital administrators, pharmaceutical executives and anyone else who depends on taxpayers for all or part of their income.

We can chase this rabbit all day, of course. The broader point is that when you let government make decisions that should be market-driven, you will receive inefficiency, waste and sub-optimal results.

Worse, some of the waste is intentional. Food stamps (or the politically correct SNAP) is arguably welfare for Cargill and Conagra. Such firms are its greatest beneficiaries and fiercest defenders.

One man's welfare is another man's profit margin. In various ways, we are all on both sides of the fence. That's why it is so hard to change the system. One way or another, most of the population are welfare queens.