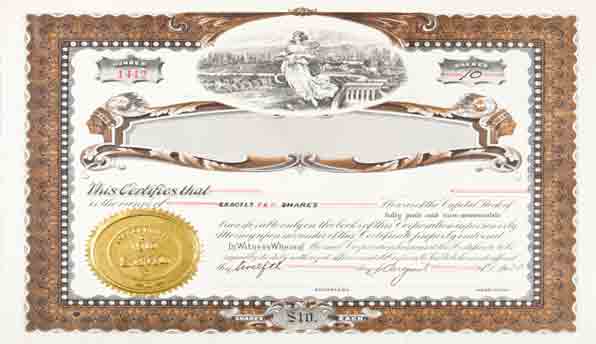 Class V shares would grant their owners extraordinary voting powers, akin to the 10 votes per share that Google, GoPro or Facebook Class B shares carry. But unlike B shares, this would only last for a defined period, say 10 years. In that sense, they would resemble voting options that need to be exercised before they expire. After a decade, Class V stock would simply convert into regular Class A common equity. This would give founders time after going public to develop a company's business with minimal scope for interference from shareholders. Including the years before listing, they should have long enough to navigate the headiest phase of growth unencumbered. And winding down voting rights at a defined date should reduce the risk that company bosses and boards become entrenched. Class V equity would address the hazards of founders overstaying their welcome. – Reuters Opinion

Dominant Social Theme: We need to fiddle with the corporate structure until it is fair.

Free-Market Analysis: So here is yet another wrinkle, Class V shares. Are they, finally, a panacea?

Corporations get bigger and bigger, and the people running them accumulate more and more power and wealth. That would be fine if corporations were an outgrowth of the free market. But they are not. Corporations are the product of very specific legal decisions that are – logically – enforced by the power and authority of the state. The modern corporation, in fact, like the modern central bank is something visionary US founding father Thomas Jefferson cautioned against.

The Constitution was written in such a way as to avoid legitimizing what has today become the multinational corporation. It took a Supreme Court decision in the late 1800s to establish the beginnings of modern corporate personhood. Thomas Jefferson and some other founding fathers surely began to spin in their respective graves. They'd had no wish to visit another English East India Company on the world.

The East India Company and then the Dutch East India Company were chartered with monopoly rights that gave them great power and authority. Monarchs provided them royal charters and the span of their powers were virtually unlimited. The English East India Company would come to rule parts of India with its own private armies and to exercise various forms of public and private power.

In the modern world, given the expansion of corporate personhood, we are beginning to see once again the assumption of great power by multinationals. However, the quasi-fiction that corporations are outgrowths of the free market remains and gives rise to increasingly convoluted arguments over how best to "control" large corporations within the context of 21st century business and investment.

Over dinner in San Francisco recently, an activist investor and an internet entrepreneur got into a heated discussion. The two men, with a gap of about two decades between them, were debating the practice of many young, growth businesses in the technology world – though it happens elsewhere too – to issue multiple classes of stock, generally one for hoi polloi investors in public offerings and another for founders and other insiders with super-charged voting powers.

This, the investor felt, violates a tenet of democratic capitalism: "one share, one vote." It treats public shareholders of Silicon Valley's hottest properties as second-class citizens. Not so, argued the information industrialist, now working in his second mega-startup. Visionaries need to build their businesses without the distraction of having to please uppity investors every quarter. Giving them control of their boards of directors and key corporate decisions is vital.

… Visionaries need to build their businesses without the distraction of having to please uppity investors every quarter. Giving them control of their boards of directors and key corporate decisions is vital. The protagonists sort of agreed to disagree. Investors don't have to buy shares if they don't like the voting arrangements – though some might say that companies often don't have to seek money from public investors, either.

But surely there is a way to square this circle. What if a mechanism could be created that would allow founders like Facebook's Mark Zuckerberg or GoPro's Nicholas Woodman to execute their plans for global domination, leavened with promises to make the world more awesome, without pesky shareholder interference – but also preserving in the long term the one share, one vote concept? Say hello to "Class V" stock.

There are already lots of companies with Class A and B shares, and a few – like Google – with C shares. Going all the way to the 22nd letter of the alphabet sounds unduly complicated. But it's just another symbol, standing for "voting," or maybe "vision." … The structure gives visionary founders the initial autonomy they want and investors are usually willing to give them, while eventually allowing all shareholders to have a say if company leaders don't deliver the goods – or aren't as good at managing businesses as starting them.

The structure of Class V stock is explained in the Reuters excerpt at the beginning of this article. And it certainly makes sense from a corporate governance standpoint. But we can't help believing corporate governance is a kind of fiction as well. The idea that these multi-billion, world-spanning corporations are beholden to shareholders strikes us as slightly naïve.

Just to reassure viewers that we are not alone in our perception of corporate personhood, here's Julie Beck on the subject in a "great debate" post over at OccupiedTimes.com.

When courts create or assume facts, we call them legal fictions. They are often counterintuitive, and should not be used to circumvent an existing rule or real facts. One common example of such a fiction is corporate personhood. Historically, the concept was established after the Industrial Revolution; before this, it was the owners who were liable for the debts of the business.

With the advent of corporations, business owners enjoyed limited liability, and to resolve the issue that corporations could not be sued, courts created the fiction of corporate personhood. The concept was reaffirmed in the 1970s, after which corporations barged into the fields of lobbying, political financing and began exerting their power over governments and in court.

Beck concludes with the point that, "What is needed is a profound change in the definition of the relationship between human beings and corporations, and to make corporations legally subordinate to humans and the government again."

We would tend to agree with this and would also point out that like so many other modern conundrums the solution is fairly simple. Return to the original US definition of the corporation before the Supreme Court began to support its "evolution." This is akin to conservative-libertarian presidential candidate Ron Paul's perspective regarding the US's foreign wars. "We walked in," he is fond of saying, "and we can walk back out."

You can see some other articles of ours on corporate personhood here:

Reforming the Corporation: How Far Does One Go? Not Far Enough …

We recommend the following for historical purposes:

The Artificiality of Corporations

We have every expectation that the globalists that have orchestrated monopoly central banking will continue to promote "governance" as a remedy for multinational overreaching. But judicial decisions have empowered the modern corporation and it will take a repeal of various judicial decisions to generate economic sanity once more.

Without the shield of legal personhood, people would be responsible for their actions directly and it would not be possible to continue for long with harmful corporate policies. More importantly, if you combine the removal of monopoly central banking with an absence of corporate personhood, the result would be a much slower pace of industrialization and consumerism.

The marketplace would surely respond with smaller communities and more individual input into these communities. Large industrial efforts would be comprised of flexible partnership linkages that would dilute the power of any one decision-maker.

In a real marketplace, corporations would be run in a far more flexible and democratic fashion. Goods and services that are so relentlessly promoted might well fall away or become less influential. Many industrial solutions would be regional again as they once were.

There is in fact a reason that smaller ventures and entrepreneurial startups attract investment on a regular basis where large corporate efforts are less apt to attract such grassroots support.

Generally, legal cannabis is driving of a number of well-received ventures. Many of these may be corporations but they are still small enough to be both responsive and judiciously aggressive.

It is always fashionable in the modern era to fiddle with corporate governance in order to give shareholder-owners more power and clout. But this is really not feasible because the root of the problem is the initial and growing judicial endorsement of the corporation-as-person.

Additional governance is not the solution to corporate overreach.