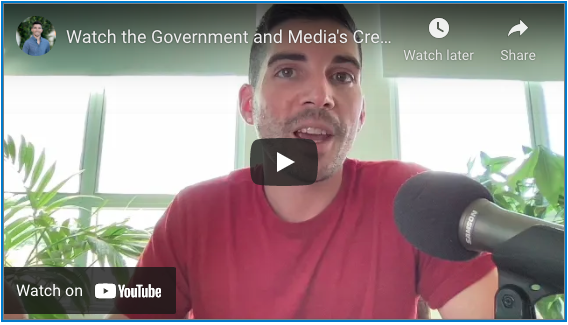 I’m back after a brief hiatus.

YouTube deleted my last video for COVID misinformation (I literally read information from the CDC), around the same time that Puerto Rico, where I live, implemented a vaccine passport, and the Biden Administration increased its use of unconstitutional dictatorial edicts to rule.

This all can be overwhelming. But there are some signs that the tide is shifting against the authoritarians. How much longer can they expect people to trust, or even listen to institutions like the Federal Reserve, media, military, scientists– which as I discuss in today’s video, have all shown massive conflicts of interest, just over the past few weeks.

After spending my free time reading Stoicism and Buddhist meditation, I decided the only solution is to forge ahead with building parallel economies to replace the collapsing and untrustworthy institutions we currently rely on.

I get into this a bit at the end of the video, and there will be much more on the subject to come.

Articles I talk about in this video:

Biden administration moves to stave off shortages of monoclonal antibodies

The COVID-19 Hospitalization Metric in the Pre- and Post-vaccination Eras as a Measure of Pandemic Severity: A Retrospective, Nationwide Cohort Study

Revealed: How scientists who dismissed Wuhan lab theory are linked to Chinese researchers

Obesity in children accelerated during the pandemic