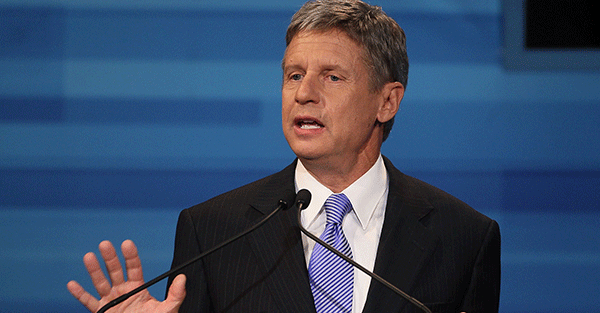 Here’s Why Libertarian Candidate Gary Johnson Isn’t Ready for Primetime  …  American voters will need more details to jump to a third party candidate like Johnson. The Libertarian Party had one of its most high-profile tests in its history on Wednesday night when both members of its 2016 presidential ticket answered questions during a town hall aired on CNN. They might want to ask for a makeup exam.-  Fortune

When we point out dominant social themes, we usually do so within the context of mainstream media propaganda.

But this article posted at Fortune makes legitimate points about the Libertarian party and its current nominees.

The problem with the Libertarian party is that to be a libertarian means you don’t believe people ought to be forced to behave a certain way.

But government is all about force.

So running for political office within a libertarian context is a kind of contradiction in terms.

This Fortune article points out some of the contradictions.

Johnson often hesitates to make a full-throated endorsement of the libertarian vision of significantly smaller government … When asked whether he would replace Obamacare as president, Johnson hedged, saying that he was running for president, and not Congress.

… In an interview with Fortune last week, Johnson was coy when asked about how he would both eliminate the corporate income tax and present a balanced budget to Congress as his “first major act,” something he promises to do on his campaign website.

So Johnson is not committed to ending Obamacare and isn’t forthright about eliminating taxes or balancing the budget.

He sounds a lot more concerned with policy than philosophy.

We don’t think the federal budget ought to be balanced anyway. It should be downsized into oblivion. Johnson doesn’t seem to think so.

As for Obamacare, it should never have been passed to begin with. And, no, it shouldn’t be replaced. Just let it lapse.

Let medicine and health care be delivered the way they were before World War II.

The market should govern health care, not the federal government.

As for taxes, Johnson apparently argues he would get rid of income taxes and fund government via a sales tax.

His vice president, according to the article, won’t even go that far and doesn’t believe the IRS needs to be abolished.

Just yesterday we posted an ARTICLE explaining that government programs, no matter how well meaning, are basically price fixes. And price-fixing doesn’t work. It just distorts the economy and diminishes prosperity.

The best thing the Libertarian party could probably do is to educate people on the reality of government intrusion and how even its quietest touches are destructive.

Instead, it sounds like these Libertarian candidates are caught it up in defining what federal programs they want to keep and how forcefully they want to impose them.

This is probably one reason the Libertarian party regularly attracts about one percent of the vote.

That’s not much. And there’s a reason for it …

It’s not educating people. It’s just coming off as a less regulated version of the Republican party.

Conclusion: First and foremost the Libertarian party should be offering a moral philosophy of independence and human dignity. Instead it sounds like its more concerned with parsing policy. Not impressive to anyone.